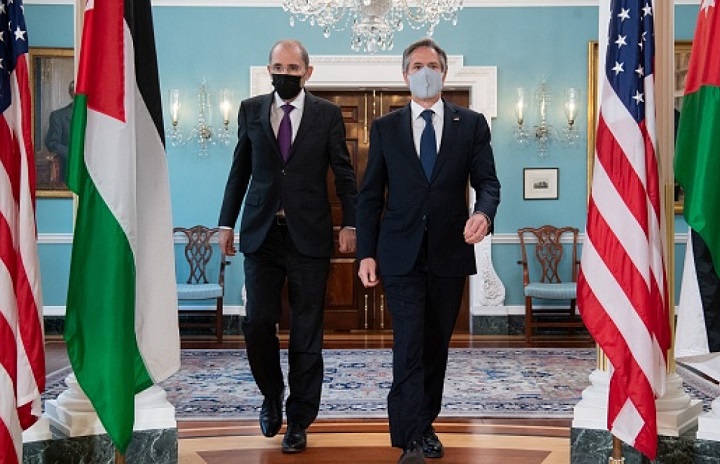 On Friday 16/9/2022, the Jordanian Deputy Prime Minister and Minister of Foreign Affairs and Expatriate Affairs Ayman Safadi and the US Secretary of State Anthony Blinken signed, in Washington, a new memorandum of understanding on strategic relations between the two countries regarding the financial aid that America intends to provide to Jordan for the next seven years, guaranteeing America’s commitment to the Kingdom’s security and stability. According to a statement issued by the Jordanian Ministry of Foreign Affairs, the two ministers signed the memorandum, which is the fourth between the two countries, where America will provide an aid worth 1.45 billion US dollars annually, for seven years, starting from the fiscal year 2023 and ending in 2029, which is the largest and longest period of aid provided by America to Jordan.

After emerging as a rich and a powerful country at the end of World War II, America, with its cunning colonial power, has made foreign aid as a top priority, and this is included in the US budget under the name of maintaining national security. Since it entered the Middle East as a new colonial power, aid and financial support, which does not exceed 1% of its budget, is one of the modern colonial methods that America follows in colonizing nations and extending control and influence, and it is as important and harmful as the direct military colonialism. These techniques that are carried out by colonial countries are ways of acquiring political loyalty and creating dependence in all fields including politically, militarily, economically and security.

The memorandum of understanding signed by the Jordanian regime with America is not an understanding on the financial aid that America will provide to Jordan, but rather a bilateral memorandum of understanding on the strategic partnership between America and Jordan. These memorandums would not be presented to Jordanian Parliament, and are not legally or internationally binding as an agreement of intent, and the most important of all is that it contains multiple secret clauses, which are not revealed by the two parties but are usually in favor of the strong donor country, while the weak and needy country complies to it with all its undeclared dictates, and it is definitely different of what the Safadi has declared in a private interview with the Kingdom, that “the aid is unconditional and subject to increase.”

The mutual statement, on the signing of the bilateral memorandum of understanding on the strategic partnership between America and Jordan, which was announced by the US State Department spokesperson, stated that “America’s commitment to Jordan’s security and prosperity is firm, and this memorandum of understanding will address the extraordinary challenges facing Jordan, as it mitigates the heavy impact of regional challenges, and supports King Abdullah II’s economic program of reform, and affirms a long-term strengthening of the US-Jordanian partnership.”

As for the conditions of the aid, which the Jordanian Foreign Minister denied their existence, the details of the memorandum of understanding as we mentioned are confidential, apparently insulting, but the Jordanian people are used to not believing the government’s statements, when it comes to the relationship and agreements, between the government, America and the Jewish entity, and which the official local media do not mention. The reality that the Jordanians see and live in belies of these agreements, for which America pays Jordan these aids and shows support, in exchange for what it gains and achieves from consolidating its national security to achieve its interests in Jordan.

Aaron David Miller, a member of the Carnegie Institution, said about this Memorandum of Understanding: “The increase of the bilateral assistance, in the context of the memorandum of understanding, will be a small investment, as the United States shifts its priorities to Asia.” (Axios)

America has achieved great benefits, thanks to the joint defense agreement with Jordan last year, and it strengthened its military presence in more than 14 bases and sites, making Jordan a major center for the stationing of its forces in the Middle East. These forces are not subject to local laws or monitoring and have the freedom of movement. It is without doubt that the military roles required by the Jordanian forces are the most significant undeclared understandings, and America, through its governmental and non-governmental organizations, imposes corrupt secular international values and laws through the conditions for providing aid to community, educational, health and economic institutions, and laws to empower women, and the Child Law that has been passed cunningly, and deceitly without any action from the Jordanian Council Representatives is only one example.

Because of this aid, and the so-called partnership and strategic relationship, as the memorandum of understanding calls it, the American ambassador visits local and municipal institutions and delivers his poisonous instructions without any accountability or supervision, and this aid flows within the framework of the Wadi Araba agreement within America’s strategy to support the Jewish entity and the countries that have made peace with it, and mutual economic and regional agreements with both, such as the Agreement of Intentions for Energy, Gas and Water.

As for the justifications offered by the Jordanian and American sides to cover up the missions of the many memoranda of understandings, they have been exposed to the conscious public opinion about their tricks since this aid began in the 1950’s. The support includes support for the budget deficit and the exorbitant debt that was caused by America, through its tool, the International Monetary Fund. Other missions of the memoranda of understandings include the privatization of successful projects, and the reluctance to exploring the enormous wealth in order to justify the need for these aids. Poverty in Jordan is unreal and does not need US financial or political support. Rather, it needs the principle of true Islam and the sincere leadership of the Nation of Islam to prevent the looting of its wealth and to eliminate the influence of the infidel colonizer and his tools.

In order to liberate the country from American and European colonialism, in all of its military, political, economic and cultural forms, this colonialism must be expelled. The financial aid that created the need for it when the Muslim countries are blessed with wealth, and to which the dependent regimes have acquiesced and practiced promoting their support in order to maintain the stability of their rule, these regimes will inevitably vanish because they rely in on the forces of disbelief (kufr) and colonialism, which will not be harmed by abandoning them as they abandoned those before them, and that is when the Western colonizer will be in real confrontation with the nation soon. This nation who is in continuous effort to resume Islamic life through the return of the Khilafah Rashidah (rightly-guided Caliphate) State.