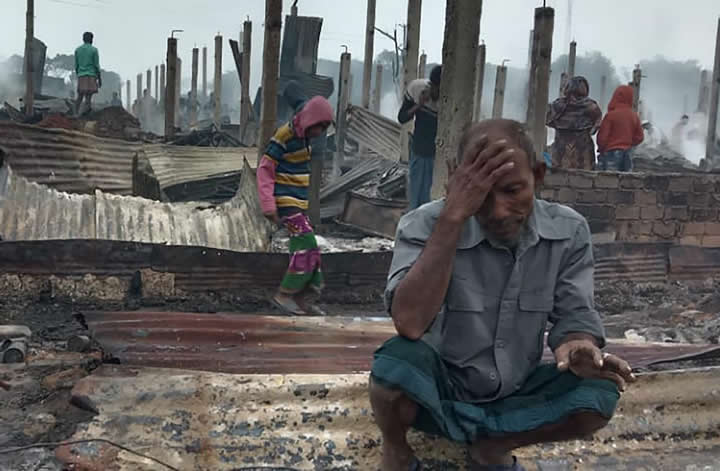 A massive fire that broke out on Monday, 22/03/2021, in the Rohingya refugee camps in the border area of ​​Cox’s Bazaar, in the southeast of Bangladesh, has killed at least 28 people, according to statements made by Kyaw Win, Executive Director of the Burma Network for Human Rights, to Anatolia News Agency, at dawn on Wednesday. It also injured 560 others, and about 400 people are still missing, according to statements by Johannes Van, an official at the UNHCR branch in Bangladesh. The fire left about 50,000 people homeless after the flames devoured their rudimentary huts made of bamboo and tarpaulin. This is the third fire to hit the camps within four days, an official in the fire service told the French News Agency, adding that the causes of the fires are still unknown.

These successive fires in the Rohingya refugee camps in Bangladesh, and the disastrous results and painful scenes that resulted from them, prove the failure and negligence of the Hasina government to support the Rohingya Muslims and provide them with real care and protection, after they resorted to fleeing the barbaric repression and brutality campaigns waged by the criminal Buddhist army and militias against the Muslims in the province of Arakan for nothing except for their saying that Allah is our Lord. So their condition was like the one seeking refuge from heat in fire.

These refugees live in camps that lack the basic necessities of life; they live in fragile tents that do not protect them from the heat of summer or the cold of winter, surrounded by barbed wire, so that the camps become like prisons for criminals. Furthermore, these barbed wires have been a hindrance for refugees trying to escape from the fire and rescue themselves in light of Hasina’s government’s negligence and failure. Refugees International said in a statement that “Many children are missing, and some were unable to flee because of barbed-wire set up in the camps”, which was also confirmed by the testimonies of the refugees themselves. Hasina’s government was not satisfied with fencing the refugee camps with barbed wire and restricting their movement, but also transported thousands of them to a remote island prone to floods and hurricanes. There is no strength or power except in Allah Almighty.

This negligence and failure by Hasina’s government that follows the enemies of Allah and His Messenger and establishes treaties and deals with Kufr states that oppress Muslims, such as India, is not surprising, just as it is not surprising from all the ruling regimes in the Muslim countries, which make their allegiance to the enemies of Islam and Muslims, instead of making their allegiance to Allah, His Messenger and the believers. We see them move their armies in response to the orders of the infidels in their colonial wars in Muslim countries, as Erdogan did in Syria and Iraq and as the Saudi regime did in Yemen, while they do not move them in support of the oppressed Muslims in Burma, East Turkistan, Sri Lanka and other Muslim countries. We see them opening their borders to foreign aircraft, military bases and companies to plunder the wealth of Muslims, while closing them in the face of the refugees. And even when they open the borders to them, they place them in camps, many of which are called death camps.

O Muslims: It is time to uproot these puppet criminal regimes and establish the second Khilafah Rashidah (rightly guided Caliphate) State on the method of Prophethood, on the ruins of their thrones, so it rules by Allah’s law, establishes justice, helps the oppressed, and takesretribution upon the oppressor.