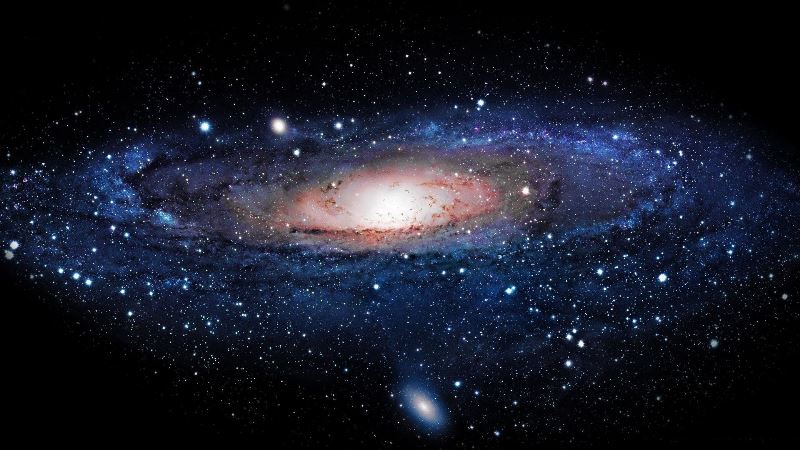 Astronomers have recently reported, after modelling images collected over 20 years by the Hubble Space Telescope, that there are over 2 trillion galaxies in the universe, up to 20 times more than previously thought. The research, which was published in the Astronomical Journal, is considered the most comprehensive ever. It also highlighted, that due to current technology limitations, this figure could increase in the decades ahead.

Allah سبحانه وتعالى informs us in the Qur’an:

“Allah created the heavens and the earth, and all that is between them, in six periods.”

Allah سبحانه وتعالى then informs us of how He did this:

“the heavens and the earth were joined together as one unit, before We separated them and made from water every living thing”

“It is He who created the night and the day, and the sun and the moon; all (the celestial bodies) swim along, each in its rounded course.”

Allah سبحانه وتعالى explained in the Qur’an that all of the created universe are signs of His existence:

“And among His Signs is the creation of the heavens and the earth, and the difference of your languages and colours. Verily, in them are indeed signs for men of sound understanding.”

Throughout history, mankind’s thirst for the great unknown drove discovery, science and knowledge. The oceans were traversed once humans had reached the limits of continents. The Americas discovered in a similar way during the era of discovery. In time, man travelled beyond the planet Earth. Whilst the West dominates Space travel today, space has come to be understood by many through science fiction movies and numerous fantasies. The fact that there may be life out there has led to many to not see the power of the Creator and confirmation of His existence. The sheer scale of the world beyond our planet is mindboggling and it is this that shows the majesty of the Creator.

Our earth is one planet in the solar system which consists of other orbiting planets along with numerous moons, asteroids, comet material, rocks, and dust. At the centre of our solar system is our star – the Sun, which is over 93 million miles away. Our moon is a mere 250,000 miles away from Earth. The furthest object that orbits our sun and is therefore part of our solar system is the Oort Clouds of icy objects, which are nearly 11.6 trillion miles away. At such distances, it would take NASA’s New Horizons spacecraft, the fastest object ever launched from Earth 37,000 years to reach the edge of our own solar system. This means one side of our Solar system to the other side is a distance of over 4 light years or in miles 4000 with 13 zeros after it.

When we leave the solar system, we find our star (the sun) and its planets are just one small part of the Milky Way galaxy. A galaxy is a system of billions of stars, held together by gravity, with planets within them. The Milky Way is a huge city of stars, so big that even at the speed of light, it would take 100,000 light years to travel across it. So far, astronomers have found more than 500 solar systems in our own neighbourhood of the Milky Way galaxy; scientists estimate that there may be as many as 100 billion in our galaxy. Our solar system can be compared to the nations we have on earth, with the Galaxy Milky Way being the continents.

All the stars in the night sky, including our Sun, are just some of the residents of this galaxy, along with millions of other stars too faint to be seen. Beyond our own galaxy lies a vast expanse of galaxies. The deeper we see into space the more galaxies we discover. There are billions of galaxies, possibly over a trillion, the most distant of which are so far away that the light arriving from them on Earth today set out from the galaxies billions of years ago. So we see them not as they are today, but as they looked long before there was any life on Earth.

Using new mathematical models, astronomers were able to infer the number of “invisible” galaxies beyond the reach of telescopes, leading to the realization that the vast majority are too faint and far away to be seen. The furthest thing that humans have ever seen is a great 13.4 billion light years away, which was a galaxy named GN-z11.

Whilst humans have visited the moon and orbited earth regularly, the immense distances involved in travelling to other places, within our own solar system, let alone the vast emptiness between our solar system and those of other stars is beyond the reach of even the most extreme human ingenuity. Planet Mars is 36 million miles away, whilst Proxima Centauri, the nearest star is 24 trillion miles away. Any journey of discovery would need a spacecraft that can be powered over such long distances. Astronauts would need to be kept safe from the perils of radiation and the muscle-and-bone-wasting effects of microgravity. They would also need to be fed and watered over such long journeys and if they reached their destination they would need to find a way to communicate back to Earth. Voyager 1 and 2 – two robotic spacecraft were launched from earth back in 1977 and they are only now just exiting in our solar system, 11.66 billion miles away from earth.

The sheer size of the known universe is to a large extent beyond comprehension, the unknown universe which is likely to become known over the decades and centuries ahead is at such distances that scientists will need to come up with new ways of measuring such vast distances. The enormous size of the universe is beyond the tallest building and most complex infrastructure built by man and what we, as humans learn, as we discover more of His creation is that there is nothing within in universe that could have created such vast, enormous, complex, organisation aside from the Creator Himself – Allah سبحانه وتعالى.