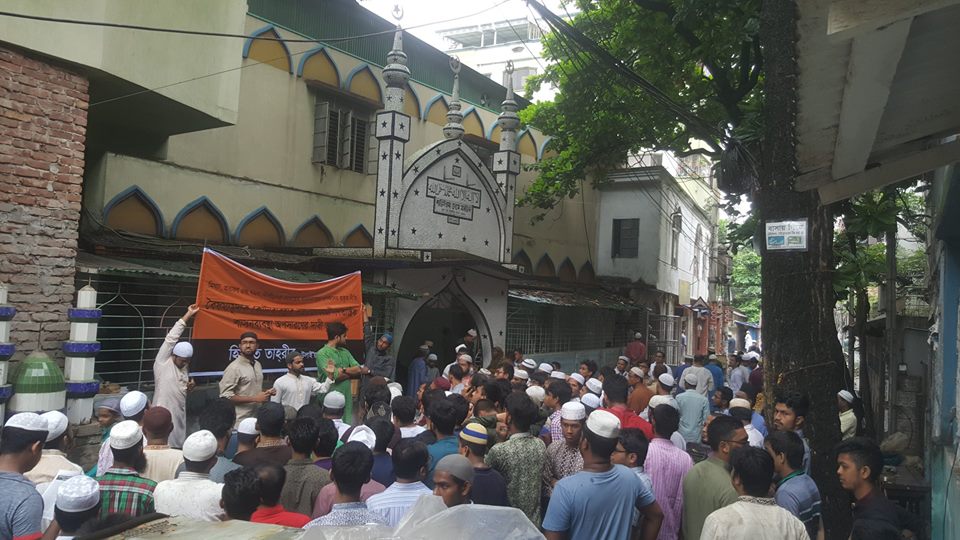 Hizb ut Tahrir / Wilayah Bangladesh organized Jummah Bayan (speech to the people) outside mosques all over Dhaka city and Chittagong, after Jummah Prayers today (27/07/2018), to expose the real face of democracy, a system of lies, deception and persecution, and for the demand of removing this system. While presenting the disgusting ‘Chanakya Niti’ (policy of deception) of Sheikh Hasina’s regime, the speakers said: seeing the surge in popularity quota reform movement being organized by the job seekers and students of different universities and colleges amid severe police violence, the Awami League (AL) government played the appeasement game by falsely promising to accept their demands. After that, the Hasina regime came up with the wicked idea to suppress the movement so that it cannot be re-organized by using its student wing – the Chatra League acting with brutal force, while, the police abducted and arrested all the key organizers of the movement, which they are still continuing. Indeed these types of lies, deception and persecution are the real policy of the rulers under the democratic system, which people have been witnessing for decades under this democratic system. These rulers get into power by making false promises to the people and achieve sovereign authority.

Using this sovereign authority, they serve the vested interest of the Imperialists, a few capitalist elites and themselves, and deprive the greater population from their rights. When the people come to the streets with demand for their rights, these rulers persecute the people with bullets and baton. In the very birthplaces of democracy, i.e. USA, Britain and the European countries, mass protests amongst people and their persecution by the rulers are routine events.

The speaker said, in this democratic system, the rulers use the quota system to set up in the administration a crony group with vested interests, who are used to serve their corrupted political agenda and secure their power. These rulers, who are steeped in corruption and continuously usurp the rights of the people, use this crony group to suppress the rising anger and protests among the people. Like this discriminatory quota system, there are hundreds of other issues which are making our lives miserable. These rulers desire that our demands remain limited to these issues, such as: the anti-VAT movement, the demand for MPO inclusion by teachers, etc. and that we are never able to identify this man-made democratic system as the real problem. These issues are merely symptoms of the main problem, whereas the root of all our sufferings is this democratic system. So, keeping the democratic system in place, and exhausting all our efforts and energy on the numerous issues, including the quota system, will not solve anything. Rather we must put our all efforts to remove this corrupted and repressive democratic system, and join the movement to re-establish the Khilafah (Caliphate), the only system of truth and justice revealed from Allah (swt).

The Khilafah will liberate the nation from the miserable situation they are under this repressive democratic system, and will look after the people’s affairs correctly and implement justice. RasulAllah (saw) said:

“Imam (Khalifah) is guardian and he is responsible for his people.” In the Khilafah, the Khalifah (Caliph) takes the responsibility of the Ummah as an obligation (Fard) on his shoulder. So, he seeks Allah’s (swt) pleasure by taking care of people and at the same time he fears HIS (swt) punishment due to any negligence. In the Khilafah state, the Khalifah does not have the sovereignty of law-making and neither is he above the law. The basis of all laws is the Shariah. Additionally, the Khalifah will be accountable for his duties to the people, the media, the political parties, the representatives of the Ummah (Majlish Al-Ummah) and the Judicial Court regarding ruling (Mahqamat Al-Madhalim). The Khilafah will ensure that all of its citizens can fulfil their basic needs, such as, food, clothing, shelter, medical service and security, and help them achieve a prosperous life. Non-Muslims will have security and enjoy all citizen rights. The Khilafah will bring an end to the spiraling corruption and looting of people’s wealth, and ensure the proper distribution of wealth, and thus put an end to the economic discrimination amongst people.

Mentioning the street movements and protests organized by the people for their just demands, the speakers said that the people have proven that they are not afraid of the anger of the tyrants. So, on behalf of Hizb ut Tahrir, they urged the people not to be confined to protesting for the issue-based demands only, but rather to come forward to join the movement to liberate the country from the AL-BNP regimes, by joining the intellectual and political struggle to re-establish the Khilafah Rashidah (Rightly Guided Caliphate) under the leadership of Hizb ut Tahrir, and to prepare themselves as statesmen. The speakers ended by giving the glad tiding that, insh’Allah, the second Khilafah Rashidah is going to be established very soon, insh’Allah. Allah (swt) says: