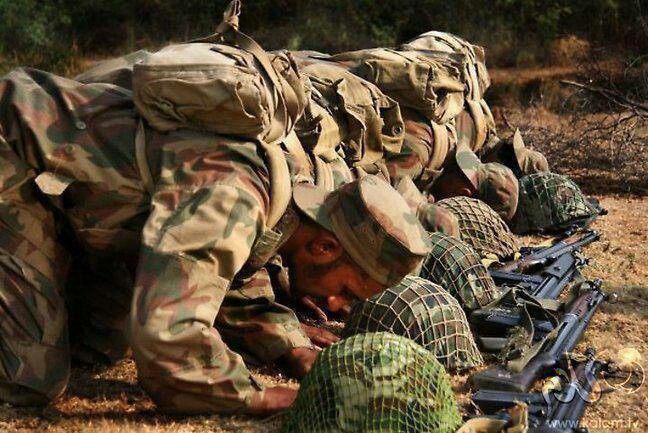 At a time when the enemies of the Muslims have increased in their aggression and the Muslims, from Masjid al-Aqsa and Syria, to Occupied Kashmir and Afghanistan, have increased in noble defiance, every officer of our armed forces must look deep within himself now. He must accept that the obstacle to the revival of the Ummah does not lie outside of himself for he is of the men of Nussrah (Support), power and protection.

He, with others like him, can break the current stalemate, advancing the Ummah from subjugation before her enemies, to dominance over them. So, he must ponder on what has prevented him from moving before and what is holding him back now. In doing so, he must perceive correctly the atmosphere which has been created within the military today in order to prevent movement for change and true independence. He must seek guidance from the Deen so that he does not remain a mere spectator of the clash between the Ummah and the subduing colonialists. Only then can the military officer step forwards as the faithful guardian who secures a resounding victory for the Ummah.

Let the officer consider that the current stifling, retarding atmosphere did not arise by accident. Due to the global dominance of the materialistic ideology of Capitalism, the striving for material wealth has become the primary purpose in life. For lowly material benefit, friendships are made and broken, relations are maintained and cut off, duties are fulfilled and neglected. In the absence of Islam as a way of life, wealth has become the measure of success and status in society. The striving for immense wealth has become a major preoccupation, amongst the influential in general, and the armed forces in particular.

In the case of Pakistan, which possesses the Muslim World’s largest and most powerful armed forces, we see in the golf clubs, exclusive clubs and gymkhanas a culture of rivalry over worldly gains. The discussion is dominated by the comparing of houses, cars, institutions of education for children, extravagant weddings, business investments and the size of savings. In foreign military training, as well as all other forms of foreign contact, the Westerners take care to sense and nurture the materialist tendency within each officer, for this is the key to control. It is thus no surprise that many in the armed forces, particularly at the senior levels, have amassed enough wealth for many lifetimes and this becomes the standard for those junior to them. The Panama Papers and the National Accountability Bureau cases give insight into the massive wealth gathered by the influential and privileged. Whilst this wealth is claimed by some to be ill gotten, and by others, legitimate, none can deny the huge amounts involved and the corrupting atmosphere created as a result.

If we look to better times for our Ummah, the era of Khilafah (Caliphate) and Jihad, we find revealing insight into our current situation. How were we able to taste victory and might over our enemies for centuries then, and not now? Then, the competition within our armed forces was over opening new lands to Islam and embracing martyrdom. The Ummah thus prevailed over her enemies, despite overwhelming numbers and force. The Muslims previously saw wealth merely as a tool, whilst the purpose of life and the measure of success was striving for the dominance of our Deen. Here, let the army officer consider that in the Introduction to the Constitution, as prepared by Hizb ut Tahrir for the coming Khilafah, the military education will have a strong Islamic component.

As Hizb ut Tahrir has adopted in Article 67, “It is obligatory to provide the Army with the highest level of military education and raise its intellectual level as far as possible. Every individual in the Army should be given Islamic culture that enables him to have an awareness of Islam, to at least a general level.” Today, the Muslim officers must reach within themselves, using our Deen as a standard, to overcome the privileges and temptations of their rank, in order to come forwards at the Ummah’s time of great need.

For the men who seek to break the stalemate, let them consider carefully the wisdom in the warnings of RasulAllah (saaw) regarding the unchecked desire for wealth. Ka’b bin ‘Iyad narrated that the RasulAllah (saaw) said:

“Indeed there is a fitnah for every Ummah, and the Fitnah for my Ummah is wealth.” [Tirmidhi]. Ibn Ka’b bin Malik Al-Ansari narrated from his father, that the Messenger of Allah (s.a.w) said,

“Two wolves free among sheep are no more destructive to them than a man’s desire for wealth and honor is to his Deen.” [Tirmidhi].

So how can the one who witnesses the destruction of the Ummah before him and Fitnah upon Fitnah, remain as a passive spectator due to his desire for wealth? If he remains chained by the pursuit of personal wealth, he denies himself the chance to being honored in the Aakhira (Hereafter) forever through supporting our Deen!

Let them consider that the desire for wealth which comes from the nature of man, his instinct of survival, is strong. Indeed, like anything else that we seek to overcome, we cannot underestimate this desire. Nor can we underestimate its ruining effects upon the duties of the servant who seeks to please Allah (swt), as his foremost pursuit in life. Anas b. Malik reported Allah’s Messenger (saaw) as saying:

“If there were two valleys of gold for the son of Adam, he would long for another one. And his mouth will not be filled but with dust, and Allah returns to him who repents.” [Muslim] Moreover, the desire for wealth is strong even in the one who ages and rises to senior ranks in the institution, although death becomes more likely. Anas bin Malik narrated that the Prophet (saw) said,

“The Son of Adam grows old, but two things keep him young: Desire for life and desire for wealth.” [Tirmidhi]

However, Islam, as revealed by the Creator (swt) of both man and wealth, treated this desire in the best manner. If only we were to learn, reflect and reform, we would not be chained to the short worldly life, forsaking our everlasting life in the Aakhira.

He said:«يَقُولُ ابْنُ آدَمَ مَالِي مَالِي» “The son of Adam claims: My wealth, my wealth. And he (saaw) said:

“O son of Adam. is there anything as your belonging except that which you consumed, which you utilized, or which you wore and then it was worn out or you gave as charity and sent it forward?” [Muslim]. In a similar Hadith, Abu Huraira (ra) reported Allah’s Messenger (saaw) as saying:

“A servant says, My wealth. my wealth, but out of his wealth three things are only his: whatever he eats and makes use of or by means of which he dresses himself and it wears out or he gives as charity, and this is what he stored for himself (as a reward for the Hereafter), and what is beyond this (it is of no use to you) because you are to depart and leave it for other people.” [Muslim]. And Anas bin Malik (ra) narrated that the Messenger of Allah (saaw) said,

“Three things follow the deceased person, and two of them return while one remains behind with him. The things which follow him are his family, his wealth and his deeds. His family and his wealth return while his deeds remain.” [Bukhari].

So, let the officers in the senior most ranks consider that were they to die tomorrow, few would say that they died young. Let them ask themselves, what then of the wealth they sought solace and comfort within? Who will such wealth benefit, beyond their inheritors? Such wealth will be of no benefit, as he faces Allah (swt) to be questioned regarding his capability and what he did with it in this era of humiliation. So let him consider when Allah (swt) said,

“The Day when there will not benefit [anyone] wealth or children- But only one who comes to Allah with a sound heart.” [Surah ash-Shura’a 26:88-89]

And let the officer consider that the desire for wealth must never supersede the striving in good deeds at any time, let alone at a time when his good deeds can turn the tide for his beloved Ummah. Allah (swt) said,

“Wealth and children are [but] adornment of the worldly life. But the enduring good deeds are better to your Lord for reward and better for [one’s] hope.” [Surah Al-Kahf 18:46] Ibn ‘Abbas (ra) said,

“This is the celebration of the remembrance of Allah, saying ‘La ilaha illallah, Allahu Akbar, Subhan Allah, Al-Hamdu Lillah, Tabarak Allah, La hawla wa la quwwata illa billah, Astaghfirallah, Sallallahu ‘ala Rasul-Allah’, and fasting, prayer, Hajj, Sadaqah (charity), freeing slaves, Jihad, maintaining ties of kinship, and all other good deeds. These are the righteous good deeds that last, which will remain in Paradise for those who do them for as long as heaven and earth remain.” Allah (swt) also warned,

“And know that your possessions and your children are but a trial and that surely, with Allah is a mighty reward.” [Surah Anfaal 8:28]

“O you who believe! Let not your wealth or your children divert you from the remembrance of Allah. And whosoever does that then they are the losers.” [Surah Munafiqun 63:9]

Let the officer who seeks to walk in the path of the great Ansaar (ra), who granted Nussrah for Islam previously, fix firmly in his heart true success and status is not achieve through wealth. Abu Huraira (ra) reported Allah’s Messenger (saaw) as saying:

“Verily Allah does not look to your faces and your wealth but He looks to your heart and to your deeds.” [Muslim] It was narrated from Samurah bin Jundab that the Messenger of Allah (saaw) said:

Let him purify himself of the corrupting influence and stand as the savior of this Ummah. Let him come forwards now, without hesitation, seeking the status of his brother-in-arms who preceded him in granting Nussrah for Islam as a state and a rule, the honorable Saad ibn Muadh (ra). When Sa’ad (ra) died, his mother wept and RasulAllah (saaw) told her,

“Your tears would recede and your sorrow be lessened if you know that your son is the first person for whom Allah smiled and His Throne trembled.” [At-Tabarani].

So let the army officer of today offer his soul and properties to Allah (swt) for the sake of Jannah in the magnificent trade that is to be envied! Allah (swt) said,

“Indeed, Allah has purchased from the believers their lives and their properties [in exchange] for that they will have Paradise. They fight in the cause of Allah, so they kill and are killed. [It is] a true promise [binding] upon Him in the Torah and the Gospel and the Qur’an. And who is truer to his covenant than Allah? So rejoice in your transaction which you have contracted. And it is that which is the great attainment.” [Surah At-Tawba 9:111]