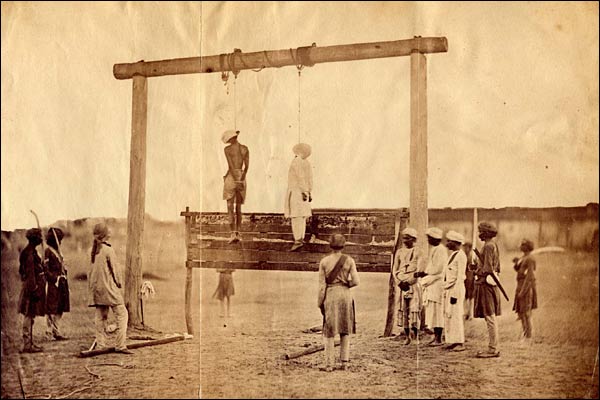 The 1857 Indian Mutiny may have been renamed the Indian War of Independence by post-Independence historians, but neither name acknowledges the roots that it had in religion. Interestingly, historians have always acknowledged the role of religion, which was central, but chose to give it a military name, whether one calls it a mutiny or a war. One of the most significant factors in it is said to have been the issuing of greased cartridges to the native soldiery. The Hindu troops believed that cow grease had been used, and biting off the end papers would defile them and perhaps break their caste; Muslims believed that pig grease had been mixed in, and thus they too would be defiled. Another important factor was that of the evangelical influence among British troops and officers, including those who officered the ‘native’ regiments which included both Hindu and Muslim troops. The evangelicalism created the fear that conversion was sought. As missionaries at the time were setting up schools and hospitals and actively proselytizing, this was not a theoretical fear, as missionaries were at least tolerated, if not encouraged, because the local British administration included evangelicals in its ranks.

The movement that started with a refusal to obey orders quickly ballooned into an attempt to restore the Mughal Dynasty, in the shape of the Emperor Bahadur Shah Zafar. By 1737, when Nadir Shah invaded from Persia and sacked Delhi, the Mughals had lost rule, and Bahadur Shah inherited not the rule over India, but merely over the Red Fort of Delhi. Even there, he had been informed by the British that they would not recognize any of his heirs as the King of Delhi, and ask for the Red Fort to be vacated on his death. The mutinying soldiers, on the other hand, wanted the restoration of his rule.

However, another issue that was being faced by the Muslims was that the name of the Mughal Emperor was recited in the Friday sermons as the ruler. After the Mutiny came to an end, with the sack of Delhi, this time by British troops, and the killing of Bahadur Shah’s sons and his capture, the issue became even more pressing, as the East India Company gave way to the British government. This was not as great a change as it seems, as the Company had acted according to the dictates of the Board of Control for India, which was a government department. However, whereas the Mughal Badishah was named in the Friday sermons throughout India even though he had devolved permission to rule to the Company in exchange for a pension, with the end of the Mughal Dynasty, there was the problem of which name to take. Bahadur Shah himself was alive in exile in Rangoon, but to name him in the khutba would amount to rebellion. The British Viceroy or monarch could not very well be named, because they were not even nominally Muslim. There was a group of ulema who argued that they were ‘ulil amr’ because they allowed the Friday prayer, but even this group did not call for the name of the Queen-Empress to be included in the Friday sermon.

The solution proposed by Shah Abdul Aziz, the son of Shah Waliullah, was adopted. Khatibs all over the Subcontinent began including the name of the Turkish Sultan, who was also the Khalifa, in the Friday sermon, at the time that was Sultan Abdul Majeed. The formula adopted was a generic one, which could apply to any Sultan, and which did not name him. The mention of the Sultan’s name was however not accompanied by the minting of coinage in his name. That was carried out by the Raj.

However, the question of whose name was to be read in the sermons arose after defeat. Before that, there was no question but that the mutinying troops wanted to be led by the Mughal Padishah. The Mutiny may have been caused by several causes, but once the step had been taken, the question of a replacement for company rule became forced on the mutineers. The Mughal Emperor became a default for them. Though 82, Bahadur Shah accepted the allegiance of the mutineers. The harsh reality was that Bahadur Shah could only rebel because he had an Army at last, and the Raj could not continue without defeating his Army, which was not done only by using British troops, but also native troops, including some specially raised units.

At the time, there were many individual grievances, which coalesced because they seemed to have one solution: the expulsion of the British, and the restoration of the Mughal Empire. It should not be forgotten that this was not just a Muslim demand, but also a Hindu one. Hindu grievances included that of Jhansi, where the Rani led the state into battle because the adoption of the heir was not acknowledged when the Raja died in 1854, as well as that of Nana Sahib, the adopted heir of the Peshwa, whom the British also did not acknowledge when his adoptive father, Baji Rao II, died in 1851.

There was then a British policy of resuming princely states if there was no natural heir. There was also the example of Oudh, whose Nawab, Wajid Ali Shah, was deposed in 1856, and the state absorbed into the Calcutta Presidency. It was clubbed together with the province of Agra, into the United Province (UP) of Agra and Oudh.

The Mutiny presents a more complex picture than is imagined, but one of the features that emerge is that all Indians felt they would get a better deal from the Mughals than from the British. It is noticeable that the Nana Sahib and the Rani of Jhansi were both Marhattas. Under Shivaji, the Marhattas had engaged in a struggle against Aurangzeb that occupied him to the end of his 48-year reign. Wajid Ali Shah was the last King of Oudh, a title the British had encouraged the Nawabs to adopt to rival the ‘King of Delhi’, the title the British gave to the Mughal Emperor. It was not just Hindus who looked to the Mughals for a better deal, but those Hindus as well who had aspired to replace them.

It needs mention here that even in the time of Akbar and his Din Ilahi, the law implemented by the Mughals was the Sharia. This was the law that Bahadur Shah Zafar was going to implement, so even Hindu potential subjects would have been well aware of what legal system would be enforced if the British were replaced.

It is worth noting that the Mughals are not accounted particularly devout Muslims, apart from Aurangzeb. However, even at the peak of the Din Ilahi, the Mughals made the Sharia the law of the land. There was no reversion to the Hindu law, which was restricted to personal law (marriage, inheritance, and related matters). Thus, it appears, Hindus looked to Muslims to rule with greater justice than the British.

The lessons of 1857 cannot be ignored even though this is its 160th anniversary year. Even now, India is the scene of oppression and suffering, even though it won independence from the British 70 years ago. Is the reason the fact that the post-Independence governments in both India and Pakistan tried to continue the British systems, whether governing, legal, educational or economic? Only the implementation of Islamic law, under a Khalifah committed to rule by Islam, can solve the problems of the Indian subcontinent. In 70 years, India has been the stage where attempts have been made to establish a Hindu state. It has had to call itself a secular state, because of its religious minorities, but the result has been religious oppression. India still has only the Mughal years, of the rule of Islamic law, to look to as an example where both the masses and the elite looked to the government to solve their problems.

It must therefore be realized that the resumption of Islamic rule does not mean some sort of Muslim triumphalism, but a resolution of the problems of all citizens, irrespective of their religion. And nowhere does that apply as strongly as the Indian subcontinent, as the events of 1857 still indicate, to this day.

“Indeed, We have revealed upon you a Book in Truth, to rule between the people by what Allah has shown you.”