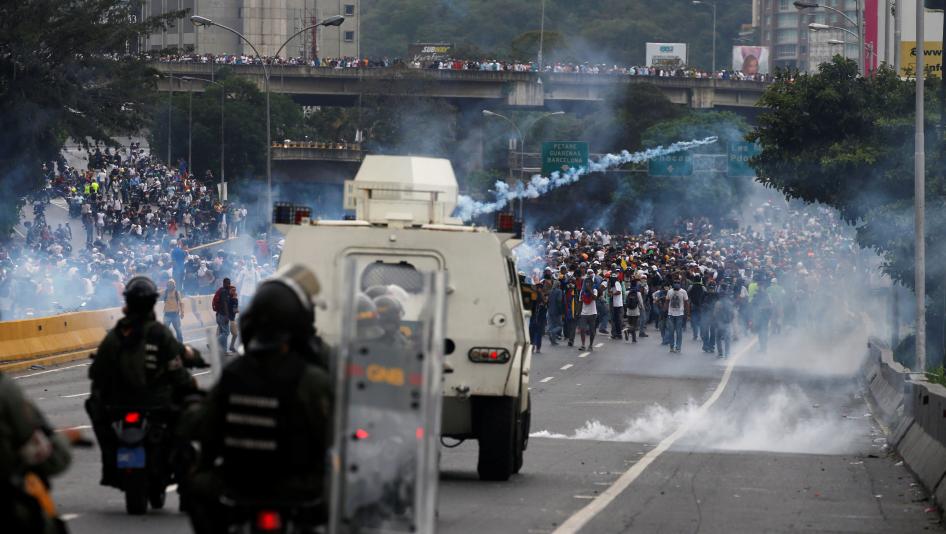 Venezuela, the country with the largest oil reserves in the world, is on the verge of collapse as its economic and political crisis has deteriorated to the point that many government offices open for only two days a week to save electricity. Food shortages are causing lengthy ques for basic necessities. The healthcare system has collapsed and inflation is now officially over 1000%.

Tension has spread to the streets of Venezuela as both government and opposition accuse each other of trying to stage a coup d’état. Anti-government protests have swept the nation and many have been killed or injured in protest-related violence. Venezuela’s political landscape has been shaped primarily by Chavistas; a label granted to followers of the late President Hugo Chavez. After his death in 2013, newly elected President, Nicholas Maduro, perpetuated Chavism only to invite harsh criticism from the opposition. As Muslims, there are many lessons we can learn from what is taking place in Venezuela.

Economic Dependency on a Single Commodity

Maduro has poorly managed Venezuela, but that is not to say his predecessors did any difference. It is certainly clear that there are many systemic issues within the country that neither Chavism nor the opposition is able to resolve. One of the most pressing problems is the extreme dependency on oil which accounts for a shocking 50% of GDP and 95% of Venezuela’s export revenues. In fact, most of these revenues were used to fund generous social programmes which provided homes for more than a million Venezuelans. Although very profitable, the fiscal attitude towards oil was extremely myopic, particularly as government failed to use their surplus in the short run to substitute oil for a more sustainable source of revenue. Indeed, the recent oil crisis, which forced oil prices to $26 a barrel, created a major problem for the Venezuelan economy. As a major exporter of oil, its budget saw a massive deficit which naturally led to austerity and chaos. Venezuela dependency on oil means it needs oil prices if over $120 a barrel for its national budget to breakeven. It is very clear that Maduro was chasing short run growth with no consideration for long run stability; such is the nature of capitalism. From this, we learn that in order to avoid a similar crisis, it is vital for the Muslim world and the future Khilafah to ensure that its economy is not pegged to an extremely volatile commodity (oil) that has very limited sustainability in the long run. In doing so, the Khilafah would not have to deal with the damaging instability that is a result of fluctuating commodity prices.

The great dependency on oil revenues meant that Venezuela’s economy is import-driven and certainly not self-sufficient. This is particularly concerning as it has stripped power from Venezuela and made it heavily dependent on goods/services. Without this domestic production, the Venezuelan economy is vulnerable to the whims and desires of those who sustain it. This indicates, once again, a lack of long term strategic planning. Such myopia has left Venezuela worse off, both economically and politically. The future Khilafah (Caliphate) would need to ensure that it does not rely purely on external imports in order to sustain its economy, primarily by developing industries in which it is skilled at. It would also need to think long term by making use of what it might be heavily dependent on in the short run (such as oil in Venezuela’s case) in order to shift towards something more sustainable in the long run.

Whilst the divisions between Chavistas and those who oppose them have existed for many years, the recent tension can also be attributed to a surprise announcement by the Supreme Court on 29th March 2017 which stripped the powers of the opposition-controlled National Assembly. This led to public outrage; seen as an attempt by Nicholas Maduro to silence the opposition and retain his power. Indeed, the problem here lies on two sides: The corruption of the ruler (which is known to be endemic) and the inability for his people to account him. Together these problems create the most dangerous anarchy. In order to resolve them both, the Khilafah would stimulate the right ideas and deterrents. In regards to the former, the ruler holds great responsibility to correctly manage the affairs of his people and he is accountable not only to them but to the Almighty. Likewise, the people hold great responsibility to account their ruler, but also to listen to him when they must. In regards to the latter, the Khilafah would implement institutions to ensure that the Khalifa is accounted appropriately (Mahkamat ul-Madhalim) and that the people can voice their concerns (Majlis ul-Ummah). In doing so, it would avoid the political instability seen on the streets of Venezuela.

The problem, however, must not be seen to be simply institutional or one of policy failure for that matter. The Venezuelan crisis is but a manifestation of the ideology that governs it. From the faltering market, to the deteriorating social democracy, it is clear that the poor systems, born from the ideas of secularism, are taking their toll on Venezuela. Indeed, the only solution for the people is to adopt an ideology that is able to solve their problems in a just and comprehensive manner. The lessons, highlighted from the problems we have seen, are lessons not only for the Muslims but also for the Venezuelan people, so that they may realign their call towards a proper solution, as opposed to engaging in recidivism with the current system that poorly governs them.