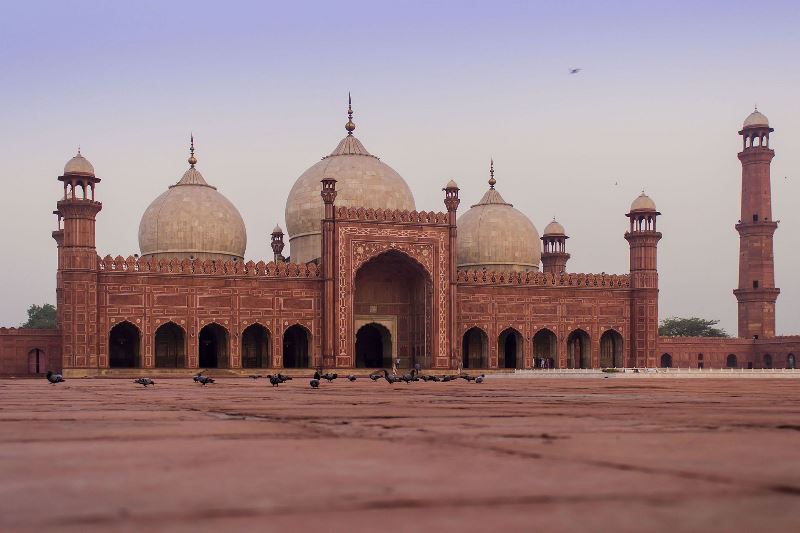 In 711, Muslim traders sailed across the Indian Ocean from Ceylon near the coast of Sindh, but their ship was looted and they were taken prisoners. The news reached the capital of the Khilafah, when the Khalifah was Alwaleed bin Abd al-Malik. He sent a letter to Hajjaj bin Yusuf, the governor of Iraq, requesting him to ask the rulers of Sindh to apologise for this act and mobilize to liberate the captured Muslims. Thus, Hajjaj sent an army under the leadership of one of the Ummah’s brightest sons. His name occupies a prominent place in the hearts of Muslims, especially those of the Indian Subcontinent. He took responsibility for leading the army of the Islamic Khilafah to a foreign land. He was Muhammad bin Qasim al-Thaqafi.

This was how the reply of the Muslim leader was and how he weighed up matters. The Khalifah Abd al-Malik did not merely lodge protests with the Romans or the British against what sinful hands had done against the Muslims. Indeed, there is a stark contrast between the stance of the Khalifah Abd al-Malik and the stance of the current rulers of Pakistan. When Muslim sanctities within Pakistan and outside Pakistan are violated by the new occupiers, the Americans, and the perpetual enemy, the Hindu state, these rulers instead resort to the UN Security Council, the European Union and America, which are in fact the rogue global actors that nurture every such attack. These actors have proved a thousand times that they are nothing but oppressors of Islam and Muslims. They lie to the Muslims at night and devour them in the morning. They are all one family and there is no difference between the European Union, the Security Council, America and Russia. Allah (swt) said, وَالَّذِينَ كَفَرُوا بَعْضُهُمْ أَوْلِيَآءُ بَعْضٍ إِلاَّ تَفْعَلُوهُ تَكُن فِتْنَةٌ فِي الاَرْضِ وَفَسَادٌ كَبِيرٌ “And those who disbelieved are allies of one another. If you do not do so, there will be fitnah on earth and great corruption.” [Surah al-Anfaal 8:73]

The true military or political leader, holding the Islamic Belief, does not accept negotiations and compromise over the rights of Muslims. When the army of the Khilafah arrived in Debal, near Karachi, Muhammad bin Qasim handed over his demands to the ruler, Raja Dahir, who in turn rejected them. Thus the Muslims fought against him, until they defeated him and opened Debal to Islam. Muhammad bin Qasim succeeded his first success with other conquests. The duty of the Muslims is to make the Word of Allah (swt) the highest and so on the basis of the Islamic Belief, the Islamic Army continued its progress until it reached Multan. In three years, i.e. by 714 CE, the entirety of Sindh and southern Punjab were opened to the rule of the Islamic Khilafah. The opening of these lands was not a hostility upon others, condemned by the international community or any fair-minded person. With the opening of the north-western part of the Indian Subcontinent, the Islamic Army brought idol-worshippers from darkness to the light of Islam. Muhammad bin Qasim asked the administrative employees of the Khalifah to take care of the affairs of the people with the honesty and justice of Islam. They took the money from Zakat and Jizyah without overburdening and provided a decent living for the people.

In our time, the return of the dominance of Islam over the Indian Subcontinent will not be unjust and forced. It will be through the removal of the darkness of greedy capitalism that has impoverished and humiliated its people. And it will be through the restoration of the light and justice of Islam, where all people can benefit of their wealth and take it back from a handful of usurping, corrupt capitalists and feudal rulers.

This solution which we are working to establish on the ground, under the shade of the coming Khilafah State, soon insha’Allah, is like that in the time of the Moghul state, which ruled by Islam. This was even though the Moghul state was far from the centre of the Abbasid Caliphate in Baghdad. Babur, who came from Central Asia to Delhi in 1526, was the first Moghul ruler. His son, Humayun, took power after his death, 1530-1556. According to a document available in the government library in Bhopal, Babur left the following bequest to Humayun, who despite his shortcomings, cared about the application of Islam in a fair manner. And the bequest states, “Observe my son, I advise you to do the following: to establish justice and to observe the religious sensitivities and rituals of the people, even the cows that are worshiped by some citizens, do not slaughter them with provocation and defiance, but slay them in private places. This brings you closer to your citizens, even those who are in charge of them. Do not demolish or destroy the places of worship of any belief, and establish justice in its entirety until peace is ensured in the lands. Islam can be better communicated through the sword of love and affection rather than the sword of oppression and persecution. Avoid disputes between Shia and Sunnis. Look at the different qualities of your people completely as if they were the characteristics of the seasons of the year.”

The fall of the lands of the Subcontinent was the result of the continuing malicious plots by the colonialists, and also because of the distancing of the Subcontinent from the centre of the Khilafah and its then capital in Istanbul. This was in addition to the weakness that had begun to prevail over the Muslims in general. Thus, the Kuffar saw an opportunity to seize control of the Indian Subcontinent. The British invasion of the Indian Subcontinent took place in 1757, where they were strongly resisted by Muslims. The war continued alternating in favor of victory for the Islamic rule in the Indian subcontinent, to the aggressor Britain with the help of some Kuffar forces of Hindus, Sikhs, Buddhist amongst others. Britain was unable to achieve control and stability of its dominance except only after many decades of fierce wars with the Muslims.

Colonialism has never ceased to occupy the lands ever since, either through direct military colonization at times, or through governments and military leaders who are agents for the colonialists at other times, achieving for them that which they themselves could achieve even by direct military occupation. Thus, the Jaahiliyah ignorance returned to these lands, through ruling by other than all that Allah (swt) had revealed, and the rule by International Law as well as British law, and then American law, prevailed.

There is a difference between the behaviour of the Muslims of these lands when the Sultan was their authority and the behaviour of the rulers these days. During the period of the British invasion and the weakness of the Mughal rule over various parts of India, some rulers began to seek support and legitimacy from the Khalifah in Istanbul. They did not seek support from the kuffar, as the rulers do today, when they turn to the European Union or the United Nations every time we are attacked. For example, the ruler of Kannur (Cannanore) sent a diplomatic message to Sultan Abdul Hamid I in 1779, “I implore the Khaleefah for protection from the aggression of the English East India Company.” We also saw how Tippu Sultan, the governor of Mysore, asked the Khalifah to recognize his rule, but the Khilafah was not at the center of power at the time, so it was not able to send armies to the Indian Subcontinent. However the Khalifah sent a message acknowledging Tippu as the governor of Mysore. Thus, Tippu did not send his credentials to a Kaafir ruler such as President Trump, who stalks us in circles! In the words of the poet:

“Indeed I remember and reflect on the written memory, a glorious memory achieved at our hands,

But when I turned to Islam in the land today, you will find is as a bird with its wings clipped,

How many hand-spans have we given away and how we have been ruled by the people of oppression,

Yet, previously, the people welcomed Islam when they saw it, when brotherhood and justice had real meaning,

O the one who saw Umar (ra), his coldness was removed by him, just as the hot oil warms,

The Persian Chosroes shook in his chair, whilst the Roman Caesars feared him,

The West sought guidance by the past and was guided, whilst we had left our past forgotten,

We walk behind the West, adopting from its light, whilst struck by its shrapnel.”

Indeed the good, light and justice that came through the Muslim army led by the Muhammad bin Qasim, the Opener, can be restored to at least as much as it was. This is only if a military commander from amongst the military commanders of the Pakistan Army, with a sense of honour and lofty principles, eradicates colonialism by overthrowing its agents and replaces them with a ruler, who is like Khalifah Abdul Malik bin Marwan, or Khalifah Umar al-Farooq, by establishing the second Khilafah (Caliphate) on the Method of Prophethood.

This is how we will restore the glory that we have lost, which our rulers still refuse to restore, otherwise we will never restore our rightful position. Are the wombs sterile of the birth of such an awaited commander, or are there many, but they are in need of someone to ring a bell?! We are confident that the descendants of Mohammed bin Qasim are many in Pakistan, and that this matter is just a matter of time. And it is a matter for those who are foremost in goodness, for such will be the foremost in Jannah and achieve honour in the Dunyah. Allah (swt) said, سَابِقُوا إِلَى مَغْفِرَةٍ مِنْ رَبِّكُمْ وَجَنَّةٍ عَرْضُهَا كَعَرْضِ السَّمَاءِ وَالْأَرْضِ أُعِدَّتْ لِلَّذِينَ آمَنُوا بِاللَّهِ وَرُسُلِهِ ذَلِكَ فَضْلُ اللَّهِ يُؤْتِيهِ مَنْ يَشَاءُ وَاللَّهُ ذُو الْفَضْلِ الْعَظِيمِ “Be foremost in seeking forgiveness from your Lord and a Garden whose width is like the width of the heavens and earth, prepared for those who believed in Allah and His messengers. That is the bounty of Allah which He gives to whom He wills, and Allah is the possessor of great bounty.” [Surah al-Hadeed 57:21]