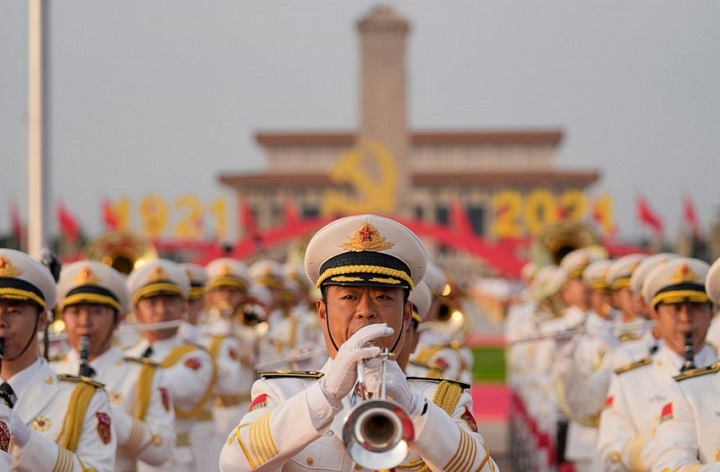 It is difficult for a day to go by without China making the news, whether it is its GDP, aircraft carriers, artificial intelligence, its dams, bullet trains or megacities. There is no denying that China grabs a lot of headlines. On 1 July 2021, China’s sole political party – the Chinese Communist Party (CCP) celebrated its centenary. There are very few parties in the world which can say they have been around for a hundred years, but the CCP is going out of its way to show its own people that its stewardship of China makes it the only legitimate leader of the country. To the rest of the world, China is trying to show that it is an emerging power to be respected. China has gone from a poverty-stricken nation just four decades ago to an industrial monster that manufactures most of the world’s goods. As China represents an example of a nation that has developed in our lifetime, what lessons can the Muslim world learn from China’s journey, and does it represent a model we should follow?

The People’s Republic of China (PRC) was established by the Communists who were led by Mao Zedong in 1948. China’s history up to this point was very similar to the Muslim world today. China had been going through a century of humiliation from 1839 when Britain first turned up to its shores in order to get trading privileges which then turned into colonising China’s ports. This was how Britain ruled over Hong Kong until 1997. After Britain arrived, France, the US, Russia, Belgium and Holland all began taking parts of China, much like the Muslim world experienced during the 18th and 19th centuries. Following World War 2 (WW2), things changed. The Chinese saw themselves as a historic world-power whose potential was being held back by Western colonialism. The humiliation had to end! The only way forward was to kick out the colonialists, remove foreign interference and ensure the Chinese ran China. This is what Mao and the Communists did, realising there was no independence by aligning or working with any colonial power.

The Muslim world has similarly been going through a century of humiliation. Amongst the Muslim rulers, the colonialists found opportunists and lackeys who would do anything to gain their thrones. Their colonial masters continue to humiliate them, but they bend over backwards to protect their masters’ interests thinking this will preserve their rule. As a result, and unlike China today, the Muslim world is a hotbed of foreign intrigue because the Muslims rulers are the door through which the colonial nations enter our lands.

When the CCP took the reins, they inherited a nation that was well behind the other world powers. They lacked modern industry and struggled to even feed their own population. Mao and his comrades understood they needed to change this and set about the long-term development of China. Keep in mind that China at the time had the world’s largest population.

The CCP attempted to develop China under communist economic principles, and this turned out to be a huge disaster. When Mao Zedong passed away in 1975, China remained a poor nation; its hopes of industrialisation still eluded it, and its people still couldn’t feed themselves. The CCP realised communism was a failure and abandoned it, and also abandoned propagating it around the world. The new leadership of the CCP led by Deng Xiaoping concluded China lacked the skills, technology and know-how to compete with the world’s most influential nations.

The CCP technocrats came up with a plan to make China the cheapest location for foreign companies to manufacture their goods. As China had the world’s largest population, it had an endless supply of labour. The country went on a huge programme of infrastructure development to entice foreign companies to transfer their manufacturing to China. This infrastructure connected the vast country with roads, tracks and ports, and it provided the power plants and telecommunication network to get the new industrial China working efficiently and open for global business. In 1979 China had a mere 33,000 miles of rail; by 2016 this exceeded 100,000 miles – the longest high speed rail network in the world. Over 80% of China’s population lived in rural areas in 1979. Today only 50% live in rural China. The CCP created towns and cities for hundreds of millions of its citizens in the space of just a few decades.

But the CCP didn’t want China to become a mere factory for the West. It wanted to use foreign technology, skills and expertise to become self-sufficient in the long term. China created Special Economic Zones (SEZ) with a variety of tax benefits for foreign companies to move their manufacturing to China and take advantage of cheap labour. Those that brought advanced and new technologies received huge preferential treatment, including virtually zero rates of tax. This strategy allowed China to challenge the West in areas such as artificial intelligence and other advanced computing development. China therefore worked on a long-term plan of building infrastructure which is the path nations such as Japan and Germany, and it also undertook and ensured that ‘tech and skills’ were transferred to the country which they are today using to become self-sufficient and innovative.

Despite possessing some of the world’s key resources in abundance, no such long-term strategy exists in the Muslim world, but rather short-term economic projects have been pursued or foreign-born strategies implemented under the guise of free markets and free trade. The Middle East nations, who have abundant energy resources, have never used this to build state of the art infrastructure (beyond malls and hotels of course) or to acquire modern technologies. Saudi Arabia could buy the technology and the skills know-how and spend a single generation ensuring these were learnt and adopted by its domestic population, but the Saud family is more concerned with maintaining its throne and investing the Ummah’s wealth in Western financial markets and bailing out Western corporations.

Whilst there are notes to be taken from China’s route to development, there are also a number of lessons we can learn that show the limitations of China’s development and things we should steer clear of.

Reform in China was driven by pragmatism and undertaken slowly to manage change. China today has an economy with many elements of capitalism, but the CCP adopts what works for the country rather than looking to be an ideological country. China’s political system has only one political party – the CCP. China uses nationalism and history to unite the country and in its foreign policy China doesn’t advocate any values; it just wants economic deals, investment and markets. This lack of an ideology has created a number of problems for China.

Hong Kong and Taiwan are two territories that China looks upon as rebels, but after decades of trying, it has failed to integrate them into mainland values. Hong Kong was colonised by Britain for 150 years up to 1997 and during this period, Britain established Western institutions and values. When British left, the six million people of this island did not and do not see themselves as Han Chinese but rather as Hong Kongers. Despite ruling over Hong Kong now for nearly 25 years, China is not any closer to winning over the people of Hong Kong, who challenge Beijing openly now and see themselves as Western rather than Han Chinese. China faces a similar problem in Taiwan where it has failed to win the people over, despite pouring money, investment and creating jobs for the rebel island. All of this is because China has no ideology nor values for such people to embrace in unity with the mainland. China has embraced bits of Communism and bits of Capitalism; and nationalism which has not helped to reunite either territory. Taiwan and Hong Kong’s economic situation will not allow China to win the people over. A lack of unifying values has resulted in a very heavy-handed approach to maintaining rule over the 25 million Muslims of Xinjiang. China has found that economics, infrastructure and technology will not win the day here.

This lack of ideology has resulted in a number of emerging problems China is struggling to solve. The increase in wealth has led to China’s GDP growing 86-fold since 1979. Statistically speaking China has ended poverty – virtually none of its population lives on less than $1.90 a day. But most of China’s population lives on less than $5 a day which is as good as being in poverty. Whilst it has more wealth, China’s lack of ideology means it has not been able to distribute this wealth in any equitable manner.

The development of China has also caused serious social issues. The Chinese Academy of Social Sciences estimated the number of annual mass incidents exceeds 180,000. Much of the world hears little of what takes place in China due to the strict control the CCP places on its outreach to the world. China has for centuries attempted to hold together a vast multi-cultural and multi-ethnic nation despite periods of political centralisation and fragmentation. But cultural and linguistic differences have worsened due to uneven growth and a massive maldistribution of wealth. Physical mistreatment, imprisonment, lax labour laws and pitiful pay and the fact that the Chinese government is seen not to have addressed the economic needs of the vast bulk of the population are all causing internal cohesion issues. China’s economy has been built upon over a billion workers serving 200 million Communist Party cadres. These workers receive less pay than workers in Africa and Mexico and were the real fuel of China’s economic miracle. These workers have been the ones that keep China’s factories running for 24 hours a day. The CCP has a real problem balancing economic growth with social wellbeing and this in the long-run could lead to instability.

A Ministry of Education report in 2018 confirmed more than 13,600 primary schools closed nationwide from 2012. The ministry looked to China’s dramatically shifting demographic profile to explain the widespread closures. It also confirmed that between 2002 and 2012, the number of students enrolled in primary schools dropped by nearly 20%. The One Child Policy that China for long pursued has created a huge imbalance in its population as its workforce begins to shrink when the CCP needs the workforce to carry China’s manufacturing and keep the economy growing. The change in child policy witnessed recently is aimed at reversing this trend.

The lack of ideology has also meant China has little to offer the rest of the world beyond a cheap manufacturing base. When the liberal order is struggling for survival. While the Western dominance of the world is in decline, China should be offering an alternative but its lack of ideology means it is empty-handed. Even Chinese culture is not universal; it is unique to the Chinese people.

These challenges China faces are no different to many of the issues present in the Muslim world. A lack of ideology means China is unable to deal consistently with problems and is unable to solve problems without creating more problems elsewhere. Whilst China may gain lots of global media coverage, it represents little that can be replicated. China’s development was unique to its particular reality, and resulted in economic development at the expense of wealth distribution and in the creation of local conditions which would be unacceptable to most people. The Muslim Ummah possesses Islam that not only unites people but it provides a framework to run an economy and also a framework to organise society, and amalgamates different people. What we can learn from China is there is no future in adopting Western ideals or integrating into the global system constructed by the West. However, removing foreign influence and being independent is where the Muslim world needs to look.