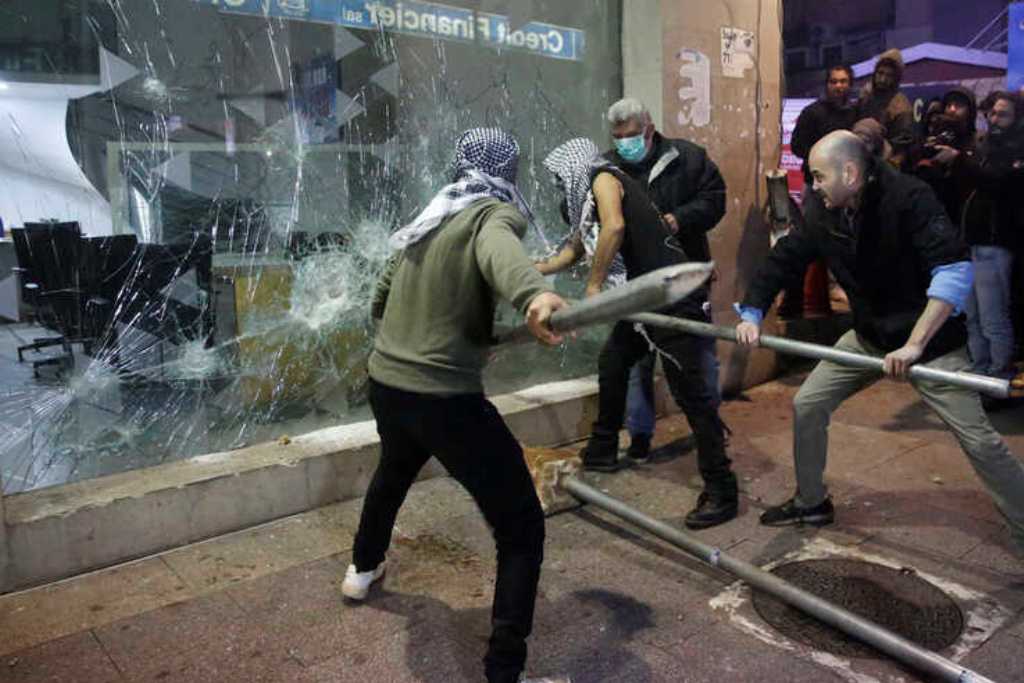 The current economic crisis in Lebanon has exposed the venality of the despicable politicians, hyperinflationary prices, and rampant foreign imperial exploitation. Besides the clear exposure of the current system, foreign powers and their surrogates are trying their level best to lead the country towards the same political and economic reforms, which destroyed the country in the first instance. It is important to examine how Lebanon got itself into this crisis and what Lebanon is required to do to address its prevailing condition once and for all.

Lebanon’s banking infrastructure is built upon unfettered foreign investments to attract a flow of US dollars into the country; these are then used for trading on the international market. There are several ways that Lebanon achieves this. Either through borrowing money from the International Monetary Fund (IMF), attracting foreign dollar investments or remittances to Lebanese banks from its indigenous expat communities. Lebanon also secures US dollars through its exports; however, the country’s imports significantly outstrip its exports. With a weak developing nation such as Lebanon the excessive amounts of imports generate a trade deficit impacting job creation and economic growth. After the Lebanon War in 2006, the country began to borrow large sums of US dollars from the IMF to import essential materials for reconstruction to help rebuild the country. Incidentally, during this very period which followed the 2008 Economic Crisis the US dollar was weak and interest rates were slashed to make borrowing attractive.

Since Lebanon has no real industry and very few export goods (gems and precious metals are amongst its biggest exports). The peg currency model in which a national government sets a specific fixed exchange rate for its currency with a foreign currency or a basket of currencies, creates many obstacles. This is because when a currency is pegged to the U.S dollar it devalues and appreciates relative to the US dollar. However, when the currency falls below the pegged rate the country needs to have enough US Treasury Bonds to sell to appreciate the value of its local currency to restore its peg value. This happens by a country’s central bank (Banque du Liban) selling U.S Treasury Bonds, which causes the value of the U.S dollar to depreciate. Once the Central Bank receives the dollars through selling U.S Treasury Bonds then the country’s central bank starts to purchase local currency to increase its value. This method becomes a problem since the country that needs to keep restoring the peg requires a lot of dollars, which is normally earned through exports. Lebanon, on the other hand, does not have enough dollars as it disproportionately imports more than it exports. Therefore, it becomes difficult for Lebanon to maintain its peg with the dollar. Notwithstanding, the dollar’s value fluctuates constantly due to its role as a world reserve currency.

Due to the shortage of dollars, the country needed to have enough of local currency available to continue the purchasing of the U.S dollars, which the country urgently requires for imports. Lebanon’s Central Bank began to print local currency in excessive amounts to buy U.S dollars since the value of the Lebanese Pound was significantly weaker in comparison to the dollar. As a result, the persistent printing of the local currency eventually led to hyperinflation. Currently, the general population cannot even procure fuel at gas stations as the Lebanese Pound devalued so rapidly that domestic purchases have become too expensive. Thus, the public began rushing to buy greenback since it has the purchasing power to buy domestic goods for consumption. Queues quickly formed outside numerous currency exchange kiosks around the country to buy US dollars with little success as the dollars are short supply.

With respect to the foreign loans, borrowed from the IMF which leave Lebanon parched of dollars since the money borrowed is burnt up in construction, tourism, and real estate. Therefore, to pay back the IMF with compound interest becomes a huge issue as it will never be able to pay back the principle amount of the loan – nothing more than a debt trap which limits future earnings. Furthermore, due to the lack of any significant exports, Lebanon cannot generate enough US dollars to pay back the loans to the IMF or store it within its reserves for future international transactions. Thus, Lebanon is forced to go back to the IMF for more loans, which come with strings attached known as structural adjustments. The situation has caused a lot of anger and frustration amongst the Lebanese people since the country has focused more on paying its foreign creditors, which has resulted in neglecting the much needed cash injection on public spending, such as the electricity sector, which has come under a lot of pressure in the recent years due to the influx of Syrian migrants entering the country.

Regarding foreign deposits, banks in Lebanon have commenced lending their foreign dollar deposits to the Lebanese Central Bank in return for high interest returns. But the issue remains, as there are not enough US dollars to pay back the commercial banks in Lebanon, or the foreign creditors or for import purchases. The Central Bank cannot sustain the printing of money to purchase enough U.S dollars to pay back the commercial bank in the country. Thus, brick by brick and dollar by dollar, different entities within Lebanon the central bank, the commercial banks and the private and public sector are falling apart due to the shortage of dollars and a circles of debt, which ultimately is indebted to America.

Lebanon’s Central Bank governor Riad Toufic Salamé, bizarrely insists on maintaining the dollar peg and strongly discouraged the Lebanese Pound from permanently moving away from the dollar peg model. The truth of the matter is that either Lebanon retains its peg to dollar model or departs from it is irrelevant – the country’s economic woes will continue to persist since the country will always approach foreign imperialists for its economic management and adjustments. And the reason Riad Salamé insists on maintaining the peg to dollar model is because he is America’s economic “hitman”. In the past, Salamé worked for US wealth management company Merrill Lynch before becoming the governor of Lebanon’s central bank (Banque du Liban), and he is also coincidently one of the members of the board of governors within the IMF. Thus, it is hardly surprising to why his macroeconomic policies coincide with US interests.

The situation started to deteriorate even further when U.S sanctions started to be applied to Lebanese banks who are presumably affiliated with Hezbollah. These sanctions are part of the U.S Maximum Pressure Campaign, which came into effect after Trump’s arrival to office. Heavy U.S sanctions also began to catalyse the effects of the pre-existing dire economic conditions of the Lebanese economy because foreign investors started to lose confidence to invest in Lebanese banks making it substantially tough for the country to gain enough U.S dollars for imports. This led to many families not being able to meet its basic human needs because Lebanon imports roughly 85 per cent of its food and other consumable goods from foreign suppliers. COVID-19 further accelerated the demise of Lebanon’s socio-economic system to a whole new level. The government lockdown resulted an abrupt slowdown in the much-needed circulation of money within the economy destroying the confidence of the domestic consumers.

Besides, the hoarding of wealth by Lebanon’s super-rich elites including its corrupt politicians who have pilfered cash injections from a plethora of loans and foreign deposits in domestic banks. The hypocrisy from the Western powers has clearly been exposed when they recently demanded transparency regarding the government’s activities and structural reforms. The truth is that a vast majority of the government remains under America’s control and the remaining under French sphere of influence. The reality is, that America’s imperial institutions namely the IMF and the World Bank, have directly contributed to the financial status of the wealthy and corrupt elite at the top of Lebanon’s rich list by bolstering the power of the corrupt elite politicians which America then utilises to safeguard her interests. All of this whilst the rest of the country continues to suffer. Besides increasing the power of the corrupt politicians and other influential entities such as the likes Riad Toufic Salamé, America has restrained them by making the country suffer through economic hardships, which benefits the U.S by maintaining its control not only over the country but also upon the subordinate politicians whose wealth and power remains under American hands. When the U.S imposed its sanctions on Lebanese banks who are presumed to be affiliated with Hezbollah, the Lebanese Canadian Bank and the Lebanon’s Jammal Trust Bank, it received zero protests from the Lebanese government officials, which demonstrates the amount of control and influence the U.S possesses over Lebanon where the U.S can do whatever it desires without any real resistance towards its interests. Invoking the need for transparency falls short since the U.S designs are the very cause for the corrupt system that exists in Lebanon today.

The only solution for Lebanon’s crisis is the establishment of the Khilafah state (Caliphate), which would eliminate the Western surrogates and the imperial designs from Lebanon and unite it with the neighbouring Muslim lands. If Lebanon becomes reunified back into Syria and consequently, Syria annexes with Egypt then the Zionist entity would not be able to last more than a week. By becoming a single indivisible entity, the lands of Ash-Sham would be able to synergise their resources, which would expunge their dependence upon foreign powers unlike the current nation-state system divides the Muslim lands today. Allah (swt) reminds us in Surah Anfal: وَأَعِدُّوا لَهُم مَّا اسْتَطَعْتُم مِّن قُوَّةٍ وَمِن رِّبَاطِ الْخَيْلِ تُرْهِبُونَ بِهِ عَدُوَّ اللَّهِ وَعَدُوَّكُمْ وَآخَرِينَ مِن دُونِهِمْ لَا تَعْلَمُونَهُمُ اللَّهُ يَعْلَمُهُمْ وَمَا تُنفِقُوا مِن شَيْءٍ فِي سَبِيلِ اللَّهِ يُوَفَّ إِلَيْكُمْ وَأَنتُمْ لَا تُظْلَمُونَ “And prepare against them whatever you are able of power and of steeds of war by which you may terrify the enemy of Allah and your enemy and others besides them whom you do not know [but] whom Allah knows. And whatever you spend in the cause of Allah will be fully repaid to you, and you will not be wronged.” [Anfal:60]

Simultaneously, the establishment of Khilafah would replace fiat currency with gold and silver standard, preventing instability and maintaining the currency’s intrinsic value.

The Khilafah would also establish private, public, and state property. Such regulation of properties under the Khilafah state would prevent mere excessive privatisation of several lands and abundant resources. Instead, the State would manage the different types of properties so the wealth could constantly be distributed across the Islamic lands rather than it being hoarded and concentrated within a single location. The Messenger of Allah ﷺ informed us in a narration that “The Muslims are partners in three, water, pastures and fire” [Sunan Abu Dawud].

The Khilafah will also establish a domestic consumption economy, which would not be dependent on imports or exports. Since the international trading system is based upon U.S hegemony therefore, participating within the international system would result giving the Kuffar authority over the believers.

Allah (swt) has revealed to our Master Muhammad ﷺ a complete comprehensive system where the Muslims would never need assistance from the disbelievers on how to manage the affairs of the Muslims. Thus, for the Muslims to prevail and escape the shackles of Western subjugation the sons of the ummah must yearn and work for the implementation of the Khilafah system and simultaneously resist the deceptive Kufr reforms from entering our lands. In conclusion, Allah (swt) says: يَا أَيُّهَا الَّذِينَ آمَنُوا اسْتَجِيبُوا لِلَّهِ وَلِلرَّسُولِ إِذَا دَعَاكُمْ لِمَا يُحْيِيكُمْ وَاعْلَمُوا أَنَّ اللَّهَ يَحُولُ بَيْنَ الْمَرْءِ وَقَلْبِهِ وَأَنَّهُ إِلَيْهِ تُحْشَرُونَ “O you who have believed, respond to Allah and to the Messenger when he calls you to that which gives you life. And know that Allah intervenes between a man and his heart and that to Him you will be gathered.” [Al Anfal: 24].