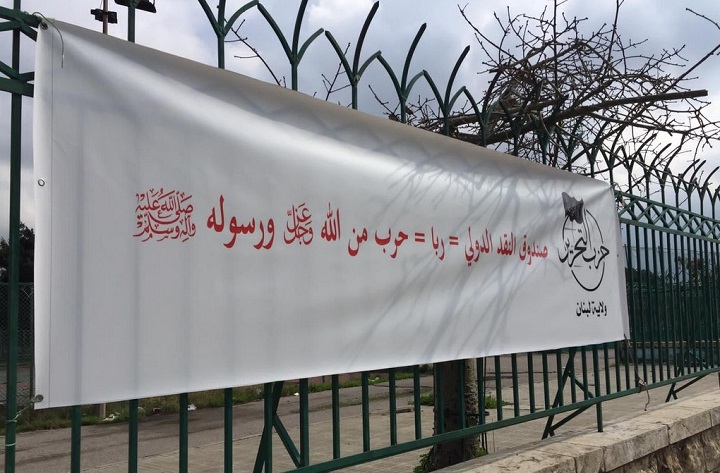 As part of Hizb ut Tahrir’s campaign in Wilayah of Lebanon to raise awareness of the dangers of the Lebanese authority’s embarking on the project of borrowing from the International Monetary Fund, claiming it is to bridge the deficit and the state’s debt, which amounted to nearly $100 billion or more, with a loan of barely more than $6 billion from the Fund, The party carried out a campaign to hang banners and posters across Lebanon, warning against following this usurious path, which portends war from Allah (swt) and his Messenger (saw), in accordance with the saying of our Lord (swt):

“O you who have believed, fear Allah and give up what remains [due to you] of interest, if you should be believers * And if you do not, then be informed of a war [against you] from Allah and His Messenger. But if you repent, you may have your principal – [thus] you do no wrong, nor are you wronged” [Al-Baqarah: 278-279].

The banners and posters briefly showed the conspiracy of the authority against the people of Lebanon, and the conditions imposed by the Fund, which the authority started to implement unofficially, such as devaluing the currency towards a unified exchange rate, lifting subsidies on basic commodities, freezing wages and others, as well as the dire consequences that afflicted them and affects the countries that the fund enters, such as the rise in youth unemployment, the decrease in the real value of wages, and the deepening of the phenomenon of poor workers due to the increase in prices. The posters showed some partial solutions to get rid of this path, such as canceling usury, rushing to prevent monopoly, imposing a tax on the wealth of the wealthy, the release of depositors’ money, and the activation of small primary industries. They also showed the radical solution, represented by working with workers for the Ummah’s revival through comprehensive change through the establishment of the second Khilafah Rashidah (rightly-guided Caliphate) State on the method of the Prophethood, and linking Lebanon with its Sham surroundings and the Ummah to benefit from its wealth and the wealth of the Islamic countries by the hands of its sincere sons.

We ask Allah (swt) that the people of Lebanon realize these dangers, and work for change with Hizb ut Tahrir, and stand united in the face of this authority that seeks to destroy Lebanon. The authority that despite its corruption and failure – which is known to the far before the near – its men are still trying to return to take power through the ballot boxes, to hand over Lebanon, that is floating on the riches of gas and oil, as an easy prey for the West, especially America.

We seize this opportunity while we are in Rajab 1443 AH, which coincides with the passing of 101 years since the destruction of the Khilafah State by the criminal of the era Mustafa Kamal, to call upon the scholars, sheikhs and intellectuals in Lebanon, especially at this critical stage, to adopt the project of establishing the Khilafah which Hizb ut Tahrir is working for after all the other projects fell off. The project of the party in the Draft Constitution of 191 articles includes general rules, the ruling system, the social system, the economic system, education policy, foreign policy and media policy, emanating and based on Shariah evidence from the Qur’an and Sunnah, the consensus of the Companions and Qiyas (analogy). This made its project qualified with the help of Allah (swt) to lead the Islamic state; the second Khilafah Rashidah on the method of Prophethood, the promise of our Lord (swt) and the glad tidings of our Prophet (saw). This will bring joy to the inhabitants of the earth and the sky, so the sky descends from its water and the earth sprouts its blessings, and Allah willing, Lebanon, its people and the rest of the country enjoy empowerment and security.