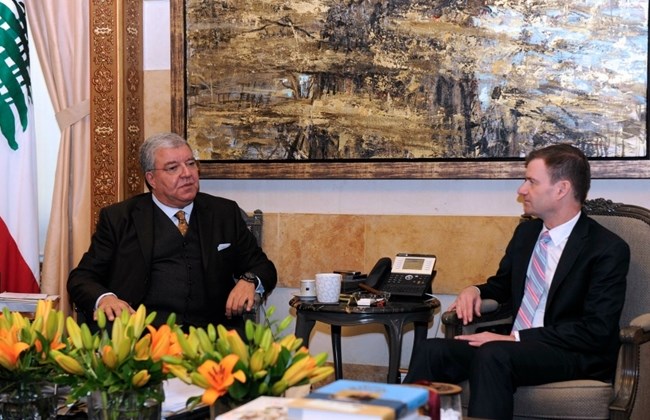 The Minister of Interior and Municipalities Nouhad Al-Machnouk is still confirming to the people of the land and the world that he is a protégé of the West. This is because he called in the speech he gave in the Security in the Middle East Conference for a ‘Doctrinal revolution’ just like what Abdul Fattah As-Sisi the President of Egypt called for. This call of his confirms his direction in respect to fighting Islam in accordance to the American agenda in focusing its control over the Muslims under the slogan of ‘fighting terrorism’.

As for his invitation to the Mufti of the Lebanese Republic, Sheikh Abdul Lateef Daryaan, to lead this ‘revolution’, then this represents a clear attempt to make the battle occur amongst the Muslims themselves. This is despite the true reality of this struggle being between the Islamic mode of living and the Western mode of living. However the master of the West, America, is not able to be the one that directs the propagation of the Western thought in the face of the Islamic thought due to it being a losing battle. For that reason it activates its agents in the region to strike at the Muslims by their own hands against one another in line with the principle of ‘Divide and rule’. Machnouk has affirmed time and time again that his complete and utter obedience is to the colonialist westerner and it has become clear to all of the people in Lebanon that he prefers the western mode and way of living as he openly declares pride in his secularism.

As for classifying Islam between the extremist and moderate then we say to him and those like him: Verily Islam is the Deen that Allah ‘Azza Wa Jalla has chosen for humanity. There is no such thing as a moderate Islam and another which is extreme but rather Islam is one and its texts are clear in respect to criminalising the rulers who betray Allah, His Messenger and the believers. They are the ones completely far-off from this pure and upright Deen.

We in Hizb ut Tahrir call the people of Lebanon and particularly the Muslims from among them to cast aside this Minister who has abandoned his responsibility towards protecting the people when they came out and demanded their fundamental living rights. This is as he was distracting himself outside of the land whilst bullets were being fired at the people in Beirut from those elements he is responsible for and other elements. He then went beyond that in respect to the organisers of the mobilisation when he accused them of being funded from outside the land as if he himself isn’t drowning up to his ears in obedience to those who are outside! It is Machnouk himself who lied openly and continuously to the people of the land when he denied the cases of torture in the Romia prison and was then shown to be a liar by the video clips that came out confirming the systematic torture and that it is rampant in the institutions that are subservient to his authority.

Indeed this conference is affiliated to the Western states and its goal is to preserve the colonial situation that prevails in the Muslim lands. This minister and those like him are nothing more than tools of the West which they use to preserve these circumstances. As for the true reality of the struggle then it is a struggle between Islam and the West and the Muslims must be aware of their enemy and its tools. They must know for certain that the correct way of dealing with those tools is to expose them before the public opinion and struggle against them in all political fields. In this way, the plans of the enemy that seek to divide the Muslims and single them out individually will be made to fail.