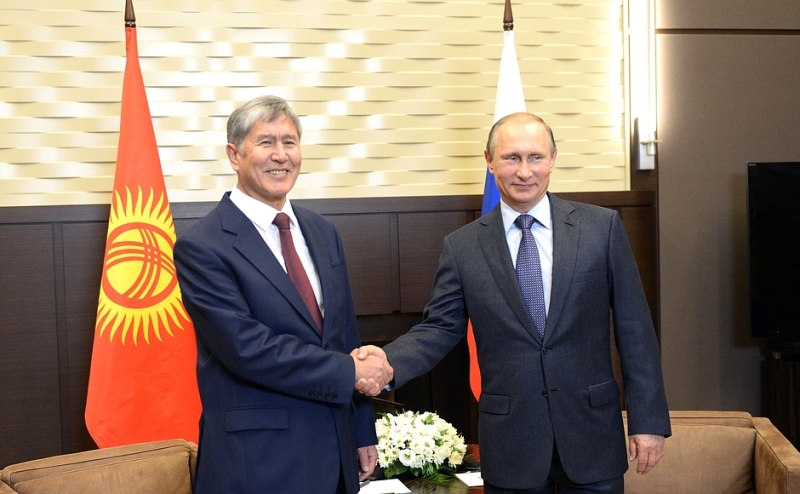 On August 13th, the BBC reported that the President of Kyrgyzstan Almazbek Atambayev made derogatory, insulting statements regarding the Islamic dress of Muslim women during a press conference, suggesting that it was potentially dangerous by associating it with terrorism. He said, “Women in mini-skirts don’t become suicide bombers!..Terrorists are insane people…Clothes also can change one’s thoughts sometimes.” His arrogant comments are his latest intervention in a national debate on cultural identity where he has claimed that Islamic clothing is contrary to Kyrgyz national culture. His remarks also follow several weeks of a government-sponsored campaign against the Islamic dress that included the erection of street banners degrading the Islamic headscarf and Niqab. These offensive, schoolyard-like posters showed Kyrgyzstani women in national dress on one side of the picture and women in Islamic dress on the other with the caption underneath, “Poor people! Where are we heading to?”.

This absurd link between the Islamic dress and violence is part of a wider Western-led global campaign to demonise Islam and discredit basic Islamic Ahkaam (rulings) in order to distance Muslims from their Deen. The idea that wearing a headscarf or face veil can transform a woman into a ‘would-be terrorist’ is an insanely ludicrous claim and further proof of just how intellectually bankrupt the leaders of the Muslim world are. The only dress which such rulers have adopted is one of humiliation, submission and servitude to their Western masters, the enemies of Islam. Having failed to convince Muslim women to adopt flawed Western feminist ideas, Atambayev and his like resort desperately to childish scaremongering.

We say to Atambayev… it is NOT the Islamic dress which is contrary to the true identity of the people of Kyrgyzstan, 80% of whom are Muslim and whose beliefs, culture, and heritage all emanate from Islam, but rather secular leaders such as you and the foreign Western-inspired secular values which are contrary to Islam and that you forcibly impose upon the population – even employing torture and execution if necessary! It is not the Islamic clothing that poses a threat to domestic and international security, but rather those colonial governments who wear the ‘suit of Democracy’ and who invade, plunder, and bomb lands slaughtering hundreds of thousands of innocents for selfish national interests and who support dictators such as you who do their arresting, torturing and killing at will any who oppose your authoritarian oppressive rule. It is not the Islamic culture which poses a danger to Kyrgyz society, but rather secular rulers like you who import Western liberal culture into the Muslim lands which causes depravity and harmful hedonistic lifestyles to spread amongst the people, eroding the sanctity of marriage and the unity of traditional family life, mirroring the social meltdown affecting Western states. Do you not know, O Atambayev that you will be thrown into the ravine along with the other destructive rulers who have brought nothing but devastation, oppression and misery to this precious Ummah and we will establish on the ruins of your obsolete regime the glorious Khilafah (Caliphate) based upon the method of the Prophethood.

Dear Muslim women of Kyrgyzstan! We call you dear sisters to be steadfast to the Akhaam of your true Islamic identity and to be patient over what you suffer as Aasiyah the wife of Pharoun and the great Sahabiyyat (ra) were, and to keep your sight always on your ultimate goal – the Eternal Heavens – so that you don’t stray even a hairbreadth from your Deen despite the great pressures you face. And we urge you to work with us in Hizb ut Tahrir for the establishment of the righteous Khilafah (Caliphate) upon the method of the Prophethood which alone will guard your Islamic dress and facilitate you in fulfilling all your Islamic obligations.

“The angels descend on those who say, ‘Our Lord is Allah,’ and then go straight: ‘Do not fear and do not grieve but rejoice in the Garden you have been promised.”