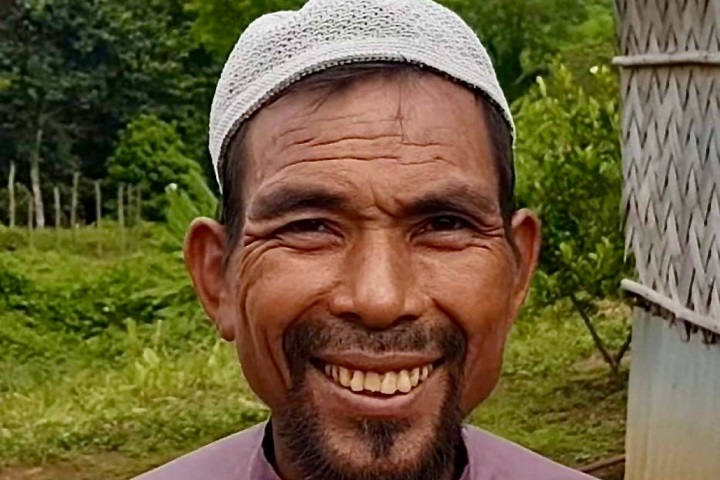 Hizb ut Tahrir / Wilayah Bangladesh offers its heartfelt condolences to the bereaved Muslims of the remote Bandarban hill-tract district of Bangladesh who have lost their inspirational leader Omar Faruk Tripura, a 55-year-old reverted Muslim who was slain in front of his house as a martyr (inshaAllah) at the hands of the enemies of Islam. We only utter what pleases our Lord: “To Allah we belong and to Him we shall return”. May Allah (swt) accept the brother among the Prophets, Siddiqeen, and Shuhada’ (martyrs) in the Paradise and make his story a strong aspiration for all of us to use our lives and wealth for the cause of Allah (swt). Brother Omar reverted to Islam from Christianity in 2014, and also helped revert 30 other families to Islam since then. He set up the very first mosque for the Muslims over there at his own expense and on his own land. He was the first Muslim in the remote Rouyachory village in Bandarban district, and now also had the honor to become the first to embrace martyrdom. As per the accounts of the Muslims of that village, a fanatic terrorist group was threatening brother Omar due to his relentless da’wah for Islam, and they finally killed him. The Muslim minorities of that area are now living in fear and anxiety since the police has failed to ensure security for them.

The story of this brother must be a wake-up call for all the Muslims in Bangladesh, especially those who are enjoying privileged status, to realize what should be the true roles of the Muslims at this juncture when Islam and Muslims are being attacked severely by the secular fanatics of the nation-state system. He was an extraordinary revert Muslim of our time who adopted the name ‘Omar Faruq’ to emulate the personality of the great second Khaleefah (Caliph) of Islam – ‘Umar bin Khattab (ra). Indeed, this brother emulated the great Umar ‘al-Faruq’ (i.e. the one who makes distinction between the right and the wrong) well. He stood up openly for Islam and tried to defend Islam without any fear against life threats. About such men, Allah Azza Wa Jal says,

“Among the believers are men true to what they promised Allah. Among them is he who has fulfilled his vow [to the death], and among them is he who awaits [his chance]. And they did not alter [the terms of their commitment] by any alteration” [Surah Al Ahzab: 23].

O Muslims, Hizb ut Tahrir will never shy away from reminding you the truth that Islam and the Muslims will never be safe under the ruling of secular democracy. Since secularism is in direct contradiction with Islam, its leadership considers the dominance of Islam as a big threat to its existence. Especially, when the spread of Islam in the hill-tract areas of Bangladesh is of critical importance in light of the regional geopolitics, the secular Hasina government will never act in favor of the Muslims by taking strong stance against the Kuffar terrorist groups over there. Therefore, in those remote areas in Bangladesh where Muslims are minority, Hasina government will let them be the victims of the Kuffar. In addition, in the mainland, it will suppress any political expression of Islam even if that comes out of the mouth of any individual Islamist. A recent abduction of a young Islamic speaker by a notorious state agency for his speeches about the imminent return of the Khilafah (Caliphate) and the conspiracy of the Kuffar against Islam bears witness to this fact. So, we sincerely call upon all the Muslims in Bangladesh to be inspired by the commitment of the martyred Omar Faruq for Islam, and support the work to re-establish the second Khilafah Rashidah (rightly guided Caliphate) State upon the method of the Prophethood. By this, the Muslims and the dhimmi (non-Muslim citizens of the State) will be lifted from darkness of the Western ideology, and they will be fully served by the State and their lives taken care of.

O Sincere Officers of Bangladesh Army, the truthful and courageous Omar Faruq did realize his mission, and thus kept his covenant with Allah by sacrificing his life to propagate Islam even though he was a very weak civilian. And while you hold the real key to power and authority, you should be more serious about keeping your promise to Allah (swt). You should take a strong stance to protect Islam and Muslims. You should rush towards removing the current secular rulers and hand over power to Hizb ut Tahrir to re-establish the Khilafah Rashidah. If you neglect in this duty, your material power of this world will be the biggest source of your eternal disgrace and humiliation on the day of reckoning before Allah Azza Wa Jal.