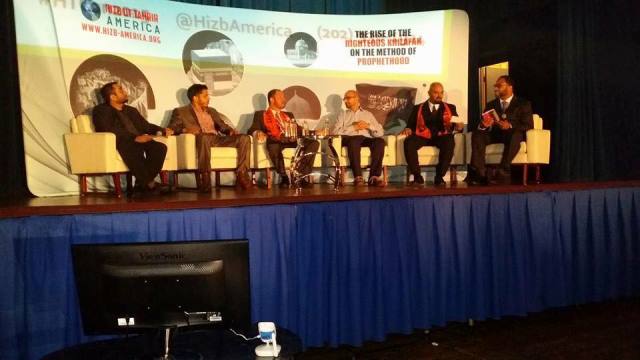 Hizb ut Tahrir / America concluded its annual Khilafah conference in the Chicago area on Sunday, May 31, 2015. This conference is part of a global campaign carried by Hizb ut Tahrir in America held on occasion of the abolishment of the Khilafah, the Islamic System of Ruling, in 1924. It is a global call upon Muslims worldwide to stand up to their responsibility to reestablish the state of Khilafah. The title of the Chicago conference was “The Rise of Righteous Khilafah on the Path of Prophethood“. The conference theme underscores the collective aspirations of Muslims around the world and the increasing depth of discussion regarding the details of the Khilafah and its eventual implementation.

The conference program contained four speeches followed by a keynote speech and concluded with a Q&A panel. The first speech, “Khilafah on the Path of Prophethood”, addressed the question of what is the Khilafah and provided the criterions to validate when the Righteous Khilafah has been established.  The second speech, “Khilafah – Mercy to Mankind”, presented what daily life would be like under the Khilafah. It specifically addressed how the Khilafah would be a mercy to mankind and how non-Muslim citizens would be treated with justice and equity. The third speech, “Reestablishing the Khilafah”, presented the method to reestablish the Khilafah and underscored that the Khilafah cannot be established through violent means. Specific steps the Prophet (peace and blessings upon him) took and their significance in establishing the Islamic State were used to explain the method in detail. The fourth speech, “Challenges facing the coming Khilafah”, highlighted the principal internal and external challenges the coming Khilafah will face and the resources and means it will have to resolve those challenges. The keynote speech, “Khilafah – Upcoming World Order“, conveyed how the coming Khilafah will become a leading nation which will play a crucial role in changing the world order. The speech highlighted how the Khilafah will facilitate in the equitable distribution resources and technology back to impoverished and exploited countries. A Question & Answer panel concluded the conference. Speakers answered questions from the members of the audience.

Hizb ut Tahrir is a global, Islamic political party working to resume the Islamic Way of Life by reestablishing the State of Khilafah in the Muslim world. The party does not seek or attempt to establish the Khilafah in any of the western countries including the US. The party does not use or approve of militant means to achieve its goals.