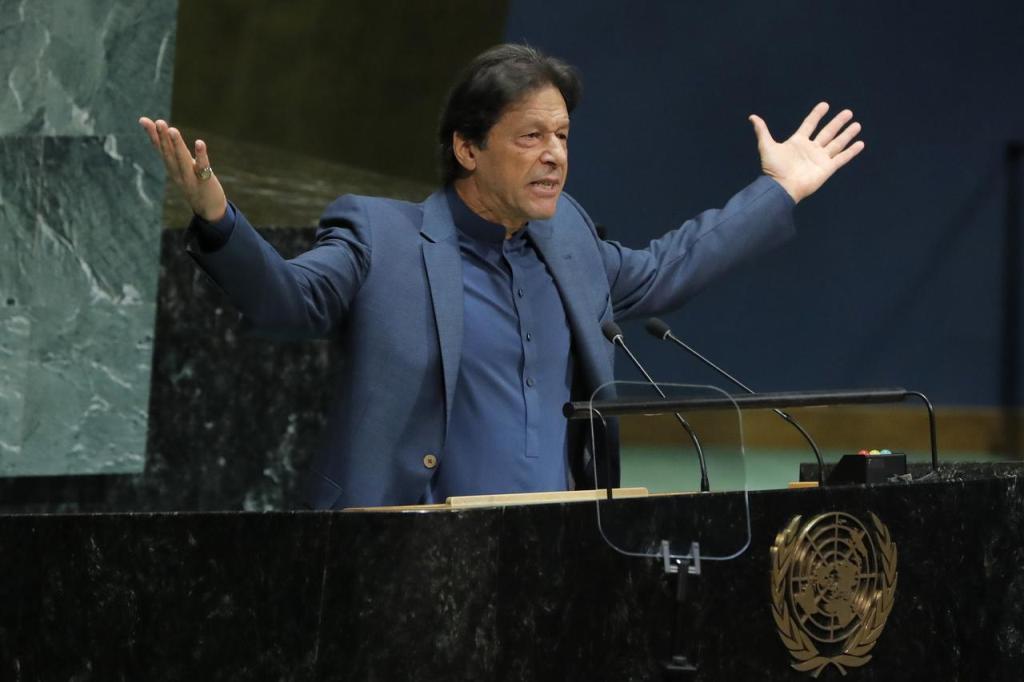 On October 5 2019, Khan warned, “anyone crossing LoC for humanitarian aid will play into hands of Indian narrative”. Earlier, Khan gave an impassionate reminder to the UN for its failure to help the Kashmiri people. Hence, Khan’s no war stance is quite clear: do not provoke India to attack Pakistani Azad Kashmir and leave it to the UN to liberate occupied Kashmir.

Pakistanis are extremely angry at Khan’s no war stance, and have taken it upon themselves to cross the LoC to assist their brethren in Kashmir. Equally, the people of Pakistan cannot understand why Khan has snatched the liberation of occupied Kashmir from Pakistan’s armed forces and handed it to the UN.

After all, what has the UN done for Pakistan? The UN has never stepped in to help the people of Kashmir, the UN was quick to acquiesce to the disintegration of Pakistan in 1971 and subsequently recognized Bangladesh as a separate country; and in late 1990s, the UN supported tough sanctions against Pakistan.

But Pakistan is not the only Muslim country that is a victim of the UN. Since its inception in 1945, the great powers especially America have used the UN to cement their hegemony all over the world. No people have suffered more at the hands of the UN then the Muslim ummah. The west mobilized the UN to carve up Muslim land such as the dismemberment of Bosnia and the division of Indonesia.

The west has exploited the UN to plunge a dagger deep into the heart of the ummah by creating the Jewish state and supporting its existence through the issuance of numerous resolutions or vetoes. The UN has also played the instrumental role in isolating Muslims from each other by imposing sanctions on Iraq, Libya, Sudan, Iran and Afghanistan. The west has manipulated the UN to justify the invasion of Somalia, and the occupation of Iraq and Afghanistan.

Given the UN’s criminal record against the Muslim world and its inability to restrain American hegemony, it beggars belief why Khan and other rulers of the Muslim world submit blindly to such an institution. Khan opened his speech with the aya  إِيَّاكَ نَعْبُدُ وَإِيَّاكَ نَسْتَعِينُ“It is You we worship and You we ask for help.” [Al Fatiha: 5] and then proceeded invoke help from the UN. His speech may have dazzled some, but Allah (swt) warns us to be vigilante. وَمِنَ النَّاسِ مَنْ يُعْجِبُكَ قَوْلُهُ فِي الْحَيَاةِ الدُّنْيَا وَيُشْهِدُ اللَّهَ عَلَى مَا فِي قَلْبِهِ وَهُوَ أَلَدُّ الْخِصَامِ “There is the type of man whose speech about this world’s life May dazzle thee, and he calls Allah to witness about what is in his heart; yet is he the most contentious of enemies.” [Al Baqarah: 204]

Today, the bitter irony is that while the rulers of the Muslim world pledge their fealty to the UN, America continues its global war against Islam—outside the confines of international law—by encouraging the Jewish and Hindu states to annex Palestine and Kashmir.

The only source of protection from the aggression of western powers and their instruments of terrorism such as the UN lies in the emergence of a powerful Islamic State. In fact it was the Ottoman Caliphate’s march towards Europe that encouraged European nations to conclude the Treaty of Westphalia and international law was born.

The Ottoman Caliphate stood firm against international law with such resoluteness that for many years it was able to demand warring countries to sign up to peace treaties on its terms and without surrendering the ummah’s resources, and handing over Muslim land to the disbelievers.