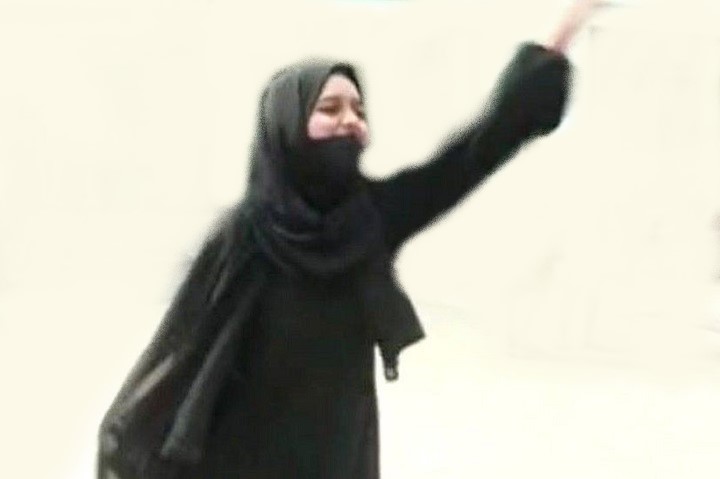 The video of a defiant daughter of the Islamic Ummah from Karnataka, in the Hindu State, went viral around the Muslim World in a matter of hours. She confronted a large number of Hindu extremist thugs, alone but for her Lord, Allah (swt), Who suffices for the believers. Her courage, perseverance and steadfastness upon Islam, in spite of overwhelming circumstances, captivated the hearts of the entire Ummah. Since then, phrases such as Allahu Akbar and “Sherni” (lioness) have been trending on Twitter. It is the passion for steadfastness within this Ummah that makes heroes of those who stand in front of the Hindu State. However, where are those who must protect our daughters, whether in Karnataka, Kashmir or al-Quds, with their blood, fire and steel?

Who must stand up for our daughter in Karnataka, or other daughters in Uttar Pradesh who have not been allowed to enter the classroom, whilst wearing hijab? Which Muslim state must protect our daughters in Palestine or Kashmir, or our daughters in France, from whose pure heads beastly crusaders have ripped off coverings? Where is the Muslim state to mobilize armies to protect the lives, property, honor and sanctity of our daughters? Do the lines drawn by the British Raj allow us to hand over helpless Muslim women to rampaging Hindu or crusader beasts? There is no divine text whatsoever that allows the response of the Muslim armed forces to be limited to the borders drawn by the kafir colonialists, after the destruction of our unifying Khilafah (Caliphate) on 28 Rajab 1342 AH, 3 March 1924. Had Muhammad bin Qasim been content with merely providing “moral and diplomatic support” to the oppressed Muslims of the Indian Subcontinent, then perhaps today we too would have been chanting Ram Ram, drinking cow urine and prostrating before idols.

The genuine sentiments and aspirations of the Islamic Ummah are obvious now all over the world. However, what are the stances of the current rulers of Muslims? They have stabbed the Kashmiri jihad in the back, which emboldened Modi in legalizing his occupation of Kashmir. Despite the crossing of this red line, the spineless Bajwa-Imran regime refused to mobilize Pakistan’s willing and capable Muslim armed forces. Worse, the regime called Jihad in Kashmir betrayal of the Muslims in Kashmir. These visionless rulers maintain backchannel talks with New Delhi, whilst granting Modi the gift of ceasefire on the Line of Control, which gave the Hindu State the capacity to incite terrorism in Balochistan and beyond. The protection of Muslim daughters cannot be expected from those who trade over the honor of the Prophet (saw) for foreign currency, for it can only be delivered by a Khaleefah Rashid, seeking the reward of Allah (swt) alone. The Messenger of Allah (saw) said,

“The Imam (Khaleefah) is a shield for them. They fight behind him and they are protected by (him from tyrants and aggressors). If he enjoins fear of Allah, the Exalted and Glorious, and dispenses justice, there will be a great reward for him; and if he enjoins otherwise, it redounds on him.” (Muslim).

So, O Armed Forces of Pakistan, who amongst you will be the loyal son of Muhammad bin Qasim, to crush the Raja Dahirs of today, tying them in chains to present them to the Imam (Khaleefah) of Muslims? Uproot the cowardly leadership by granting your Nussrah now to Hizb ut Tahrir for the re-establishment of the Khilafah (Caliphate) on the Method of Prophethood, so that you march, raising Takbeer, whilst enemies retreat in fear.