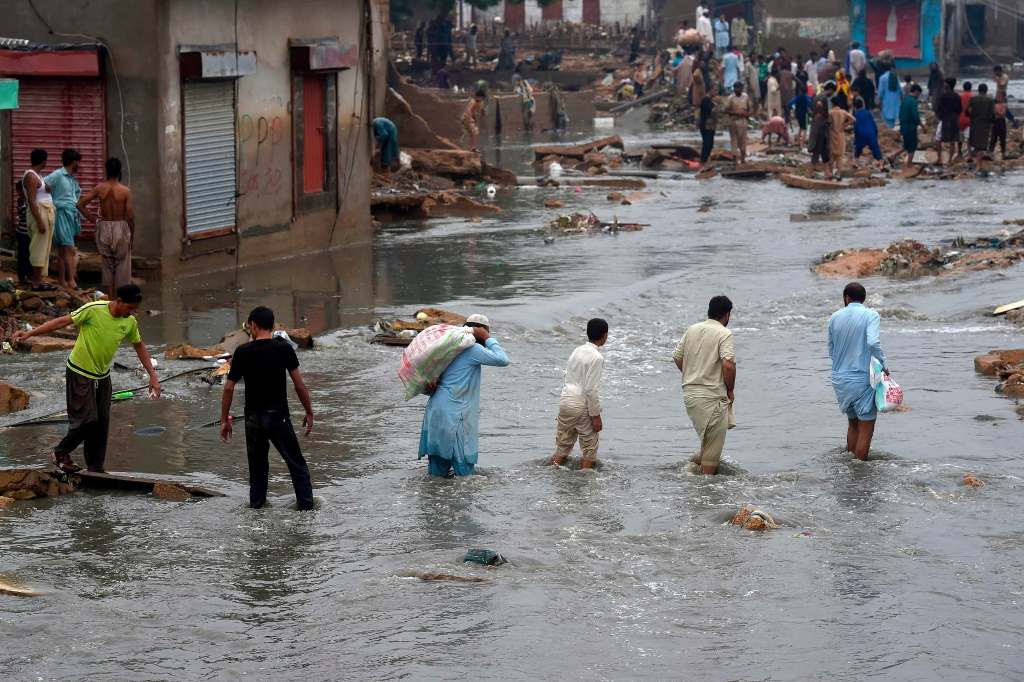 Heavy rains have hit parts of Pakistan, including the financial capital of Karachi, for a fifth straight night, bringing further flooding to towns and villages and leaving at least 36 people dead. (The Guardian, 28/8/2020)

The scenes of floating cars, people wading or swimming through water in Karachi are hitting the headlines in Pakistan.

Monsoon season brings about much needed rain to the region but along with it a lot of problems due to poor infrastructure and mismanagement. Karachi is the largest city in Pakistan and seventh largest city in the world. Despite its population, the local authorities fail to provide the citizens with adequate resources to ensure water, electricity and manage waste and sewerage. The current rainfall has been the highest since records started but, the monsoon brings yearly chaos.

Imran Khan, PM of Pakistan gave a statement, saying his government would “be announcing a plan for a permanent solution to the problems caused by floods by cleaning of drainage channels, fixing of the sewage system and resolving the huge challenge of water supply to the people of Karachi” (Thursday, 27th August).

Like all Muslim lands where problems occur, most are not unknown to occur or sudden, but are a result of years of systematic failures. One government comes and is faced with the neglect of the previous. If the current government can fix one of the many issues, it also will leave behind its own legacy of incompetence and neglect in another area. At times people become resigned to the state of affairs, thinking there is no one who can fix these problems as they are too big in the first place.

However, the Islamic system should be seen as the viable alternative. It offers relief to all citizens of the state by ensuring government officials are accountable whilst they are in office. The Majlis al Ummah has representatives from the masses who can alert the authorities to local needs and even call for the dismissal of incompetent governors (walis). All citizens have the right to public services, such as medical care, education, sanitation, infrastructure. At present it is some of the wealthier neighborhoods of Karachi, as with other cities, that alone have regular electricity, water and refuse collection. But even they are not spared by the flood waters as the whole drainage system is choked.

Neglect of the majority of the citizens while the few with wealth can survive is the hallmark of the rotten Capitalist system. However, in the end everyone gets affected and cannot escape the systems failures.

This is not a one-off occurrence due to heavy rainfall but shows years of neglect on the part of the provincial and national government. It is time to clean up the whole system, flush it away, and bring back holistic and radical change through the implementation of the Islamic system of governance, the Khilafah (Caliphate) upon the methodology of the Prophethood.