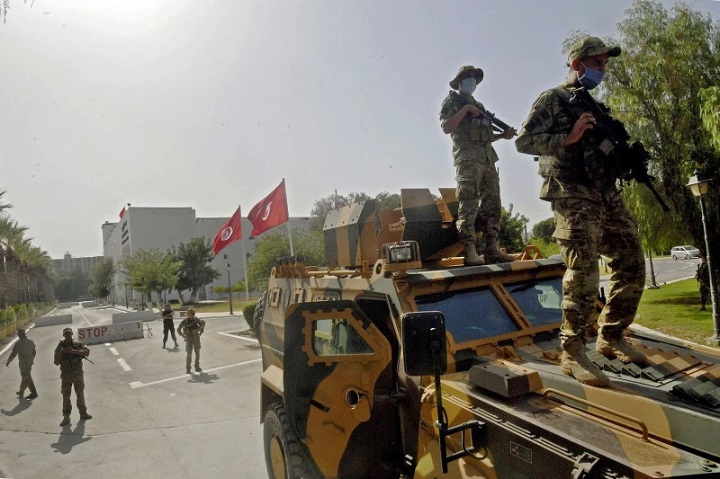 Kais Saied, the Supreme Commander of the Armed Forces in Tunisia, did not bid farewell to our officers and soldiers from our military helicopters unit, Thursday, August 26, 2021 at the military base in Al-Aouina, in executing the decision issued on 7/13/2021, where Parliament and its President approved at the time to send military forces abroad… did not bid farewell to support our people in Palestine and Gaza, whose people are besieged and killed, and he did not send them to resolve the conflict between Muslims in Yemen, nor does he care about our brothers in East Turkestan nor our people in Burma, but rather he sent them with the approval of the parliament and its president to the Central African Republic under the banner of the United Nations, a country torn by ethnic and racial conflicts, ignited by the terrible French influence, and the intervention of other colonial powers and their mercenaries. The task that Kais Saied accepted that the Tunisian force would perform there was to protect “civilians” from the actions of armed groups. The armed groups in Central Africa concerned today, according to the United Nations, are the Muslim minority that are subjected to a process of genocide by the Christian majority, and they demand their legitimate rights to a just rule and a decent life. Their rights are being violated with public support from France, and carry the Tunisian detachment to be in the face of its Muslim brothers. One of the tasks of our sons of officers and soldiers is to protect the staff and property of the United Nations Organization there, which is the root of all our afflictions and the justification for the aggression of the enemies of our Ummah against us everywhere. It also supports disarmament, demobilization and reintegration processes.

However, the head of state, while pushing the sons of our armed forces to serve colonial plans and international conflicts and to aid the forces of evil that are working to bury the struggles of peoples for liberation from the tyranny of colonialism under the deception of the United Nations and the adoption of the sayings of the enemies, was satisfied from the spoils with the return of our armed forces from this service “with testimonies of gratitude and acknowledgment” And he found nothing to gain, while he was immersed in “international relations” by involving our officers and soldiers in this shortcoming. Kais Saied did not find anything to crown their missions except to mislead the armed forces by engaging them in his internal conflicts with his political opponents by a wink from the frozen parliament speaker, to obscure the crime that he oversees throughout its seasons.

“You will never find a people who ˹truly˺ believe in Allah and the Last Day loyal to those who defy Allah and His Messenger, even if they were their parents, children, siblings, or extended family.” [TMQ Al-Mujadila: 22].