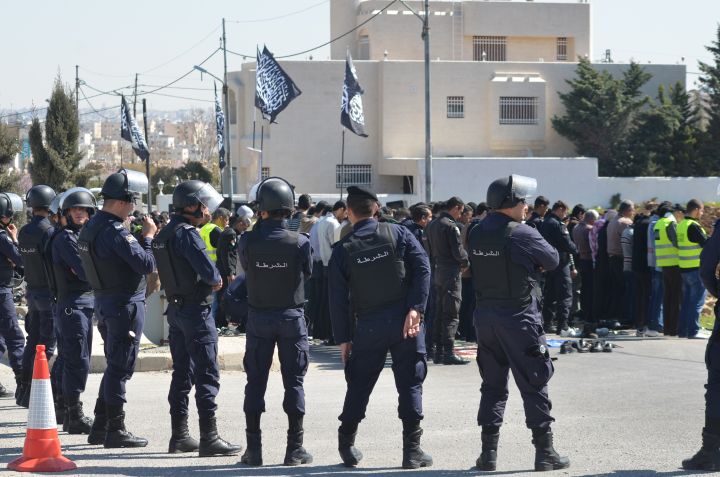 The regime’s security services in Jordan, on Friday 5/1/2018, prevented the implementation of demonstrations for the sake of Al-Quds, Al-Aqsa and all of Palestine that had been announced by Hizb ut Tahrir / Wilayah of Jordan, in front of several mosques in the capital Amman and Al-Russiefa.

The sites of demonstrations have been transformed into military barracks of various security agencies, where the security forces arrested three members of Hizb ut Tahrir in front of the Great Mosque of Nazal and attempted to arrest others in other sites. The security services prevented journalists from filming and tried to confiscate their cameras, and they confiscated communication equipment from various people.

We in Hizb ut Tahrir / Wilayah Jordan, and with us the honorable people of the Ummah, in the face of this prevention and this repression confirm that we will not stop supporting al-Aqsa, Al-Quds, and all of Palestine in front of the official weakness and deception of the regime in Jordan, and we will not cease to appeal to the armies of the Ummah to do its duty towards Masjid Al-Aqsa, Al-Quds and all of Palestine.

This prevention of the demonstrations confirms that the Jordanian regime’s claim of its concern for Al-Quds and Al-Aqsa is a false claim, and that it is only for local and media consumption and nothing more.