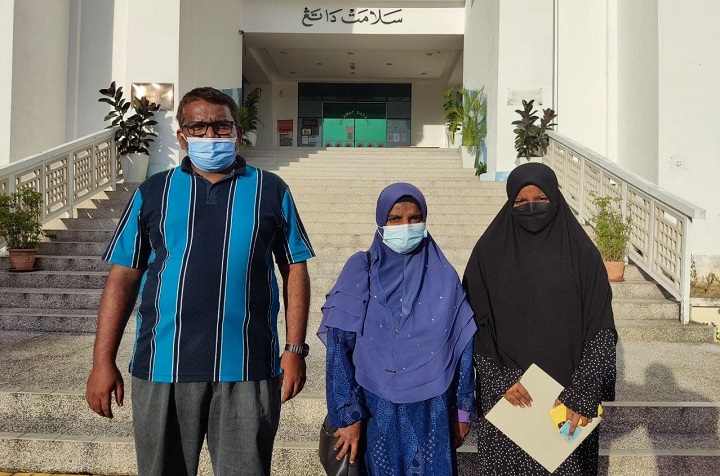 The Negeri Sembilan Islamic Religious Affairs Department (JHEAINS) arrested the wife and family members of a Shabab (youth) of Hizb ut Tahrir / Malaysia (HTM) in Seremban, at about 11.00 pm last Tuesday. Prior to the arrest, their house was searched by a team of JHEAINS enforcement officers in a joint operation with the Royal Malaysian Police (PDRM) where some books were confiscated. During the incident, the said Shabab was not at home and he was contacted via phone by his wife who explained what had happened. Via the same phone, he was asked by the JHEAINS officer to return home immediately. Apart from his wife, 45, and his daughter, 22, also detained were two of his employees, one of whom is his nephew. All those detained were then taken to the Islamic Da’wah Centre, Paroi, for interrogation.

The HTM Shabab, Bro. Jamaluddin Maidin Syed, 45, was again contacted by phone and asked to come to the Islamic Da’wah Centre. Consequently, he then went to the Centre around 2.30 am and was detained by JHEAINS immediately. All of them were accused of committing an offense under Section 50 of the Negeri Sembilan Shariah Criminal Enactment 1992 – “insulting, put into contempt, etc. the Islamic religion” which is liable to a fine not exceeding five thousand ringgit or imprisonment for a term not exceeding three years or both upon conviction. All of them were interrogated throughout the night and morning and were not allowed to sleep. Worst, the request by his wife and daughter to perform Isha’ prayers were denied, until 5:30 am. At about 4.00 am, both of his employees were released, while the interrogation of Jamaluddin Maidin Syed, his wife and daughter continued until the evening of 27th October. The three were later released at around 5:30pm on bail of RM2,500 each by the Seremban Shariah High Court.

O JHEAINS! You have indeed clearly violated Islamic law by breaking into a person’s house and seizing his/her property without permission. You attempted to disrepute and intimidate the occupants and your action was indeed based on despicable slander. Did you know that the Quraish disbelievers, while besieging the house of the Messenger (saw), did not break into his (saw) house because they still had respect of the house and its occupants? They still had dignity and shame. They waited outside the house until morning because their dignity forbade them to break into a person’s house by force. However, you no longer have that dignity and shame, breaking into other people’s house, seizing property and intimidating the wife and children of the occupants!

We, Hizb ut Tahrir / Malaysia hereby vehemently protest the arrest of our member and his family, and the search and confiscation by JHEAINS. Indeed, this arrest and confiscation are a clear cruelty and violation of not only Islamic law, but also the laws they have created themselves. The accusation that our members are insulting Islam under Section 50 is so absurd that even a mountain would be split asunder hearing such lies!

Not satisfied with the arrest, the Mufti of Negeri Sembilan in a comment to the Harian Metro Newspaper on the arrests, stated that Hizb ut Tahrir’s teaching is extreme and contrary to Ahlu Sunnah Wal Jamaah, leading to division and affecting national security. We are indeed not surprised by this remark as it is the same narrative and accusation casted by the religious authorities in other states as well, which have already been answered by us and none of them are able to reply to that answer and by the will of Allah (swt), they will not be able to answer it until the Day of Judgment, because what they had casted are merely slanderous fabrications and lies against Hizb ut Tahrir.

We wish to stress that JHEAINS’s action is more extreme than the action taken by the Religious Department of other states. JHEAINS had arrested not only the Shabab of Hizb ut Tahrir who did not commit any offense, but also arrested his wife, daughter and two employees. JHEAINS’s accusation that the HTM’s member and his family have insulted Islam is also an extreme accusation. In fact, arresting a preacher and treating a preacher as a criminal, is itself an extreme act by the religious authorities, not to mention in a situation where so many perversions and sins in the country are ignored by the religious authorities.

Declaring Hizb ut Tahrir’s teaching as extreme is merely a narrative propagated by the West which is now in fear of Hizb ut Tahrir’s calls to re-establish the Shariah and Khilafah (Caliphate) State, as this call is being answered by more and more Muslims around the world. The West knows that all its evil plots and domination over the Islamic world will come to an end and they will receive due lesson from the Caliph when the Khilafah is established shortly. On that basis, they vigorously obstructed the calls of Hizb ut Tahrir, mobilizing all their agents in the Muslim world to fight Hizb ut Tahrir, by sowing various slanders, accusations and lies against Hizb ut Tahrir, including accusation of being extremist, radicals and terrorist. While at the same time, the West continue to praise moderates, liberals, LGBTs, democracy preachers, and even tyrannical rulers throughout the Muslim world; because they are all in line with Western values and interests.

We wish to stress that the arrests of members of Hizb ut Tahrir were made none other than due to the political fatwa that is full of defamation and fabrication against Hizb ut Tahrir. For the umpteenth time, we wish to remind the religious authorities lest you think that with the arrests, defamation, lies and all the cruelty you have perpetrated against the members of Hizb ut Tahrir, will stop or slow down our Da’wah, instead, our Da’wah will continue to escalate since we carry it out merely to gain the pleasure of Allah (swt), not to gain the pleasure of man. We carry out the task to establish the Deen of Allah (swt) in this world with our eyes looking only at the pleasures of Hereafter, unlike you who carry out the task of forbidding the Da’wah with your eyes are only looking at worldly pleasures!

O religious authorities! Since we are still hoping goodness for you, hence we would like to end this press release with a piece of reminder, in case you still have a piece of sincerity and fear of Allah (swt):

“Those who persecute the believing men and women and then do not repent will certainly suffer the punishment of Hell and the torment of burning” [Al-Buruj: 10].