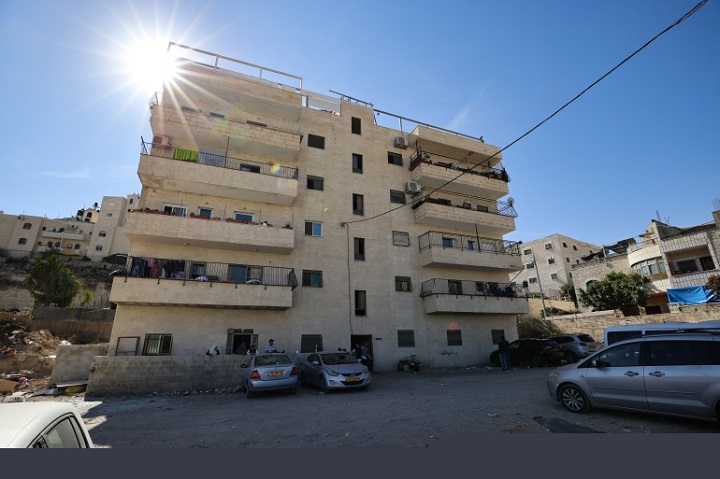 Some 70 Palestinians, about half of whom are children, are at risk of forced displacement in the Jerusalem neighborhood of At-Tur as they await a Jewish entity’s court decision over the fate of their residential building; where they were informed that they had a week left in their homes before the building would be demolished for lacking a building permit. They must either pay 200,000 shekels ($64,400) with a possible refund and have until the end of the month to self-demolish, or the state will execute that action – at a cost of two million shekels ($644,000). This five-storey building lies in the neighborhood of At-Tur which is also known as Jabal al-Zaytun (Mount of Olives). It has housed 70 residents from 10 families since its construction in 2012 without a building permit, like many other homes in the area. The residents have repeatedly applied to obtain a permit, and spent close to nine years in courts battling the demolition order, but were met with rejections by Occupation authorities under different pretexts each time.

Unlicensed construction in At-Tur and other neighborhoods of Jerusalem is not because people do not want to obtain licenses, but because the Occupation authorities reject the issuance of building permits in these neighborhoods and others in the eastern part of the occupied Jerusalem. This is part of a restrictive planning regime that makes it virtually impossible for Palestinians to obtain building permits, impeding the development of adequate housing, infrastructure and livelihoods, under the dramatic increase in the neighborhood’s population. In addition, under the pretext of non-licensing, the Occupation government follows the policy of forced displacement and demolition in those neighborhoods and others throughout Jerusalem; in the framework of evacuating the blessed city of its people. The Occupation courts give the legal cover for their government for the implementation of these programs. Only in 12% of the eastern Jerusalem area are the people of Palestine allowed to build in, compared to 42% allocated to settlers. Many of the settlement masterplans and projects seeking full control of the whole of Jerusalem were proposed. Among these plans, is the construction of the bypass in Jerusalem, the so-called American Road that encompasses East and West Jerusalem, the third phase of which includes a tunnel underneath the Mount of Olives and the mentioned At-Tur neighborhood.

Those most affected by this policy are women and children who live in those neighborhoods and homes. Their lives are full of confusion, fear and concern. They do not feel tranquility nor do they live in [their homes] due to the Jews’ ongoing threat to demolish their homes and the orders to be evacuated under the pretext of unauthorized construction, as the Jews rattle their nerves and drain them financially and emotionally, which negatively affects their lives completely.

This occurs under the eyes and ears of all the hypocrites, who are spineless and pretending to cry for Jerusalem, its sanctities and its people, and the first of whom is the Palestinian Authority of shame which stands helpless and servile in the face of these colonial settlement plans and projects. It stands blindly submissive and deaf to the calls of these women and children who are under the threat of being thrown into the open, without a roof to shelter them or a wall to protect them, while it boasts day and night with hollow slogans about Jerusalem and defending it, and while it has become the arm of the malevolent occupation against it (Jerusalem) and against Palestine and its people.

So, O people of Palestine, and O owners of those houses:

You know that you will not be protected by neither the UN resolutions, nor the international courts, neither by the rights organizations, nor the Ruwaibidhat who are content with betrayal and failure. And you know that nothing will protect you but a state that rules by Islam and which will sever the Kuffar and all the conspirators. This day is coming soon, with the permission of Allah, no matter how much injustice and darkness pervade. So have sincerity of the intention to Allah Almighty, for victory is only from Him (swt),