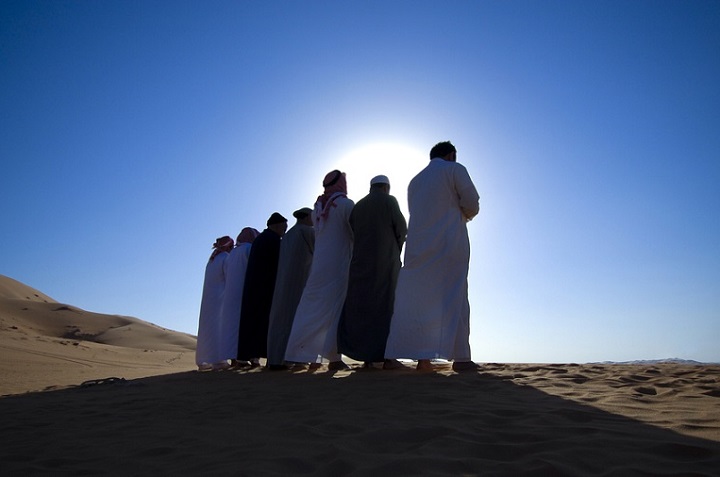 Every day, in every prayer, obligatory or nafila, Muslims read the saying of Allah, the verse in Surat Al-Fatiha:

“It is You We Worship and You We Ask for Help.”

So, Muslims will admit and declare their submission to Allah (swt), and they will have Tawheed, obey Him, worship Him Alone and seek help from Him (swt) in worshiping Him, and His obedience in all their affairs. It is stated in the tafseer of Ibn Katheer: “We do not worship but you, and we do not rely on anyone but you, and this is the perfection of obedience.” Religion is based on these two meanings, and some of the predecessors said: Al-Fatihah is the secret of the Qur’an, and its secret is this word:

The first renounces polytheism, and the second renounces strength and power, and delegates matters to Allah (swt). This meaning is found in more than one verse of the Qur’an, Allah (swt) says:

“so worship Him and rely upon Him. And your Lord is not unaware of that which you do” [Hud: 123]

“[He is] the Lord of the East and the West; there is no deity except Him, so take Him as Disposer of [your] affairs” [Al-Muzzammil: 9]. In addition to this noble verse:

It is a condition for worship to be accepted by Allah (swt), that it is purely for Him Alone. Allah (swt) says:

“Say, [O Muhammad], “Indeed, I have been commanded to worship Allah, [being] sincere to Him in religion” [Az-Zummar: 11].

“And they were not commanded except to worship Allah, [being] sincere to Him in religion, inclining to truth, and to establish prayer and to give zakah. And that is the correct religion” [Al-Bayyina: 5].

Sincerity is singling out Allah (swt) with the intention of worship and the hope of reward from Him Alone.

On the authority of Abu Huraira (ra), the Prophet (saw) said:

“Allah (glorified and exalted be He) said: I am so self-sufficient that I am in no need of having an associate. Thus he who does an action for someone else’s sake as well as Mine will have that action renounced by Me to him whom he associated with Me.” [Related by Muslim]

It is also required that worship is in the manner and way that Allah (swt) commanded and taught to us by His Messenger (saw). Performing worship requires knowledge of the worships and knowledge of its rulings and how to carry them out them prior to performing them.

Being servants of Allah (swt) means carrying out His commands and adhering to His judgment in everything that He commands and what He forbids. Worship in its general sense is not limited to performing individual acts of worship that regulate a person’s relationship with his Lord, such as prayer, fasting, zakat and Hajj, but rather extends to include a person’s relationship with himself through food and clothing, and his relationship with other people through transactions, building the land and the succession in it and working to implement His (swt) law on the earth and carry the message of Islam and its call to the world.

Being servants of Allah (swt) means that we seek His help to perform acts of obedience and worship, and we seek His help in keeping away from the prohibitions and overcoming the whispers of Satan and the talk of the soul that commands evil.

“O Mu’adh, I will give you some advice – Never leave the recitation of this supplication after every prayer: ‘O Allah, help me to remember You, thank You, and worship You perfectly.’” [Narrated by Abu Dawud and others]

It means that we seek His help in all aspects of our lives and that we resort to Him and ask for His help in all the harm that befalls us in the affairs of our world and in the harm and difficulties that befall us in carrying the call of Islam and our endeavour to establish its religion on the earth, and our focus is Allah’s (swt) saying:

“And whoever relies upon Allah – then He is sufficient for him. Indeed, Allah will accomplish His purpose. Allah has already set for everything a [decreed] extent” [At-Talaq: 3].

It means that we do not submit to the oppressors and the enemies of the Deen, and we do not turn to them and ask help from them, for Allah is with us, and their strength and their kingship will perish no matter how long it takes. Allah (swt) will inevitably help us, and whoever relies on them, he will have no support, and whoever relies on Allah (swt), he will not be disappointed, Allah willing.

The month of Ramadan is a great opportunity to renew the covenant with Allah (swt), and to declare our submission and surrender to Him (swt), and His rulings; and to provide us with obedience and worship, working to change this corrupt reality, seeking the help of Allah (swt), trusting in Him, and trusting in His victory, so let us go forth in this path and roll up our sleeves and work hard.