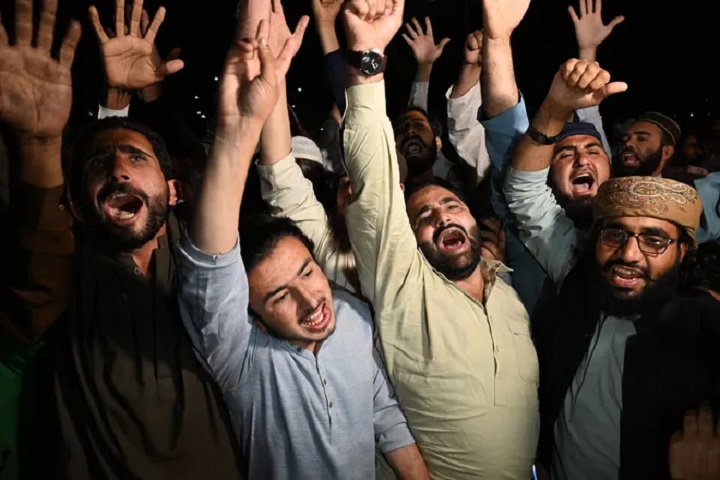 It is clear from the strong public response to the struggle for power in Pakistan that the Muslims want independence from the kafir colonialists. Prominent in the speech of the protestors is the call for ending slavery to America, as well as condemnation of the traitors within the military and political leadership. Hizb ut Tahrir / Wilayah Pakistan directs the public response to the following three-point agenda:

1. Call for the Abolition of Democracy

The system of Democracy has never and will never allow any individual or party to secure independence for Muslims from colonialists. It is a system of man-made law which is easily manipulated by the whims and desires of human beings, to secure Western agendas at our cost. Allah (swt) said,

2. Call for the Establishment of the Khilafah (Caliphate) on the Method of Prophethood

3. Call the Armed Forces to Extend Nussrah for the Khilafah

The system of Democracy only allows into power those who will serve the US. Democracy must be uprooted in accordance with the Prophetic Sunnah. The Messenger of Allah (saw) stripped the kufr system of its physical support from those who had the material power to secure its survival. He (saw) personally met the men of war, fire and steel, and demanded from them the Nussrah for the Deen. He (saw) sought the strong, discerning material capability in detail, asking, «وهل عند قومك منعة؟» “Do your people have strength?” Thus he met many tribes including; Banu Kalb, Banu Hanifah, Banu Amr bin Sa’asah, Banu Kinda and Banu Shaiban. He (saw) persisted in this methodology patiently until Allah granted success when the Ansar (ra) granted the Nussrah and the Islamic State of Madinah was established. So let all those sincere for real change demand from their fathers, brothers and sons in the armed forces to extend Nussrah for the re-establishment of the Khilafah on the Method of Prophethood.