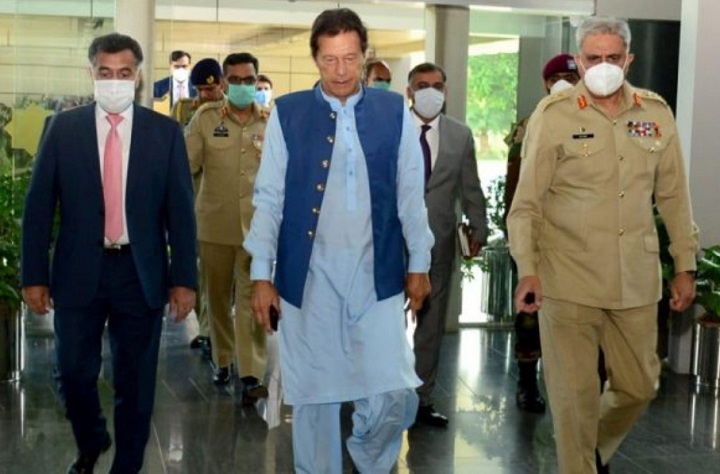 On 1 July 2021, in Parliament House, General Bajwa and the Director General of ISI, Lieutenant General Faiz Hameed, briefed the political leadership on the national security situation, particularly regarding Afghanistan. The subsequent media coverage of the eight-hour briefing makes clear that both the political and military leadership are on the same page of colonialist slavery, to both the United States and China. Both agree that Pakistan’s considerable capabilities are to be used to secure US influence within Afghanistan, after its humiliating defeat. Hizb ut Tahrir / Wilayah Pakistan issues the following points in this regard:

1) The Muslims of Pakistan and their armed forces must actively resist the exploitation of Pakistan’s considerable military, political and diplomatic capabilities, as well as deeply-rooted brotherly Muslim ties, to secure the puppet government of the crusading United States in Kabul, from the relentlessly advancing Afghan resistance. Allying with the attacking enemy kuffar is strictly forbidden in Islam and an open betrayal of Allah (swt), His Messenger (saw) and the believers. Yet, Pakistan’s rulers act as hired facilitators to prevent the liberation of Kabul, forcing the Afghan resistance to abandon the comprehensive, unrestricted implementation of the Islamic Shariah Law, in the name of power sharing with lowly US agents.

2) The Muslims of Pakistan and their armed forces must demand the immediate severing of the GLOC and ALOC supply lines for the American crusaders, which are critical to maintaining the US infrastructure in our region post-withdrawal, availing it “over the horizon” capabilities which it could never provide for itself. Such co-operation with the United States is to facilitate the projection of air power, to prevent the liberation of Kabul and other key strategic locations from US influence, mirroring the model the US adopted for Iraq.

3) The Muslims of Pakistan and their armed forces must reject the fencing of the border on the colonialist Durand Line, which is a devious US ploy to sever the warm, long standing brotherly Islamic ties between the Muslims of Afghanistan and Pakistan, through promoting the bitter rivalry of destructive nationalism and preventing the free movement that has always bolstered combined resistance against foreign regional influence. The Muslims in both these Islamic Lands believe in one Allah (swt), one Messenger (saw) and one Noble Book and must remain alert to the dangers of the fires of colonialist divide and rule policy.

O Muslims of Pakistan and their Armed Forces! The Bajwa-Imran government has no political vision but for our enslavement by anti-Islamic powers like the US and China. With the political and military support of the Afghan Muslims, you previously ejected the Soviet Russian superpower, whilst now the noble Afghan resistance has defeated the coalition forces of forty-two countries, with nothing but the most modest of weapons and a firm, unshakeable Iman. Is this not ample proof that our weakness is not through a lack of military and economic resources, but through US-approved colonialist agents, who burden us with their treacherous alliances with our enemies? The United States depends on our capabilities for its regional agenda, so what prevents us from pursuing Islam’s agenda of unifying Afghanistan, Central Asia and Pakistan and beyond as a single Khilafah? Bury the US colonialist Raj with your hands, by striving to re-establish the Khilafah (Caliphate) on the Method of Prophethood in its place. Pakistan’s resilient agriculture will secure our food needs, the Caspian Sea’s vast energy reserves will meet our energy needs and the graveyard of the empires, Afghanistan, will be bolstered by the might of Pakistan’s military and nuclear power, to secure our lands. So, Muslims of Pakistan’s Armed Forces! Come forth to provide your Nussrah to Hizb ut Tahrir so that you are finally led by rulers that obey none but Allah (swt), depending upon Him (swt) Alone. Allah (swt) said,