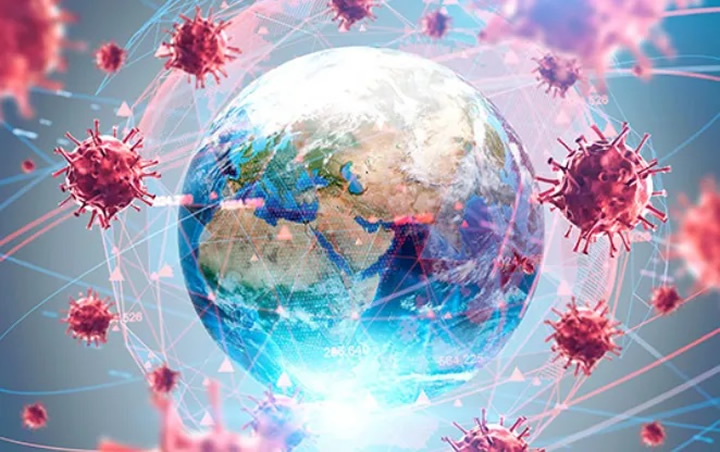 The year 2020 has been one to forget for many people throughout the world, as the wrecking ball of Covid-19 continues to smash through the societal, economic and political norms of countries around the world, both great and small. Today, casual conversation would not be complete without mentioning lockdowns, R numbers, quarantine, and giving duas and condolences upon hearing that another soul has passed into the Hereafter. In this climate, we now understand more than ever the words of Allah (swt), where He clarifies that:

“Those who, when an affliction visits them, say, ‘Verily we belong to Allah, and verily to Him do we return.” [TMQ Surah al Baqarah 2:156].

The spread of infections and deaths across the world continue to grow at an alarming rate. Whilst we are numbed to soundbites about the health and economic inequalities between the rich and the hoard of poorer, meagre countries, the stark data on the pandemic lays out in black and white how the tables have turned. Who would have imagined that six of the top ten countries for confirmed cases are from the West, totaling in the millions? Who would have envisaged that close to 400,000 people have died of this scourge in the ‘greatest nation on Earth’, the United States of America? Who would have believed that the countries in the Far East are being held up in high esteem as models in containing the spread?

This pandemic has shown, once again, that Capitalism is suffering from serious issues. The economic battering from the Great Recession, which prompted bailouts in the hundreds of billions for the avaricious banking institutions and imposed austerity measures on innocent citizens for years, had barely passed a decade before the ‘Rona reared its head. The long queues of people waiting for their weekly load of foodstuffs from the foodbank, shows the starkness of the threat to wealth and prosperity. A threat that is starkly captured when the Conservative Party, the party of austerity, has found its magic money tree and cannot stop spending cash to save the economy, implementing furlough schemes and providing payment holidays, with spending deficits on course to extend into double digits. The party of austerity has become the party of spend, spend, spend; with more economic pain being stored up for future generations and for many decades to come.

The social fabric has also been torn apart. The concept of individualism, so pervasive throughout the Western culture, has laid bare the mental health epidemic of its citizens, which, although evident before, has become headline news during the pandemic. Report after report detail the exponential growth of calls to mental health helplines from people stricken with anxiety and depression, with modelling by the Centre for Mental Health forecasting that as many as 10 million people in the United Kingdom will need new or additional mental health support as a direct result of the coronavirus epidemic. Drug overdoses, a tell-tale sign of loneliness and despair, have increased such that a record 621 people had died of overdoses in San Francisco by mid-December compared to 173 deaths from COVID-19, with the former figure understood to be a major undercount.

Fiscal and societal problems are both down ultimately to how the political system has dealt with this crisis. If it was a homework assignment, the answers of this government, and other states in the West, would be marked with a straight F! Confusion reigns supreme, where Boris Johnson on a Saturday advocates for primary school pupils to head back to school first thing Monday, but less than 24 hours later, broadcast nationwide the start of another lockdown period, the third in a year. Confidence in the system from its citizens has dampened, with trust at its lowest in many years. Not even the Chancellor’s spending spree could buy that!

The leadership of the United States has been absent, with conflicting messages on wearing masks, on social distancing, on vaccinations and many other issues. The attention of its former Commander in Chief Trump was more focused on riling up his base of far-right supporters and white supremacists with outright lies and conspiracy theories, such that it all came to a head in the first week of January with the storming of the US Capitol.

The symptoms are severe enough in the West that a new leader in the White House will not sort this fiasco out, for the system of Capitalism has been well and truly found out. Some commentators no longer articulate arguments for how great Capitalism is but rather defend it as the best of that which is out there. Capitalism is on life support and a new system needs to be found, a new world order is required.

Although it might look like we have to stick it out with this system for years to come, there is an alternative system that has been missing in action for a hundred years. A system that would establish a new order, which puts people above politics, which upholds truth over falsehood and prioritises the needs of all the people, not the luxuries of the wealthy. The appetite for this change is clear throughout the world.

It is our duty as Muslims to seize this opportunity and offer an alternative vision to the peoples of the world. We have after all as our guidance the words of Allah (swt), the Creator of this world and all its connected systems, and the actions of RasulAllah (saw). Through this we have the Islamic ideology, that contains the political, economic and social solutions which the world yearns for. It is our responsibility as the Muslim Ummah to step forward and work towards establishing Islam’s leadership through the vehicle of Khilafah with the starting point being the Muslim world insha’Allah.

“You are the best nation produced [as an example] for mankind. You enjoin what is right and forbid what is wrong and believe in Allah.” [TMQ Surah Aal-i-’Imran 3:110]