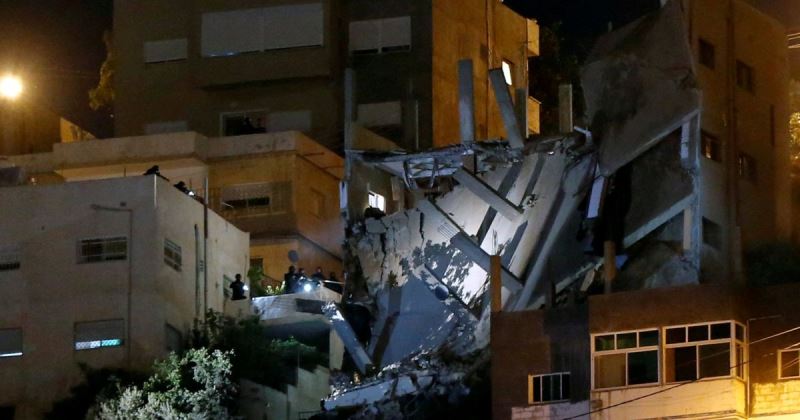 We have followed with great sorrow and sadness the painful events that took place in Al-Salt, the pride and dignity, and the spilling of the forbidden blood of soldiers and civilians that Allah (swt) warned from (violating) in the verse:

As we follow these events we want to emphasize a set of points:

First: Islam forbade the killing of the soul, except by right, Allah (swt) says:

“And do not kill the soul which Allah has forbidden, except by right”

And He (swt) warned Muslims (of the punishment) for killing each other, the Prophet ﷺ said in the Farewell Hajj: «وَيْلَكُمْ لا تَرْجِعُوا بَعْدِي كُفَّارًا يَضْرِبُ بَعْضُكُمْ رِقَابَ بَعْضٍ»، “Woe to you! Don’t turn back as unbelievers after me by striking the necks of one another.”

And we care for every drop of Muslim blood, of soldiers and civilians, due to saying of the Prophet : «مَنْ أَشَارَ إِلَى أَخِيهِ بِحَدِيدَةٍ فَإِنَّ الْمَلَائِكَةَ تَلْعَنُهُ حَتَّى يَدَعَهُ وَإِنْ كَانَ أَخَاهُ لِأَبِيهِ وَأُمِّهِ». “He who pointed a weapon towards his brother the angels invoke curse upon him even if he is his real brother so long as he does not abandon it (the pointing of weapon towards one’s brother Muslim)”

Second: We have warned the regime in the previous Karak events and stated: After the bloodshed of the sacred soldiers and civilians in Karak, of the free, which would not have been spilt if it wasn’t for the policies of the regime in Jordan, which has been suppressing and arresting the Dawah carriers and enlightened thinkers, and fights them in mosques and closes platforms for them. And persecutes them by all means, and even clamps down on scholars and intimidates them, so their voices are no longer heard or their opinion are not known.

They are the ones who see the military as the hope of the Ummah to change its reality and they are where the victory lies and are the custodians of its glory. By them the sanctities are liberated and honour is protected, because they are from the Ummah and work for it. It is expected in origin that the blood of the military men and the blood of the brave soldiers is spilled, but not in Karak or in any of our cities and towns, but in the positions and areas of real men and pride, and on the fronts of jihad to liberate Al-Aqsa and the Gates of Al-Quds (Jerusalem).

The regime disregarded this and continued the gagging policy, arresting the free, and the Dawah carriers, and putting them in prison, and even chasing every voice that accounts corruption on websites. The recent harassment was the closure of the Media Office of Hizb ut Tahrir / Wilayah of Jordan’s Facebook page. Will the regime learn the lesson and know that suppressing and arresting the Dawah carriers and enlightened thinkers, fighting them in mosques, closing platforms in their faces, and pursuing them in every way, and harassing and intimidating the scholars are a prevention of the good they carry. They follow the path of the Messenger of Allah ﷺ to bring change, they do not carry weapons, and do not terrorize the harmless. Their voices are no longer heard or their opinion are not known.

Third: The exploitation of some of the deviant voices that cheaply attempt to link Islam and its ideas to what happened in Al-Salt- to use the events in the fight against Islam, against the doctrine and rules- is only a continuation of an exposed series led by America to link Islam to terrorism, fundamentalism and extremism. These voices are only cheap tools by their operators, and will not be able – with the help of Allah – to obliterate the truth of Islam, the Deen of justice and mercy, which Allah (swt) approved for all mankind, and which its Prophet ﷺ is described as a mercy, Allah (swt) says:

“And We have not sent you, [O Muhammad], except as a mercy to the worlds”

All that Muhammad ﷺ has brought is a mercy for humankind, and adherence to the Ahkaam of Islam and its application as ordered by the Allah (swt) is the real mercy. And we say to them the words of Allah (swt):

“They want to extinguish the light of Allah with their mouths, but Allah will perfect His light, although the disbelievers dislike it * It is He who sent His Messenger with guidance and the religion of truth to manifest it over all religion, although those who associate others with Allah dislike it.”

We in Hizb ut Tahrir/ Wilayah of Jordan call the noble people of Jordan and every wise person who cares for the Muslim blood from military men and civilians, and warn them against the tribal prejudices promoted by some, and call them to condemn those who call for this and who mobilize people on its basis: He ﷺ said, «مَنْ دَعَا بِدَعْوَى الْجَاهِلِيَّةِ فَهُوَ مِنْ جُثَا جَهَنَّمَ قَالُوا يَا رَسُولَ اللَّهِ وَإِنْ صَامَ وَصَلَّى قَالَ وَإِنْ صَامَ وَصَلَّى وَزَعَمَ أَنَّهُ مُسْلِمٌ» “Whoever calls for the call of Ignorance (asabiyah) he will be from those who kneel in Hellfire. They said: “O Messenger of Allah, even if he fasts and prays, He ﷺ said: even if he fasts and prays, and he claims to be a Muslim.” He ﷺ said: «دَعُوهَا فَإِنَّهَا مُنْتِنَةٌ» “Leave it, it is rotten.”

We also urge you to rush to bring back the system of Islam to the reality of life, which the Lord of the Worlds has accepted for all humanity; it stops the spilling of blood and the protects honour. Only the Khilafah Rashidah (rightly guided Caliphate) on the method of Prophethood will put to rest the crimes and corruption practiced by the capitalist Kafir countries in our land, which we invite you to work with us for the sake of its re-establishment, and it will be established soon, Allah willing, it is the promise of Allah and the glad-tiding of the Messenger ﷺ.

“And Allah is predominant over His affair, but most of the people do not know”