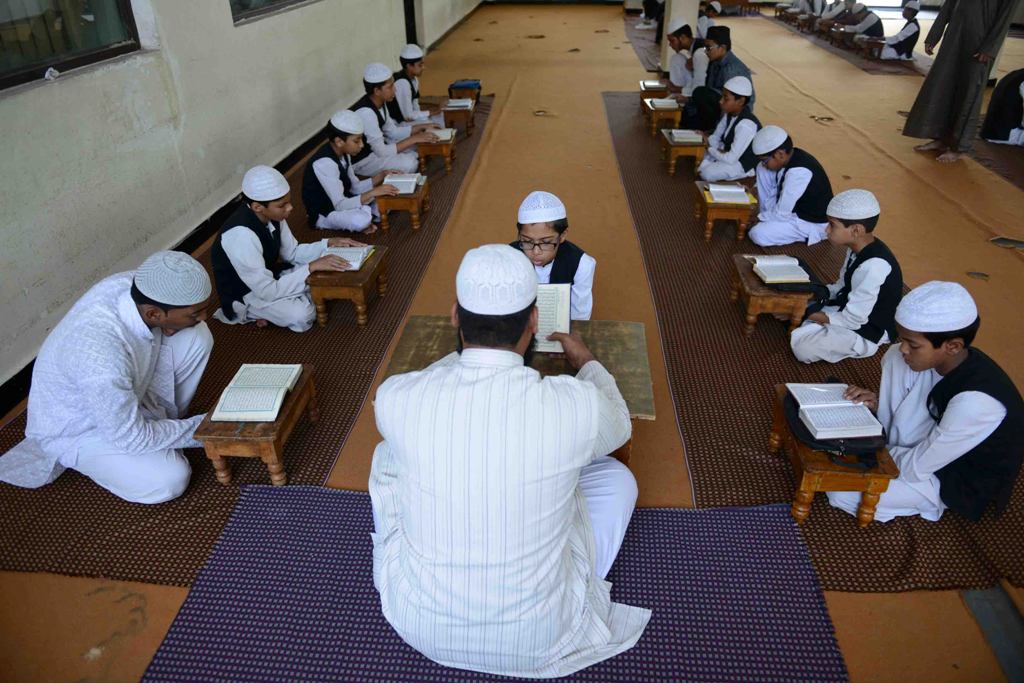 The Assam Assembly in India on Wednesday (30.12.2020) passed a bill to convert government-run madrasas to regular schools under the state board.

According to the bill, the contents of which were made public by Sarma earlier, theological courses that are taught in government-aided madrasas will be stopped from April next year, and the teachers, who were imparting lessons on religious sciences such as ‘Fiqh/Aqaid’ (sacred law) will now be trained to teach general subjects. (The print)

Disbelievers do not abide by a single principle when it comes to attack Islam. At some times, they would claim to abide by the principles to attack Islam. While at the other times, they would deviate from the principles to attack Islam. The claim of India’s Assam government to abide by secular laws in shutting down the government aided madrasas is one such deception to attack of Islam. As for the conversion of Sanskrit tols into ancient research centers (according to the bill), this would only benefit for their notion of ancient Indian civilization with its upgradation into research centers. Accordingly, the real target under this secular law is government aided madrasas. Previously, Assam’s ruling BJP party is known to have supported the center’s Citizenship Amendment Act (CAA) that excluded Muslims exclusively from acquiring citizenship. With several BJP ruled states expressing their intent to enact laws against the presumed ‘love jihad’ following Madhya Pradesh and Uttar Pradesh, Assam government also announced its plan to propose similar laws. All these affirm that the disbelievers would abide and deviate from their secular principles, at least in their interpretations, to attack Islam due to their hatred towards Islam and Muslims. There is more to reflect upon this for Muslims in India:

Firstly, Secularism can never be the protector of Islam, not even in its spiritual sense. When religious based BJP party ascended to the power, calls were raised amongst Muslims to bring back the secular government with a hope that secularism could favor Islam and Muslims. And here the madrasa abolition law was enacted with a claim to uphold secularism as said by the Education Minister Himanta Biswa Sarma, “Madrassas teach theology as a subject. If only Arabic is taught, no issue would have been there. But, as a government we cannot allow teaching of the Quran on public funding.” And it may not be a surprise if the central government enacts similar laws to stop funding other state madrasas also as these madrasas are being funded under the ‘Scheme to Provide Quality Education in Madrasas’ (SPQEM).

Secondly, secularism can only allow Islamic teachings in a way to make Islam compatible to kufr secular laws. Obviously, it does not promote teaching Islam as a whole that includes matters related to governing the life affairs based on Islam such as Islamic ruling system, economic system, social system and others. Consequently, Secular governments fund the madrasas only to make them more aligned towards secularism under the guise of qualitative improvement and modernization by introducing other subjects such as English, Hindi, Science, Mathematics and others. In reality, Islam is a comprehensive ideology revealed by our creator that cannot be confined to spiritual matters as dictated by the secular government.

Finally, Kufr laws can never extinguish the light of Islam as Allah has promised to protect this Deen, يُرِيدُونَ لِيُطْفِؤُوا نُورَ اللَّهِ بِأَفْوَاهِهِمْ وَاللَّهُ مُتِمُّ نُورِهِ وَلَوْ كَرِهَ الْكَافِرُونَ “They want to extinguish the light of Allah with their mouths, but Allah will perfect His light, although the disbelievers dislike it”. [61:8]

However, Muslims are commanded not confine Islam only to selective matters such as Ibada, Akhlaq, marriages, divorce and inheritance as dictated by the secular government. Rather, Muslims are commanded to enter Islam completely, whose first step is to know Islam as whole as taught by the Islamic education system under the Khilafah (Caliphate) state. With the absence of Khilafah, it is more deserving to call for its return, instead of appealing to the secular courts, for Khilafah is a shield that protects Islam and Muslims as Prophet ﷺ said, «إِنَّمَا الْإِمَامُ جُنَّةٌ يُقَاتَلُ مِنْ وَرَائِهِ وَيُتَّقَى بِهِ» “Verily, Imam (Khilafah) is a shield, behind whom you fight and you protect yourself with” [Muslim].