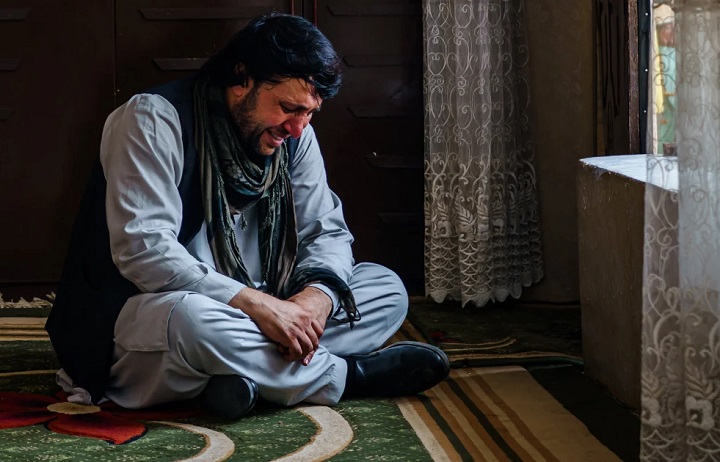 The Pentagon has recently declared that the US drone strike in Kabul on August 29th that killed 10 innocent civilians, including women and children, was a regrettable mistake but was not a misconduct nor violation of rule. The attack took place near a residential area near Kabul Airport. A car suspected to be belonging to ISIS was struck along with seven children and their family members, including Zemarai Ahmadi, an employee of a US non-profit organization who also had applied to seek asylum in the US. [Associated Press, November 4]

Comment:
After 20 years of terror in Afghanistan, the US carried out a terrorist attack even in the last stages of its troops’ withdrawal in which no one was killed other than a father of a family along with his family members – all the victims were women and children. However, the State of Terror did not only commit that brutal crime but has once again wrenched the hearts and sentiments of Muslims with the Department of Defense declaring that they have not violated any rule during the attack.

The world should have recognized this State of Terror who speaks of the advocacy of human rights and women’s rights to the world, especially to the Islamic world, while, its core policy is based on terror and genocide. The massacre of 100 million Indigenous Americans; bombardment of the German city of Dresden in World War II that resulted in the killings of more than 200,000 people; the nuclear bombing of Hiroshima and Nagasaki in World War II, resulting in immediate killing of 220,000 people with hundreds of thousands plagued with various sickness in the aftermath of the disaster; the US-Vietnam War that left about 3 million Vietnamese dead during the 16-year war where the US forces were dropping 500,000 tons of bombs a year – yet they burnt humans, animals and forests with Napalm. Besides, millions of Muslims, including women and children were killed in the US-led wars both in Afghanistan and Iraq, causing millions to get displaced from their homes. The US even dropped the mother of all bombs (MOAB) in Afghanistan. So, the human crimes of this State of Terror have been and/or will be countless.

Lieutenant General D. Said, the Inspector General of the Department of the US Air Force who led the investigation stated: that he found no “violations of law or of the law of war.” He shamelessly told the reporters that this was not a criminal conduct or negligence, but those directly involved in the attack actually believed that there was an imminent threat. Therefore, he doesn’t recommend any disciplinary action.

It should be reiterated that the betrayal of the rulers of the Islamic lands and the political strife among the Muslims is the main reason for the continuation of US and Western crimes because the Muslims don’t have an Islamic State, established through allegiance of powerful Muslims – that would implement Islam on the Ummah and carry it to the world through Dawah and Jihad. Moreover, the reason why the Muslims have not yet restored such an Islamic State after its collapse is simply because of their incorrect interpretation of the purpose of life – the Muslims, instead of satisfying Allah (swt) to succeed the Ibtilah (test) in this world, have resorted to goals that other nations have already pursued, such as obtaining pleasure in the world which is the main purpose of life for the Western world, or escaping from suffering and hardship which is the main purpose of life defined by religions in India and China. Such ideas and purposes of life seem to have put ‘Wahn: love of the world and dislike of death’ in the hearts of Muslims, making them follow the footsteps of the past nations who had been cursed and punished by Allah (swt) simply because of such ideas.

Therefore, we must come to our senses as one Ummah! We must re-define the Qibla of our hope; we must seek hope from Allah (swt) instead of the US, China, Europe and the United Nations; we must realize to fulfil our duty based on Islam; we must remove Wahn from our hearts; we must hold our traitorous and wicked rulers accountable and even oust them from power by overthrowing their non-Islamic governments, and instead we must establish an Islamic State (Caliphate) based on the method of Prophethood. Otherwise, we will see such an atrocious situation keep continuing because we Muslims, as one Ummah, have a convention with Allah (swt), a convention to implement Islam, proclaim Islam over all religions and carry Islam to the entire humanity – a vital affair we have unfortunately forgotten so far.

“It is He Who has sent His Messenger with Guidance and the Religion of Truth, that he may proclaim it over all religion, even though the Pagans may detest (it).” [At-Tawba: 33]