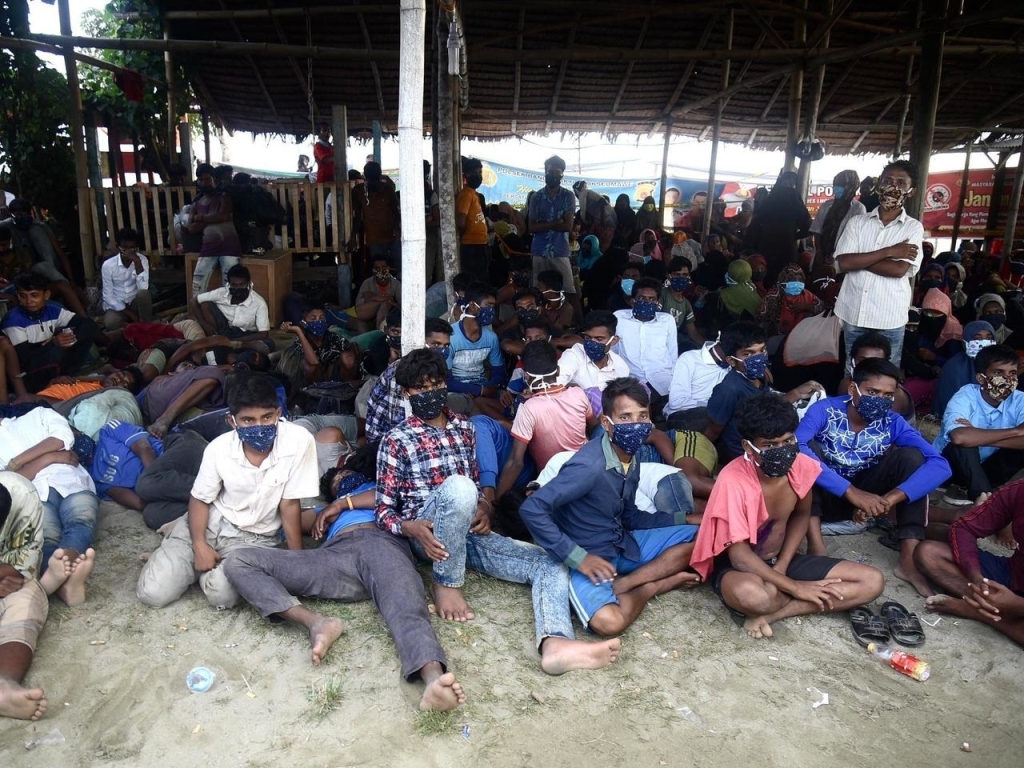 On the 7th September, nearly 300 Rohingya refugees came ashore in Indonesia after being at sea for almost 6 months. The group included 181 women and 14 children and were rescued by local Muslims on Sumatra’s northern coast. The refugees set sail from southern Bangladesh bound for Malaysia, hoping to receive sanctuary in the Muslim-majority country after facing persecution in Myanmar, but were pushed away on arrival, under the excuse of border closures due to the coronavirus pandemic. More than 30 of the refugees are thought to have died during the voyage. The day following this incident, news emerged of video testimony from two soldiers who deserted the Myanmar army. They gave evidence confirming the already known fact of the Myanmar military’s intent to eradicate the Rohingya Muslims in a genocide campaign. The soldiers described indiscriminate shooting at civilians, executions, mass burials, village obliterations and rape against Rohingya by the Myanmar army, as well as directives from their superiors of: “Shoot all you see and all you hear!”, “kill all you see, whether children or adults”, and instructions to “exterminate” the Rohingya.

Despite the horrific scale of persecution that the Rohingya Muslims have faced in Myanmar and continue to face, the nationalistic Muslim regimes in the region continue to push them away, or place them in squalid inhabitable disease-ridden camps, or criminalise and even imprison these helpless refugees. It is the appalling conditions of Cox’s Bazaar refugee camp in Bangladesh and the deprivation of all rights in the country which drives hundreds of Rohingya to risk their life to seek sanctuary in Malaysia or other Muslim lands. It is reported that 800 Rohingya left Bangladesh this year alone, bound for Malaysia, and dozens are believed to have died during their journey. On reaching Malaysia, instead of being received as their Muslim brothers and sisters who deserve care and protection, the heartless Malaysian regime, blinded by its toxic concept of preserving national borders – pushes back these desperate Muslims to drown at sea or die from starvation. The tragic plight of the Rohingya Muslims would surely break the heart of any decent, humane individual, and bring a realisation of the desperate need that these refugees have for shelter and protection. However, not so for the regimes of the Muslim world. Malaysian authorities have stated that they have turned back 22 boats filled with Rohingya this year alone, while in Indonesia this June, the local authority in Aceh refused to give sanctuary to around 100 Rohingya Muslims who were drifting near their shore after enduring a 4 month journey during which they were beaten by traffickers and forced to drink their own urine to stay alive. It was local Muslims in Aceh, furious at the stance and inhumanity of their local officials, who rescued their Muslim brothers and sisters from the boat. With the most recent arrival of Rohingya refugees in Indonesia, it was also local Muslims who donated food and clothing to them. One resident, Aisyah, told Reuters: “We’re concerned about their condition…They need help in the name of humanity…They’re human beings like us.” This is the clear distinction of actions fuelled by Iman and Islam which exemplify humanitarianism and Islamic brotherhood, compared to the inhumane heartless actions of man-made systems driven by selfish nationalistic interests!

Not only have these despicable nationalistic regimes abandoned the Rohingya to their plight, some, such as the Malaysian government, have fuelled xenophobic hate-filled-speech against those who manage to enter their country, as well as arresting and detaining hundreds in unsanitary prison-like conditions, subjecting them to a new chapter of persecution and terror. Almost 600 undocumented migrants were arrested in Malaysia in the first weekend of May this year, while this June, a court in the country sentenced 31 Rohingya men and 9 Rohingya women to 7 months in prison for violating Malaysia’s immigration act. Some of the men were even sentenced to caning, although this punishment was later overturned. Rohingya children too have been charged and face jail terms. The Malaysian government has even passed new regulations to prevent house owners renting their properties to migrant communities. Such is the intense negativity created by the regime against the Rohingya, that some aid workers now fear providing the refugees with food and other necessities, due to receiving a back-clash from government officials.

These regimes of the Muslim lands have been stripped of all humanity under their nationalistic, capitalistic systems. Under their heartless rule, it is a crime to seek sanctuary as desperate and helpless victims of persecution. In truth, it is these regimes and their man-made systems of governance which are the real criminals in the eyes of the Ummah, and others who have humanity, and importantly in the Eyes of Allah (swt), who commands the believers to support and protect their oppressed Muslim brothers and sisters and to give them dignified sanctuary. He (swt) says: فِي الدِّينِ فَعَلَيْكُمُ النَّصْرُ “And if they seek help of you for the religion, then you must help.” [8:72]. The fact that the Rohingya are Muslims means nothing to these regimes who disregard the words of the Prophet ﷺ: «الْمُسْلِمُ أَخُو الْمُسْلِمِ، لَا يَظْلِمُهُ، وَلَا يَخْذُلُهُ» “A Muslim is the brother of a Muslim: he does not oppress him, nor does he abandon him”. And these regimes have treated the Rohingya as worthless beings, while Allah (swt) has defined their life as sacred, as with the life of every believer. The Prophet ﷺ said: » «لزوال الدنيا أهون على الله من قتل مؤمن بغير حق “The wiping away of the world means less to Allah than a Believer to be killed unjustly.” Truly, these conscienceless regimes who have abandoned this Ummah, and view the oppressed Believers with contempt, do not deserve to rule over our lands for a single day! Do we not urgently need the establishment of the System of Allah (swt): the Khilafah based upon the method of the Prophethood, which will fulfil the Command of our Rabb to be the shield and guardian of the Believers, and provide shade for all who are oppressed?!!