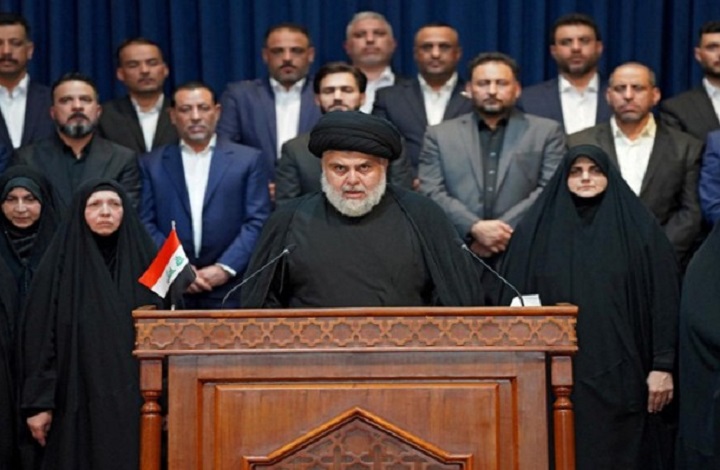 After a struggle, rivalry and strife for more than 7 months, the leader of the Sadrist movement, Muqtada al-Sadr, announced the resignation of the members of his largest parliamentary bloc in the Iraqi parliament, which numbered 73, against the backdrop of the continuation of the Coordination Framework – which includes Shiite political forces as well – obstructing the formation of a majority national government before that.

Ahmed Al-Mutairi, head of the political body of the Sadrist movement, said in a statement received by Shafak News Agency: “The political altruism that Muqtada al-Sadr did by withdrawing from the political process and leaving the seats of his representatives to his opponents from other politicians is a sacrifice for Iraq, as he made himself the holy ram of Ismail.”

With this decision, and after the Speaker of the House of Representatives approved this resignation, the country entered a new political chaos, and in the face of all speculations that do not serve the interests of the Iraqi person, on the contrary, only the helpless person pays the price for it.

First: The leader of the Sadrist movement, Muqtada al-Sadr, is known to be volatile, and his history is full of that. He announced a sit-in in the Green Zone on 27/3/ 2016 to pressure al-Abadi in his cabinet formation, and then broke up his sit-in on March 31 after al-Abadi submitted his new cabinet formation which is not different from the previous one, and he announced a boycott of the elections in 2013, then retracted that, this is the same in 2021 when he retracted his decision as well. Such a chaotic, non-ideological figure is difficult to predict and be certain of his decisions, and remain firm on them. He may retreat and enter the political process after negotiating, and may be satisfied with certain gains, this is the first scenario.

Second: The Sadrist movement’s leader’s reliance on the failure of the Coordination Framework to form the government, and then the parliament dissolves itself, and Al-Kazemi’s government remains, and go to another early elections, in which Muqtada al-Sadr aspires to win seats through which the third bloc is abolished, and this is the second scenario.

Third: The success of the Framework in forming the government, and this is difficult without the Sadrist movement’s blessing, because they realize the ability of the Sadrist movement to move the street, and the extent of the Iraqi street’s discontent, and their non-acceptance of these rejected forms. This scenario is the most dangerous scenario, as it may lead the country into chaos and great fighting, whose fire burns the innocents before the criminals and the corrupt.

O Muslims in Iraq: Since the occupation of Iraq in 2003, and the suffering and problems that followed that have permeated all walks of life, and whenever you are near salvation, the occupier surprises you with a new game of its games. In every election round, you announce your remorse and regret, that you were deceived and that you will not vote after that. Then the occupier brings out his ropes by which he drags you again, so you obey his rope and participate voluntarily! The rope of sectarianism, the rope of nationalism, the rope of the fittest, and the rope of the independents, they are all false and pitfalls, the purpose of which is to make the elections successful and save the political process drawn up by the American occupier from collapsing. This is what you have experienced in reality. The state of the country since its occupation until now has gone from bad to worse, and whenever a bad cycle passes, a worse cycle follows.

O Muslims in Iraq: Know for sure that no politician cares about you, whether he claims patriotism, sectarianism or independence. Everyone works only for his personal and partisan interests, and the satisfaction of his colonial masters. The conditions you live in today, is best proof of this. For more than 7 months for their early elections according to their claim, everyone is immersed in achieving their interests, while disrupting the interests of the entire people, under the pretext of approving the budget, which is not approved until after the formation of the government.

The salvation from all this suffering, and the achievement of a comfortable life, is not to by gathering around As-Sadr, or the framework, nor around a partisan, or an independent candidate. As these are all pieces on a chessboard drawn by the occupier, which he moves as he wants, all of them declare their adherence to the constitution established by this occupier, which is the root of the disease and the cause of affliction. This is the natural state of the Ummah when it strays from the Shariah. It become weak and nations will summon each other to attack it and plunder its resources, and the corrupt roam in it and the Ruwayibidah (the ignorant) decides for it.

It is your duty to radically change the entire current political system, throw the political process and its men away, establish a political system whose constitution is derived from the Book of Allah (swt) and the Sunnah of His Messenger (saw), give pledge (bayah) to the ruler to implement it and account him accordingly. Then you will be removed from the wrath of Allah and the circle of loss and hardship of living to the pleasure of Allah (swt) and the circle of guidance, and a happy life.

So, roll up your sleeves and seriously work to lift the oppression from your necks and obey the words of the Messenger of Allah (saw):

“If the people see an evildoer and do not stop him, soon Allah will send His punishment upon them all.”