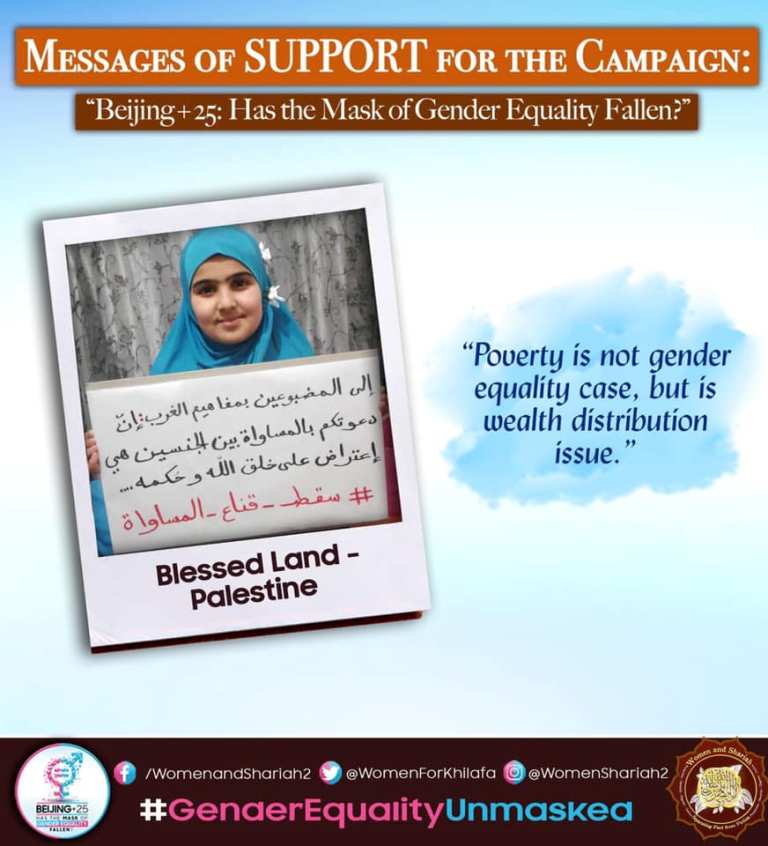 On Saturday 4th April 2020, the Women’s Section in the Central Media Office of Hizb ut Tahrir is to host an international online conference entitled, “Beijing+25: Has the Mask of Gender Equality Fallen?” The event will include speeches from the female members of Hizb ut Tahrir from Palestine, Turkey, Indonesia, Tunisia, Australia, Lebanon and Britain, and will be streamed to an international audience in English, Arabic, Turkish and Indonesian. The conference is the culmination of a three-week global campaign on the subject which enjoyed extensive international support.

The year 2020 marks the 25th anniversary of the Beijing Declaration and Platform for Action, which was an extensive document produced by the United Nations at its fourth World Conference on Women in September 1995, in Beijing, China. It was hailed as the most visionary agenda for the empowerment of women and girls internationally. Its stated aim was to advance the rights and improve the lives of women globally through the establishment of ‘Gender Equality’ in all spheres of life. The declaration was adopted by 189 countries, including the majority of governments in the Muslim world, who agreed to implement its commitments within their lands. Over many decades, the concept of ‘Gender Equality’ contained within the declaration and other international women’s agreements was promoted heavily within nations and formed the basis of many national policies and laws regarding women’s rights, leading to the abolishment of many Islam social and family rulings. However, 25 years on from the Beijing Platform for Action and its intensive agenda to further the cause of gender equality globally, the promises of empowerment and improvement to the lives of women has not materialized for the masses of ordinary women in the Muslim lands, nor world-wide. In fact, within many countries, the scale of violence, poverty, insecurity, exploitation, sexual trafficking, injustice and oppression that women face, as well as the state of education and healthcare within their lands has worsened. Furthermore, attempts to equalize the roles of the genders has undoubtedly brought women further strain and misery, including having to be breadwinners for their families, as well as causing tensions within marriages due to disputes over responsibilities, alongside devaluing women’s unique role as mothers, leading to the neglect of the rights of children.

This important conference will therefore seek to highlight the erroneous nature of the dominant narratives related to ‘Gender Equality’ and its claims of advancing women’s rights and wellbeing, and the progress of nations. It will explain the reasons for the failure of gender equality policies and laws in improving the lives of women, as well as clarify the true ideological and systemic root causes of the multitude of problems facing women today. It will also address the wider ideological context and aims of the global propagation of feminism and gender equality, alongside exposing the insidious agenda of the Beijing Declaration and other international women’s agreements to reform and abolish the Islamic social and family laws within the Muslim lands, as well as the actions undertaken by secular governments in the region to support the fulfillment of this agenda, and the detrimental impact it has had on women, the family unit and society. The conference will also highlight the flaws and failures of the strategic objectives of the declaration in its various areas of concern, including education and the training of women, women and the economy and women and armed conflict. And importantly, the event will illustrate how Islam and its political system, the Khilafah (Caliphate) based on the method of the Prophethood, embody a unique and comprehensive blueprint of detailed principles, laws and systems to raise the status of women within a society, secure their rights, protect them from harm, and elevate their standard of living, including ensuring them access to high-quality education and health care as well as achieving true progress within a state.