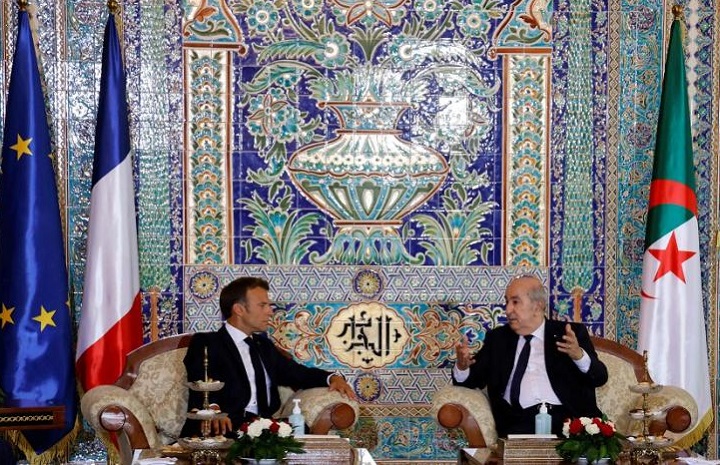 Details:
France’s Macron asks Algeria to Look Beyond “Painful Common Past”
US has made Sri Lanka a Source of Conflict between China and India

France’s Macron asks Algeria to Look Beyond “Painful Common Past”

This week French President Emmanuel Macron began a three-day visit to its former colony Algeria, characterising France’s brutal occupation of Algeria as being a “common past”. According to Reuters on Thursday:

“We have a complex, painful common past. And it has at times prevented us from looking at the future,” Macron said after meeting Algerian counterpart President Abdelmadjid Tebboune.

Macron has chosen these words carefully knowing that he can never acknowledge French responsibility for its historic crimes. According to Al Jazeera:

Macron has attempted multiple times to turn the page with its former colony. In 2017, before his election, he described French actions during the 1954-62 war that killed hundreds of thousands of Algerians as a “crime against humanity”.

The declaration won him popularity in Algeria but was politically controversial in France, which is home to more than four million people of Algerian origin.

However, he provoked a storm in Algeria last year when he ruled out issuing an official apology and suggested Algerian national identity did not exist before French rule.

Western imperialism is an inevitable component of its Capitalist ideology. Western Empiricism views religion as a matter of speculation, and so the Capitalist creed separates religion from life; all that can be known with certainty is this world alone. Religion is relegated to a personal matter and material benefit alone serves as the public goal in life. This material imperative not only results in fierce rivalry and exploitation within Capitalist countries. When coupled with the Westphalian nation-state concept of fixed borders, this translates into a powerful imperialist drive that seeks to subjugate and exploit all other peoples of the world.

Capitalist imperialism didn’t end with the independence granted to most countries in the last century; it only transformed, continuing using new styles. According to The Financial Times:

The French president is accompanied not only by his ministers of finance, interior, defence and foreign affairs, but also by a delegation of about 90 people that includes telecoms billionaire Xavier Niel, a French Olympic boxer Sarah Ourahmoune and novelist Kamel Daoud. The delegation’s varied composition points to a focus on soft power to heal tensions and renew a complex relationship often bristling with emotion yet underpinned by strong economic ties and the presence of a large Algerian diaspora in France.

This large delegation is because France seeks to continue to benefit strongly from its former colonies. Algeria is an important energy producer and Europe at this time is in an energy crisis due to the war in Ukraine, even though France denies that this is the reason for the visit. According to Al Jazeera:

European nations are looking to Algeria — Africa’s biggest gas exporter with direct pipelines to Spain and Italy — to end their dependence on Russian hydrocarbons.

No energy supply or other big trade contract is expected during Macron’s trip, but the focus will be on future economic relations.

Algeria’s status as a key gas supplier for Europe has been enhanced amid fears that Russia could cut off supplies. The North African country is the EU’s third-largest gas supplier, representing 8.2% of the 27-nation bloc’s imports in 2021.

Algiers has already started increasing its gas supplies to the continent, mostly via two pipelines that connect the country to Italy and Spain. It signed a $4 billion gas deal with U.S. group Occidental Petroleum, Italian company Eni and French giant Total.

Western countries will continue to engage in Western imperialism, dominating and exploiting humanity, by any and all styles and means at their disposal. There is no entity in the world today that can oppose them. But with the permission of Allah (swt), the Muslim Ummah shall soon arise and re-establish the Islamic Khilafah (Caliphate) State on the method of the Prophet (saw) that shall unify the lands of the Muslim Ummah, liberate her occupied territories, implement the Islamic Sharia, restore the Islamic way of life, and carry the light of Islam to the entire world. The Khilafah State shall, almost from its inception, join the ranks of the great powers on account of its great size, vast population, immense resources, unparalleled geography and unique Islamic ideology. The Khilafah State shall seek to contain and calm the other world powers, presenting international public opinion with a powerful alternate model of governance and great power conduct, as it did previously, when it was the dominant power on the globe for a thousand years. Allah (swt) says in the Noble Qur’an:

“You are the best community ever raised for humanity—you encourage good, forbid evil, and believe in Allah. Had the People of the Book believed, it would have been better for them. Some of them are faithful, but most are rebellious.”[Aal-i Imran: 110].

This week, the Chinese ship Yuan Wang 5 left Sri Lanka after a controversial visit. According to Reuters:

A Chinese military survey ship that docked at Sri Lanka’s Chinese-built port of Hambantota despite opposition from neighbouring India left on Monday after a week-long stay, the port company told Reuters.

Analysts say the Yuan Wang 5 is among a group of Chinese ships that monitor satellite, rocket and intercontinental ballistic missile launches. India, Sri Lanka’s northern neighbour, fears China could use the port as a military base.

Sri Lanka, facing its worst economic crisis in decades and in need of financial support from both China and India, had delayed the ship’s arrival after India raised its concerns but gave in to Chinese demands later.

According to a previous article at The Washington Post:

Since July, the Yuan Wang 5 has been sailing from China to Hambantota port on the southern tip of Sri Lanka after Sri Lankan officials approved a stop there for “replenishment.” But Indian and U.S. officials have strongly pressured the Sri Lanka government to revoke access to the port, infuriating their Chinese counterparts.

Caught in the middle, Sri Lanka’s Foreign Ministry said in a statement Monday that it formally requested that China postpone the visit while adding that it “wished to reaffirm the enduring friendship and excellent relations between Sri Lanka and China.”

Analysis by The Interpreter at the Lowy Institute reveals that the US has falsely portrayed Chinese intentions in Sri Lanka, and points to the history of the problem:

Still, while accusations of nefarious Chinese designs on Hambantota might be bogus, they are widely believed, and China has not done itself any favours with the PLA visit this month, which plays into concerns that it is trying to militarise the island, handing Delhi a propaganda victory.

In recent years China and India have been engaged in a tug of war for influence in Sri Lanka. China held clout during the presidency of Mahinda Rajapaksa from 2005 to 2015; then it lost ground to Delhi under his successor; but regained influence when Mahinda’s brother, Gotabaya, took the helm in 2019.

Now the tables have turned once again. Gotabaya and his brother both resigned from government this year, depriving China of its best friends in Colombo. India has moved in to alleviate Sri Lanka’s desperate food and fuel shortages with over $3.8 billion of assistance. Beijing, by contrast, has provided a relatively paltry $74 million.

Ever since so-called independence from colonial rule, Sri Lanka has remained caught in great power conflicts. During the last century, this was between the former colonial power, Britain, and the new colonial power, the United States. The Americans exploited the Sinhalese majority in Sri Lanka to overthrow the post-independence rulers that had been installed to continue British interests in Sri Lanka. Britain retaliated bitterly with a decades-long Tamil insurgency against the American-backed Sinhalese regime. That insurgency was finally brought to an end by the American agent Mahinda Rajapaksa about 15 years ago. The US achieved that by pushing Rajapaksa towards China, so that he could be strengthened by Chinese support. But once India turned to America with Prime Minister Narendra Modi’s election win in 2014, the Americans abandoned Rajapaksa to Indian assertiveness. So instead of Sri Lanka being caught between Britain and America, Sri Lanka is now caught between India and China. America is not looking to end China’s influence in such countries; instead America is intending to make them points of ongoing conflict in order to consume China in its immediate neighbourhood, so preventing China from threatening America directly.

The Western powers seek only instability and chaos in the world. But Islam seeks good for all humanity. With the permission of Allah (swt), the Muslim Ummah shall soon arise and overthrow the agent rulers that have been imposed upon it, and instead pledge obedience to sincere and capable leadership that shall be an agent to none other than Allah and His Messenger (saw) and safeguard the true interests of the Muslim Ummah and all of humanity.