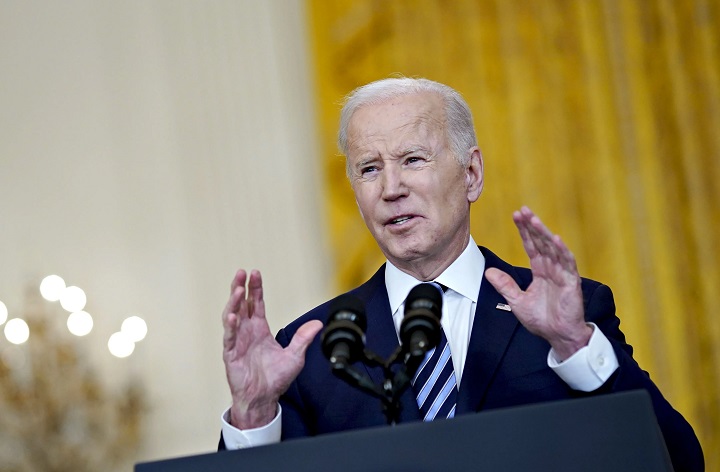 After months of baiting by America, Russian President Vladimir Putin finally took the decision this week to invade Ukraine after declaring Russian recognition for Ukraine’s eastern provinces as independent states. But the practical American response has been controlled, limited and carefully calibrated despite harsh rhetoric. According to reporting at CNN:

President Joe Biden on Thursday unveiled harsh new sanctions on Russia meant to punish the country for its full-scale invasion of Ukraine, calling out Russian President Vladimir Putin for his aggression even as he acknowledged it would take time for the new measures to alter Putin’s behavior.

“Putin is the aggressor. Putin chose this war. And now he and his country will bear the consequences,” Biden said, laying out a set of measures that will “impose severe cost on the Russian economy, both immediately and over time.”

Biden insisted his threat to directly sanction Putin remains “on the table” and is “not a bluff,” but he didn’t answer when asked why he hasn’t directly sanctioned the Russian president yet.

“It’s going to take time,” Biden said of the effects of the sanctions. “We have to show resolve so he knows what is coming. And so the people of Russia know what he’s brought on them. That’s what this is all about.”…

And Biden announced a new deployment of ground and air forces to NATO’s eastern flank, even as he reiterated US troops would not engage in direct conflict in Ukraine.

“Our forces are not and will not be engaged in the conflict,” he said, addressing the nation from the White House East Room in his first appearance in public since the Russian attack commenced late Wednesday. “Our forces are not going to Europe to fight in Ukraine but defend our NATO allies and reassure those allies in the east.”

There are multiple reasons for the minimalist American response. The invasion of Ukraine actually helps America strengthen its leadership over Europe. France and Germany have been talking increasingly in recent years of developing an alternate to NATO; they have also sought out closer relations with Russia as a balance to America. Europe was also in competition with America for influence in Ukraine; after the Russian invasion, the conflict in Ukraine is now more likely to remain limited to America and Russia only. By entering Ukraine, Russia has also entrapped itself in an ongoing conflict that will be exploited by America to fulfil other demands from Russia, such as with regards to the Russia-China relationship, as well as Russian activities in Muslim countries that America wishes to see conducted in accordance with American objectives, as happened in Syria.

More importantly, American is fundamentally restrained because of the fact that Ukraine is very much within the immediate Russian sphere of influence. America and the West recognise that Russia remains within the ranks of the great powers and there is practically little that other great powers can do to limit a great power acting within its own sphere. The international legalisms based on the idea of Westphalian nation-state sovereignty have little practical significance in such situations. America itself has violated the so-called sovereignty of nation states on multiple occasions in recent decades, most notably within Muslim countries that are very far from America’s immediate neighbourhood.

The world requires a new conception of international relations that is built on the actual reality of the way that the world works, instead of the misleading Westphalian nation state model that is held up as being inviolable except when a great power chooses to violate it. Previous to the European Westphalian settlement of the seventeenth century, it was understood that countries could expand and contract naturally in accordance with their strength and ability. Powerful countries, capable of stronger governance increased their territorial size while failing regimes contracted to conserve their limited energies. Wars were often limited professional engagements while, in many instances, territories were ceded and exchanged through simple treaty negotiations.

With Allah’s permission, the Muslim Ummah shall soon arise and re-establish the Islamic Khilafah (Caliphate) State on the method of the Prophet (saw) that shall unify Muslim lands, liberate its occupied territories, implement the Islamic shariah, restore the Islamic way of life and carry the call for Islam to the entire world. The Khilafah State shall, almost from its inception, join the ranks of the great powers because of its great size, vast population, immense resources, superior geopolitics and unique Islamic ideology. The Khilafah State shall return the world to the peace, stability and prosperity that it enjoyed in the previous thousand years that Islam was dominant in the world. Allah (swt) says in the Noble Qur’an:

“You are the best nation produced for mankind. You enjoin what is right and forbid what is wrong and believe in Allah. If only the People of the Scripture had believed, it would have been better for them. Among them are believers, but most of them are defiantly disobedient.” [Aali-Imran:110].