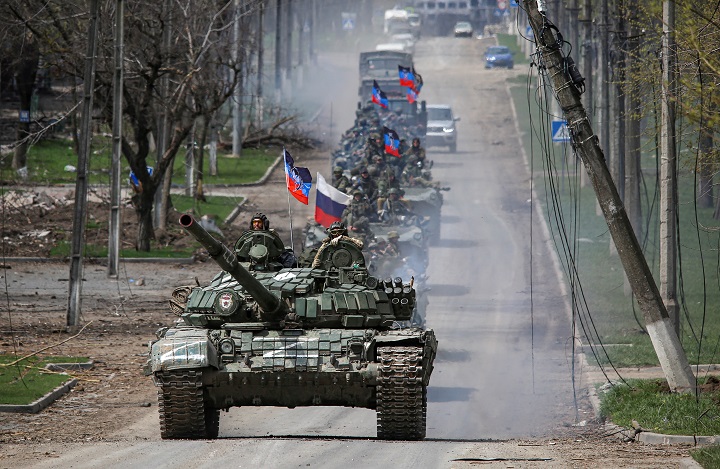 Details:
Battle of Mariuvpol: US Traps Russia in the Eastern Corner of Ukraine
Sri Lanka put on Lifeline by World Bank

Battle of Mariuvpol: US Traps Russia in the Eastern Corner of Ukraine

Russian President Vladimir Putin’s impulsive, ill-prepared offensive against Ukraine has failed. This was to be expected. Putin had only been grandstanding with his massive mobilisations adjacent to Ukrainian territory. But America succeeded in provoking him into actually invading Ukraine. Putin’s illusions of a general victory have been replaced by a more practical and immediate plan, in which the city of Mariupol is key. The Guardian quotes the Ukrainian President’s chief of staff as saying, “The second phase of the war has begun” and adds, ‘The Kremlin is seen as having four objectives in this second phase of its war in Ukraine, the European official said: capturing the Donbas, securing a land bridge to Crimea in which the besieged city of Mariupol is crucial, seizing Kherson oblast to secure a supply of freshwater to Crimea, and capturing additional territory that could be used as a buffer or a bargaining chip in negotiations.’

Meanwhile, America is pouring as much funds and armaments into Ukraine that it can manage. On Thursday, US President Joe Biden announced $800 million additional funding on top of $800 million the previous week in order to “further augment Ukraine’s ability to fight in the east in the Donbas region.” Explaining the current challenge, Biden said, “Now — now we have to accelerate that assistance package to help prepare Ukraine for Russia’s offensive that’s going to be more limited in terms of geography, but not in terms of brutality — not in terms of brutality.” He also spoke of “sending to Congress a supplemental budget request to keep weapons and ammunition flowing without interruption to the brave Ukrainian fighters and to continue to deliver economic assistance to the Ukrainian people.” He also said, “And on top of this, these direct contributions from the United States, we’re facilitating; we’re the outfit facilitating the significant flow of weapons and systems to Ukraine from other Allies and partners around the world, like the S-300 long-range, anti-aircraft systems that Slovakia recently transferred to Ukraine. We are getting them in there.”

It is America’s intent for Russia to be permanently engaged in this corner of Ukraine, in order that the challenges of occupation continue to drain Russia of strength and will. Biden in his statement did not talk of completely liberating Ukraine but limited himself to saying, “He will never succeed in dominating and occupying all of Ukraine.  He will not — that will not happen.”

The disbelieving imperialist Capitalist West seek to maintain their supremacy by entrenching other powers in permanent conflicts. But with the permission of Allah (swt) the Muslim Ummah shall soon arise and re-establish the Islamic Khilafah (Caliphate) State on the method of the Prophet (saw) that shall unify Muslim lands, liberate its occupied territories, implement the Islamic Shariah, restore the Islamic way of life and carry the call for Islam to the entire world. The Khilafah State shall, almost from its inception, join the ranks of the great powers on account of its great size, immense population, vast resources, unparalleled geostrategic location and unique Islamic ideology. The Khilafah State shall confront, contain and calm the other Western powers and return the world to the general state of peace and prosperity that existed for the greater part of a thousand years before the rise of the imperialist disbelieving West.

According to Al Jazeera:

Sri Lanka will receive $300m to $600m from the World Bank over the next four months to buy medicine and other essential items, the country’s finance minister said Friday, as the Indian ocean island suffers its worst economic crisis in decades.

Finance Minister Ali Sabri, who is in Washington to negotiate a rescue package with the International Monetary Fund, said in a video conference that the talks with the IMF might take some time, and that the World Bank has agreed to provide support in the meantime…

Sri Lanka is on the brink of bankruptcy, with nearly $7bn of its total $25bn in foreign debt due for repayment this year. A severe shortage of foreign exchange means the country lacks the money to buy imported goods.

This dire situation of Sri Lanka is a familiar one for Muslims, whose countries are routinely suffering such issues. This week, Pakistan’s new finance minister is also in Washington for negotiations with the IMF, after the previous Imran Khan government committed itself to unsustainable fuel subsidies after the recent worldwide hike in energy prices following the Ukraine war.

The reason resource rich countries such as Sri Lanka and Pakistan are ensnared in financial difficulties is the imperialist-designed international system that they remain part of because the legacy colonial systems still implemented in their countries. Colonialism operated on resource extraction while providing minimal subsistence to the local workforce; in the modern day, we extract resources and export them with our own hands in return for the same minimal subsistence returns in the name of achieving the false goal of an export-oriented economy. Meanwhile, the World Bank and IMF work in partnership to keep us subjugated, the IMF imposing harsh conditionalities and the World Bank ensuring that we have just enough to remain alive so that we can continue to serve our Western masters. But with Allah’s permission, the Islamic Khilafah shall soon be established which shall overthrow the Capitalist world order and replace it with open trade and commerce that shall be truly beneficial for all, as was the case before the West’s rise. Indeed, early Western prosperity was itself a consequence of the benefits of the Islamic economic system and Islamic international trade policies that made Muslim lands a magnet for Western traders and businessmen.