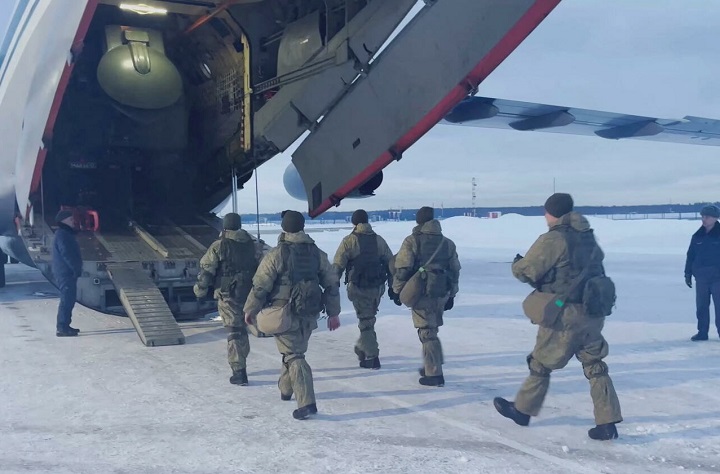 According to reporting by Reuters on Thursday, ‘A Russia-led military bloc began pulling out from Kazakhstan on Thursday after a week-long deployment amid an explosion of unrest during which authorities in the Central Asian nation said the former security chief was suspected of attempting a coup.’ The successful show of strength has been useful for Russia at a time that it is in confrontation with NATO over Ukraine. But it is the Kazakh government that called for Russian assistance. The same Reuters report explains, ‘Kazakh President Kassym-Jomart Tokayev asked for assistance from the Collective Security Treaty Organisation (CSTO) last week after initially peaceful protests, triggered by a sharp increase in car fuel prices, turned violent in many big cities. “Thanks to your arrival, Kazakh military and security forces were able to carry out their immediate task of locating and detaining bandits,” Kazakh Deputy Defence Minister Mukhamedzhan Talasov told CSTO troops at a departure ceremony in Almaty on Thursday, where they stood with their respective flags. The Russian group was the most numerous.’ Foreign forces not only enabled the detention of almost 10,000 protesters but also supported President Tokayev in moving against other elements within the Kazakhstan government and ruling elite. Former president Nursultan Nazarbayev has apparently been side lined, and senior security officials have been dismissed and later charged with treason. Former head of state security Karim Masimov is being investigated on suspicion of an attempted coup.

The protests in Kazakhstan were a result of general dissatisfaction with the government, triggered by rising energy prices, which is extraordinary given Kazakhstan’s substantial resource wealth. According to the Associated Press, ‘Of the five Central Asian republics that gained independence following the dissolution of the Soviet Union, Kazakhstan is by far the largest and the wealthiest. It spans a territory the size of Western Europe and sits atop colossal reserves of oil, natural gas, uranium and precious metals. But while Kazakhstan’s natural riches have helped it cultivate a solid middle class, as well as a substantial cohort of ultrarich tycoons, financial hardship is widespread. The average national monthly salary is just under $600. The banking system has fallen prey to deep crises precipitated by non-performing loans. As in much of the rest of the region, petty corruption is rampant. The rally that set off the latest crisis took place in the dusty western oil town of Zhanaozen. Resentments have long festered in the area over a sense that the region’s energy riches haven’t been fairly spread among the local population. In 2011, police shot dead at least 15 people in the city who were protesting in support of oil workers dismissed after a strike. When prices for the liquified petroleum gas most people in the area use to power their cars doubled overnight Saturday, patience snapped. Residents in nearby cities quickly joined in and within days large protests had spread to the rest of the country.’

Like the rest of the Muslim world, Kazakhstan won only nominal independence; its rulers remain agents to foreign disbelievers, depending on them to sustain their positions and their governance. But the Muslim Ummah is arising from its deep slumber, increasingly aware of the evil of their agent ruling classes and the exploitative injustice of the Western systems of government that they implement upon the Ummah in contradiction to the Islamic Shariah. With Allah’s permission, the Muslim Ummah shall soon overthrow these rulers and their foreign systems of disbelief and in their place re-establish the Islamic Khilafah (Caliphate) State on the method of the Prophet (saw) that shall reunify all Muslim lands, liberate its occupied territories, implement the Islamic Shariah, restore the Islamic way of life and carry the call for Islam to the entire world.

This week, a German court found a Syrian officer guilty of crimes against humanity and gave him a life sentence. The UN High Commissioner for Human Rights Michelle Bachelet said, “This trial cast a much-needed, renewed spotlight on the kinds of sickening torture, cruel and truly inhuman treatment — including abject sexual violence — that countless Syrians were subjected to in detention facilities.” Michelle Bachelet is correct in her description of the brutal and inhumane actions of the Syrian government against its own people. However, what she has failed to mention is that standing behind the Syrian government have been foreign disbelieving powers, with America at their head. Syria was even used by America in its ‘extraordinary rendition’ programme, according to which it would employ foreign sites to interrogate, and torture, suspects. As an article at Al Jazeera notes, ‘in 2013, the Open Society Justice Initiative detailed 54 countries including Germany, Italy, Spain, the United Kingdom and Poland as well as several Arab states including Egypt, Syria, the United Arab Emirates, Yemen, and Jordan that did collaborate with the CIA in their programme of extraordinary rendition. This involved the detention and torture of suspects on their soil.’ America is of course not going to be taken to task over this. Justice in the West is in fact just one more tool in the hands of the Western Capitalist elite to impose their control over their own countries and the rest of the world. Democratic systems enable the West to legislate judicial measures that accord with their interests, irrespective of providing real justice. This is in contrast to the Islamic Sharia which is necessary impartial as it is derived from immutable divine evidences that are free of manipulation for political purposes. Muslims will find their defence and their protection not in Western justice but in the Khilafah State, may Allah (swt) hasten its re-establishment. The Prophet (saw) said,

“Only the Imam is a shield, behind whom you fight and you protect yourself.” [Muslim]