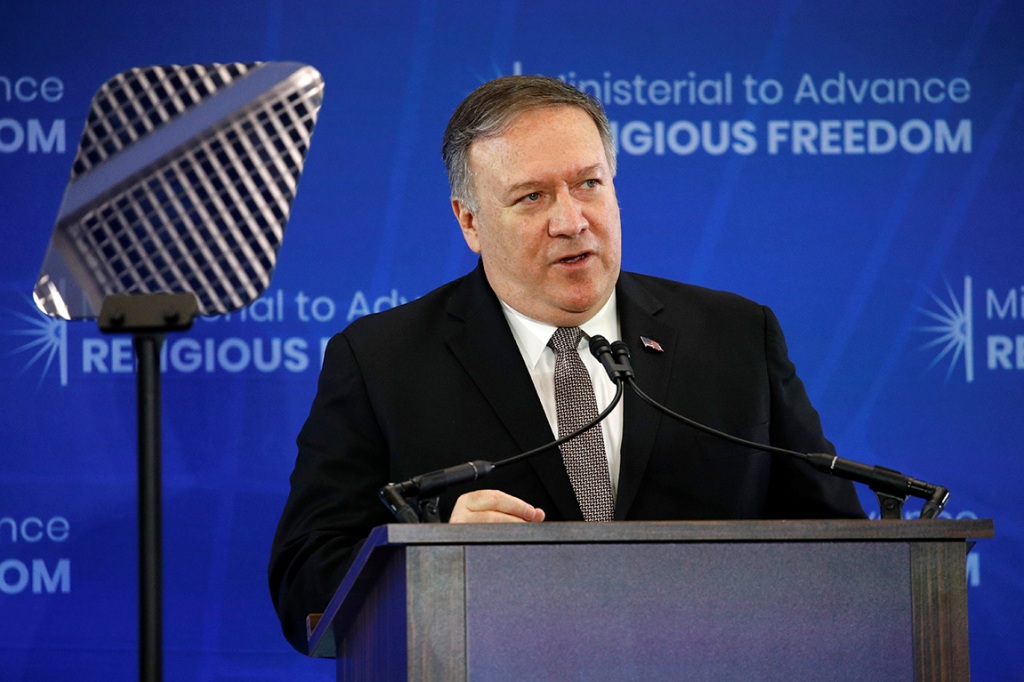 The US Secre­t­a­ry of State Michael Pompeo announced on Mon­day, 7th December 2020, that the United States had designated Pakis­tan, China, Iran, Saudi Arabia, Tajikistan, Turk­m­enistan, Nigeria, Nor­th Korea, Myanmar and Eritrea as “countries of part­ic­ular Concern” (CPC), under its International Religious Freedom Act. The commission’s 2020 report noted that religious freedom conditions across Pakistan had continued to trend negatively. “The systematic enforcement of blasphemy and anti-Ahmadia laws, and authorities’ failure to address forced conversions of religious minorities — including Hindus, Christians, and Sikhs — to Islam, severely restricted freedom of religion or belief,” it added.

The Foreign Office of Pakistan on Wednesday, 9th December 2020, rejected the United States’ designation of Pakistan, terming it an “arbitrary and selective assessment.” In a statement, the FO said the designation was “completely against the realities on the ground” and raised doubts about the credibility of the process, citing the “glaring omission of India” from the blacklist. It also regretted that the United States had overlooked “the fact that Pakistan and the US have been constructively engaging on the subject at the bilateral level.”

The United States consistently uses liberal human rights, international laws and institutions to pressurize Pakistan so that it complies with Washington’s demands. Pakistan is being pressurized to fulfill the stipulations of the Financial Action Task Force (FATF) to crush Jihad in Occupied Kashmir, which will free US’ ally, the Hindu State, to rise as a regional power. Pakistan is caught in the web of IMF’s conditions which have laid waste to its economy, so that local and foreign capitalists may benefit at huge costs to the masses. Previously America pressurized Pakistan to end the safe heavens of the tribal areas’ Mujahideen fighting against US forces in Afghanistan. Now the US is using international institutions to pressurize Pakistan into supporting the continuity of the US puppet government in Kabul, through persuading the Taliban to abandon Jihad to share power with the US agents. The Western human rights are based on freedom from the law of God and they are designed to undermine the Muslims adherence to Islam, protection of the Finality of the Prophethood of RasulAllah ﷺ and the purity and prestige of the Islamic Aqeedah. Yet, rulers comply with US demands with the excuse that they are saving Pakistan from harm, even though it is their compliance to colonialist laws and institutions that causes severe harm to the interests of Islam, Muslims, and Pakistan.

The US has spun a web in which to entangle the current states of Muslim World to maintain the current Western colonialist world order. The only escape is the re-establishment of the Khilafah (Caliphate) on the Method of Prophethood. Islam warned us about following the disbelieving kuffar. Allah (swt) said, يٰۤـاَيُّهَا الَّذِيۡنَ اٰمَنُوۡۤا اِنۡ تُطِيۡعُوا الَّذِيۡنَ كَفَرُوۡا يَرُدُّوۡكُمۡ عَلٰٓى اَعۡقَابِكُمۡ فَتَـنۡقَلِبُوۡا خٰسِرِيۡنَ “Believers! If you follow those who deny the Truth, they will drive you back on your heels, and you will turn about, losers.” [Aali Imran, 3:149]. Moreover, Islam orders us to challenge and eradicate all falsehoods and make Islam the only dominant force on the Earth. Allah (swt) said, هُوَ الَّذِىۡۤ اَرۡسَلَ رَسُوۡلَهٗ بِالۡهُدٰى وَدِيۡنِ الۡحَـقِّ لِيُظۡهِرَهٗ عَلَى الدِّيۡنِ كُلِّهٖۙ وَلَوۡ كَرِهَ الۡمُشۡرِكُوۡنَ “He it is Who has sent His Messenger with the guidance and the True Religion that He may make it prevail over all religions, howsoever those who associate others with Allah in His Divinity might detest it” [Tauba, 9:33]. It is time to reject the current international order of Kufr, re-establishing the Khilafah so that a new global order based on Islam can arise.