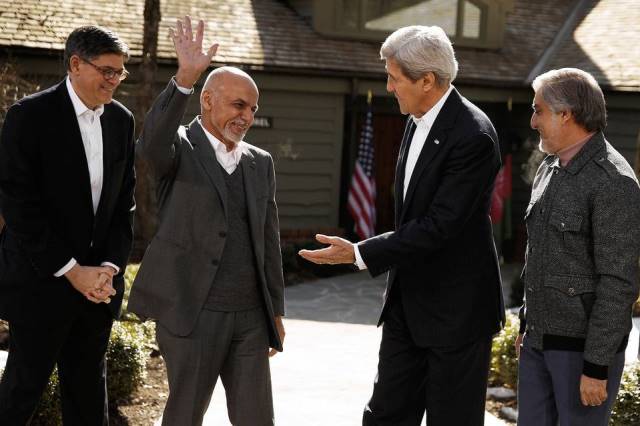 In the press release issued by the Presidential House (Arg) on 20th July 2015, President Ghani expressed “profound sorrow over the death and wounding of a number of Afghan National Army soldiers as a result of Air strike by the International Forces”. Ghani also said, “The international forces should take maximum precautions not to harm the people and security forces of Afghanistan in their operations in the future”.

It is indeed disgusting to see such an impotent response of the Corrupt Ruling Club of Disunity Government, imposed upon Afghanistan. They have no courage to even condemn the horrific killings of around 14 of its soldiers. Mere expressing “sorrow” over their “death” is sufficient to know whom this Ruling Club are loyal.

The reason why Hizb ut Tahrir was warning the Muslims of Afghanistan of the notorious and utterly anti-Islamic pacts, both security and strategic, was for this day, when the U.S. is indiscriminately killing civilians and soldiers alike and are hiding behind the indemnity provided by these pacts.

Most certainly the Khilafah Rashidah will protect the blood, honor, dignity and unity of this noble Ummah and will not allow the enemies of Muslims and Islam to spill even a drop of blood of any Muslim.

“I saw the Messenger of Allah ﷺ performing tawaf around the Holy Ka`ba saying to it: ‘how pure and good you are! How pure and good your fragrance is! How great and exalted you are! And how great and exalted your sanctity is! But by Him in whose hand is Muhammad’s soul, the sanctity of a believer’s blood and property in the sight of Allah is greater than your sanctity!’”.