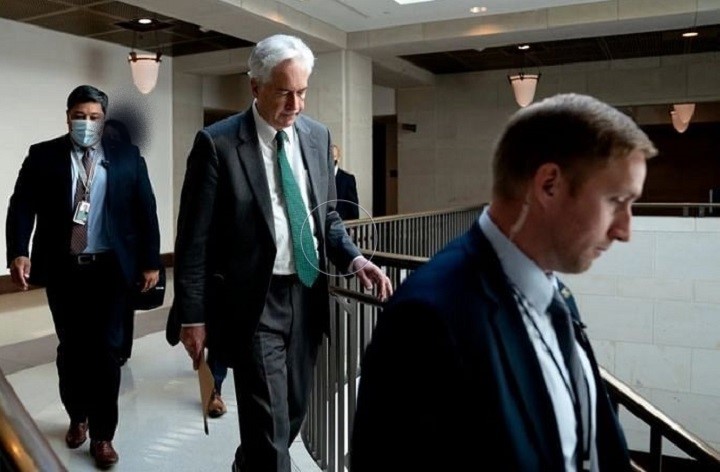 Sticking to their old tradition of lying to the Ummah, the foreign minister, the foreign ministry and other government officials threw dust in the eyes of Muslims, emphatically ruling out a US military base. However a New York Times report exposed their deception, asserting that Pakistan is still in negotiations with the United States at the highest level, to transfer the US military structure from Afghanistan to Pakistan, with various details being worked out currently.Elaborating details in its June 6 report, the newspaper clarified that the CIA Director, William J. Burns, had recently paid a secret visit to Islamabad in this regard and met the Chief of Army Staff, General Qamar Javed Bajwa and Director General ISI, General Faiz Hameed. The US Secretary of Defense, Lloyd J. Austin, is also in constant touch with General Bajwa. The purpose of having this military base and military structure in Pakistan is to carry out operations against so-called terrorism in Afghanistan. However, it will also build capacity of the US to conduct terrorist activities within Pakistan, as well as espionage against our nuclear sites. It will also help the US to increase its capacity of telecommunications and signals intelligence in our region, securing the US military presence in the region.

O Muslims of Pakistan! The Afghan Mujahideen have truly buried the arrogance and pride of Bush, Obama, Trump and Biden in the graveyard of empires, Afghanistan, through jihad, forcing the US to lick the dust of defeat. The US forces could not withstand a few thousand tribal Muslims who do not have basic defense capabilities such as air defense, armed with small arms and are poorly trained. However, they still forced the US to flee, although the invading NATO forces of forty-two countries was equipped with state-of-the-art weapons. So what is the reason that the Pakistani military leadership, from Musharraf to Bajwa, which commands more than 600,000 troops and is equipped with all kinds of modern weapons, has been conducting military operations for the sake of US and remains the guardian of the ALOC and GLOC supply lines for the US forces? Whilst the United States has not been able to crush the Afghan resistance, the political and military leadership of Pakistan is now playing the role of a hired facilitator for the United States in various forms, including forcing the Afghan resistance to participate in the US installed Kabul government, whilst negotiating with the US to move its military structure to Pakistan. How long will we tolerate the betrayal of these rulers with the Muslims?How long will we be deceived by the false denials of these rulers?Does our love for Allah (swt) and His Messenger (saw) allow us to hand over the use of our intelligence and armed forces to the United States? How can we allow these rulers to use our military power and resources to protect the interests of the United States, whilst the same rulers simply refuse to mobilize our military force to protect the honor of the Messenger of Allah (saw) and to liberate Al-Aqsa Masjid, Palestine and Kashmir?

O Muslims of Pakistan’s Armed Forces! The rulers of Pakistan in the political and military leaderships do not have the courage to refuse any request regarding you from the US. The established track record of their betrayal of our Ummah is ample evidence of that. Their master in the White House allows them to issue statements that mislead the people of Pakistan and their army officers, only so that they can do everything that America orders them to do. They do so even though the US is at war with Allah (swt) and the Muslims of Pakistan and beyond. Indeed, they are agents who cannot think of rejecting any request from their masters, or even try to think of rejecting. Pull the carpet from under the feet of these lowly rulers, granting your Nussrah to Hizb ut Tahrir for the re-establishment of the Khilafah (Caliphate) on the Method of Prophethood, which will rapidly eliminate the American Fitnah from the entire region. Allah (swt) said,

“And do not incline towards the wrong-doers lest the Fire might seize you and you will have none as your protector against Allah; and then you will not be helped from anywhere.” [Surah Hud 11:113]