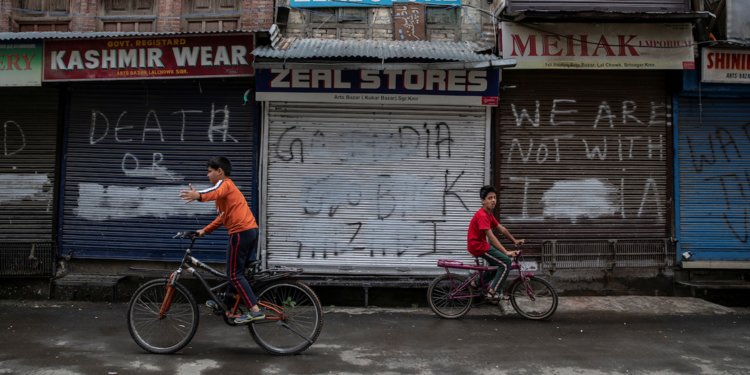 On the 15th of August 2019, the UK newspaper, The Telegraph reported on the disturbing abduction of Kashmiri children following India’s attempted annexation of occupied Kashmir. A team of Civil Society Members including Jean Dreze and Maimoona Mollah, have documented the accounts of children who say that they were detained and beaten by Hindu Security forces as the ongoing lockdown of Kashmir tightens its grip of terror upon the Muslims in the area. A complete media blackout allows for such heinous crimes to go unreported, but a group of human right activists were able to tour parts of Kashmir and make a film recording the abuses that they have uncovered. They were not permitted to use the usual Press Club of India media outlets to expose the atrocities but have since uploaded their footage onto YouTube under the title of “Kashmir Caged”. In one specific incident, an 11 year old boy in Pampore was held at a police station along with hundreds of other boys older and younger than him. There he was viciously beaten. These children are often taken by force from their beds in the middle of the night in raids aimed to terrorize them and their families, during which women and girls in the house are usually molested as well. The video gives an account of another young boy who was abducted after Salat in the Masjid on the 5th of August. He reported that there were 10 or 12 other young boys with him. All this is alongside the terrible injuries that the brutal Hindu state has previously inflicted on Muslim children and youth in Kashmir, including blinding them with metal pellets during protests against this murderous occupation.

The Hindu state has been given a free-hand to abduct and abuse the children of this Ummah due to the absence of a state today which has the political will to mobilise its army to come to their defense and to strike fear into the heart of the Modi regime. All of the current Muslim rulers are complicit in the torture and violation of the rights of the children of Kashmir due to their silence, inaction and failure to send their armed forces to protect the oppressed Muslims of Kashmir. The shameful and spineless response of Pakistan Prime Minister Imran Khan for example, has been to simply utter empty words of condemnation and go begging to the defunct and impotent UN to force India to back-track on its recent belligerent move. This is the same UN, whose resolutions regarding rights violations in Kashmir, the Hindu state has ignored and flouted with impunity for the past 7 decades.

“A Muslim is the brother of a Muslim: he does not oppress him, nor does he abandon him.”

However, under the current regimes of the Muslim world, they have made the abandonment of the oppressed Muslims a state policy, chaining their soldiers to their barracks while their brothers and sisters bleed, their mothers and daughters are dishonoured and their children are kidnapped and tortured. We ask, the sincere sons of Iman in the Muslim armed forces, for how much longer will you give your allegiance to these cowardly rulers, who are the embodiment of treachery, and who care nothing for the Muslims, have strengthened the hands of the enemies of this Deen, and have kept you from fulfilling your duty to your Ummah? For how much longer will you witness the subjugation and slaughter of your brothers and sisters in Kashmir, Palestine, Syria and elsewhere, while turning your back upon them, despite knowing the scale of anger of Allah (swt) towards your inaction? And for how much longer will you deafen your ears to the terrorized screams of the children of this Ummah, and close your eyes to the tears of shame of your dishonoured sisters… while knowing that you can put an end to all of this?

We call you to rise to your Islamic duty of defending the Muslims, striking fear into the hearts of the enemies of your Deen, liberating occupied Muslim lands, and giving your Nusrah (material support) to Hizb ut Tahrir for the establishment of the Khilafah (Caliphate) based on the method of the Prophethood which will be the guardian of every Muslim man, woman and child. It is a state which will never accept for the disbelievers to have an upper hand over the Believers, or be allowed to terrorize or torture a single Muslim child.

“O you who believe! What is the matter with you, that when you are asked to go forth in the cause of Allah, you cling heavily to the earth? Do you prefer the life of this world to the Hereafter? But little is the comfort of this life, as compared with the Hereafter?”
[TMQ 9: 38]