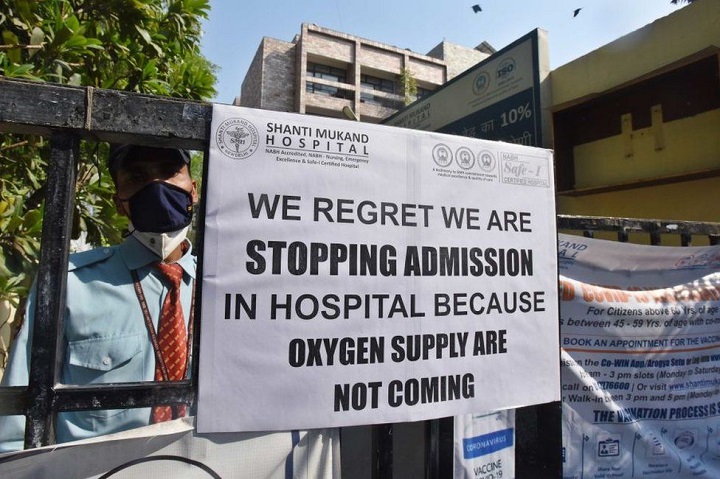 Delhi, UP, Gujarat, Haryana oxygen demand outstrips supply; PM Modi holds crisis meeting Records show, the demand for medical oxygen has increased by 18 per cent over the last six days across 12 states, which account for 83 per cent of active cases in the country. [The Indian Express|24th April 2021]

Comment:
India broke the world record for the newest Coronavirus cases last week, surpassing 3,30,000 new cases on Friday (23.04.2021), the highest single-day figure for any country since the pandemic began and 2,104 deaths in one day shows that India face severe shortfalls in the supply of oxygen. With four of the states of India (Delhi, UP, Gujarat and Haryana) worst hit by COVID battling a critical shortfall between demand and supply of oxygen in their hospitals. India has sufficient stock of oxygen, says the Union government. It means the catastrophic oxygen crisis in the country is created artificially for profiteering or due to obstruction of its smooth movement because of carelessness and mismanagement. This essential commodity for sustaining human life is not reaching all the critical COVID patients admitted in hospitals, causing their death in large numbers. It amounts to culpable homicide. As per the data of the Union Ministry of Health and Family Welfare, the daily medical oxygen requirement was 8,000. MT but the daily total oxygen production was about 7,200 MT only. Due to lack of medical grade oxygen, industrial oxygen is being diverted and purified for use of patients. The Union government has said that the total medical and industrial stock in the country was 50,000 MT. The duration the reserves will last at current demand is 2-8 weeks only. [Scroll investigation |22nd April 2021].

In this scenario, it is visible that, Modi’s Indian government’s policies are the greatest contributing factor for the present crisis. Even amidst the pandemic, India exported 9,884 MT industrial grade oxygen between April 2020 and January 2021 earning Rs 8.9 crore from the trade as against only 4,500 MT in the previous year. Export of medical grade oxygen during the same period was only 12 MT. This raises the question that, if the oxygen can reach distant foreign countries to earn the huge profits, why can it not reach a hospital within the geographical boundary? Here comes the question of priority of Modi Indian government which ignored the needs of the citizens and preferred to have concern for economy and profit than healthcare of the people. The Modi’s Indian government not even care for their own citizens and are incapable of managing the affairs of the people. It is not surprise that the country which adopted the capitalist ideology and the ruler in the democratic system will behave in this manner.

The nature of all democratic politicians is to utilize the government to enrich themselves and to enrich the elite from public funds in the name of serving the people. They neither care being accounted by people nor by Allah, since in reality their secular thought has no concern of the Guidance of Allah. In Islam, politics is taking care of the people and is a huge trust that a politician has to be monitored by ordinary people, and a strong institution of the Court of Injustice (Mahkamat ul Madhalim) above all he/she would be harshly accounted in Hereafter. Thus, in Islam politics is not a beneficiary business but is a burden that needs to be carried out with a fear of Allah (swt). It is natural then under Islamic rule of Khilafah Rashidah (rightly guided Caliphate) mismanagement and carelessness in running the affairs of people would not exist as in the capitalist democratic system today.

The country like India and the whole world needs Islam to solve their problems. Islam, the true ideology, with its inherent leadership characteristics and the ruler who fear Allah (swt) in managing the affair of the people, alone can provide solution for the entire world. In the Islamic Khilafah state, the issues related to healthcare are solved with its inherent leadership characteristics. It is obligatory upon the state to provide the basic needs for its subjects The basic needs are of two types: basic needs of individuals “food, clothing, dwelling”, and the basic needs of Ummah “medicine, security and education”. Remedy for disease is an obliged expense imposed on Bayt ul-Mal (State Treasury). Therefore, the Khaleefah must provide individuals with health care and provide them with medicines and hospitals. If the revenues derived from the permanent sources of income for Bayt ul-Mal are insufficient to cover the expenditure of the State, it is permitted to collect taxes from the Muslims to cover the expenditure obliged on Bayt ul-Mal.

Islam emphasizes development of Medicine and infrastructure for any disease. Islam has paid great attention to health care and has caused a revolutionary qualitative shift from the world of magic, witchcraft and myth to the world of science and experimentation, which has contributed to the advancement of medicine. The Ummah of Islam was a pioneer in the field of health and medicine, leading the world with the guidance of Allah and His Messenger (saw). Islam led (and will lead) the whole world in creating good hospitals and supplying them with their needs. An example to this is that the Bimaristan (i.e. hospital) established by Nur al-Din in Damascus in 1160, lasted for three centuries. The Khilafah state will be the state of care for its subjects. Its concern is of the people not the benefits.

It will invest in medicine not a favor to its citizens or as a profitable return rather than a state’s obligation in fulfilling the public needs which include security and health. Origins of the use of “Vaccination” for preventing the spread of infectious diseases is found in the Uthmani State stands as a proof for the care taken by the Khilafah State of its citizens. It is the Khilafah state, the state of care that both the Muslims and the non-Muslims miss today; and by the promise of Allah (swt) and the glad tidings of His Messenger (saw) it will return Insha Allah, the Prophet (saw) said:

“Then there will be a Khilafah (caliphate) on the method of Prophethood.”