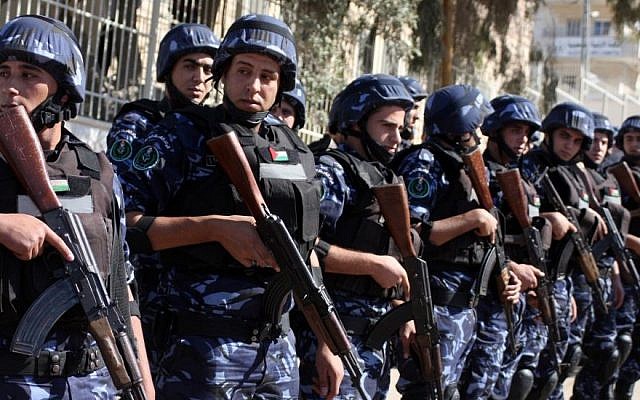 “Indeed, the ones who oppose Allah and His Messenger – those will be among the most humbled” [Al-Mujadila: 20]

Day after day, the people of Palestine are assured of the amount of success that General Dayton has achieved, who promised the world and the Jewish entity the new Palestinian. He is the Palestinian that Dayton trained to be an enemy of Islam and the people of Palestine. A Palestinian who coordinates with the enemy against his people, a Palestinian who fights the rituals of Allah (swt) and attacks Allah’s houses and worshippers, a Palestinian who lives with love and peace with those who usurped the land and violated the sanctities and shed blood, and in return he arrests, strikes and suppresses those who raise their voice exposing betrayal or calling for the establishment of the of the Deen, so congratulations to the Jews and the enemies of Islam to have you.

O People in the Blessed Land: The attack carried out by the Palestinian Authority on the Friday that followed the crime of the shrine of the Prophet Musa (as), against the worshippers; it drove them out of the mosques and dispersed them from the squares in a brutal manner with bullets, batons and gas, blood was shed, the sanctities were violated and the nobles were arrested to stop people from holding the Friday prayers.  Among its crimes was the assault in Qalqilya against the notable Dr Bassam al-Da’ur, 66 years old. His ribs were broken and it nearly killed him, without taking into account his position, age or knowledge. And in Tamoun, in Tubas governorate, it arrested Dr. Fadi Bani Odeh, beat him brutality, and attacked dozens of worshippers with beating and abuse, they were only attacked for holding the prayer. Here we ask the head of the Palestinian Authority, his prime minister and their security or criminal apparatus: Have you moved to protect an olive tree from the settlers’ attacks as you moved to prevent people from holding the prayer?! Did any of you raise his voice in the face of a settler as you raised your batons on worshippers in ruku’ and sujud?!

Then came the arrest of the intelligence service of the distinguished teacher and educator Hassan Al-Masri from the town of Deir Abu Mishaal, Ramallah district; they tortured and abused him and concealed the place of his detention, may their hands be paralyzed and Allah’s wrath be on them on their crimes.

Delegations went to the governorates to express their discontent with what the Security Services had done, and demanded accountability of those who assaulted the people, and on Sunday 10/1/2021, we handed over a letter to the Ramallah governorate, asking them to explain their position on the crime committed by Mahmoud Ibrahim Hammad, Director of Ramallah Intelligence towards the distinguished teacher and educator Hassan Al-Masri, and we gave them 48 hours that ended yesterday, and they did not comply.

O our people elevated by Islam: This is an Authority that came to your country barefoot, its men naked except from humiliation and debasement, you sheltered them and fed them, so now they are sucking your blood and consuming your money, attacking your mosques, and intending to demolish your families and fight your chastity. They oppress you because they are the tool in the hands of your enemy.

The one who is tempted to assault worshippers in ruku’ and sujud and fighting the praying worshippers, and being indulged in humiliation towards the aggression of the Jewish entity and its settlers, is a criminal who does not belong to the blessed land, and the Palestinian Authority’s aggression against the worshippers and mosques is an aggression against the people of Palestine. The people of Palestine should pursue these criminals through tribes and legally until all criminal has his share of the penalty. If the Palestinian Authority does not hold accountable the criminals who have shed the blood and violated the sanctities of the people, it will push people to take their rights by their own hands for the people of Palestine are not an easy pick, but rather they are free servants of Allah (swt), Allah (swt) chose them to be on the blessed land to be holding on to the truth. It is better for the Palestinian Authority to stop the hostility against the people of Palestine and the fighting against Islam. Allah (swt) has destroyed tyrants at the hands of this Ummah who thought they would never fall. The Palestinian Authority does not amount to a tenth of their strength, this Ummah does not remain silent over injustice, but rather puts under its feet those who betrayed it, oppressed it and assaulted its Deen. If there a sane person inside the Palestinian Authority, let him leave it before it is trampled upon by the feet. The dawn of Islam is about to emerge by establishing the Khilafah (Caliphate), to dispel the darkness of the world with its light, and then you know who will be victorious. Allah (swt) says:

“And [yet], among the people are those who take other than Allah as equals [to Him]. They love them as they [should] love Allah. But those who believe are stronger in love for Allah. And if only they who have wronged would consider [that] when they see the punishment, [they will be certain] that all power belongs to Allah and that Allah is severe in punishment” [Al-Baqara: 165].