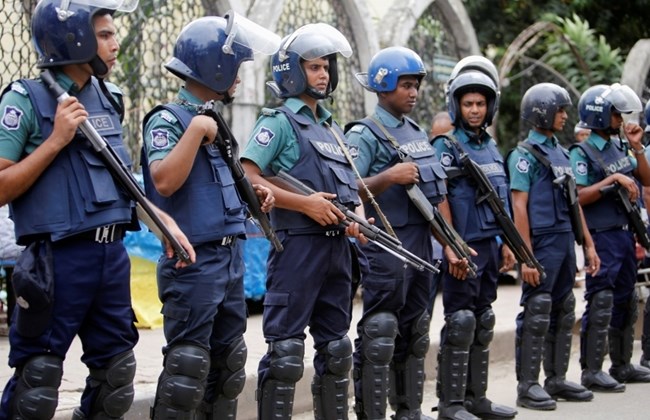 “Indeed, Allah said: ‘The one who humiliates my waly (pious servant) he has displayed hostility towards me…’” [at-Tabarani]

Last week, members of a law enforcement agency of the Hasina regime unlawfully arrested Mohammad Salman (32), a sincere activist of Hizb ut Tahrir, from the Daniya area under Kadamtoli Police Station in Dhaka. Then, in a vicious way by orchestrating a false incident they included him in a running case dated 12.08.2020 against JMB members. It has already been established among the people clearly like daylight that the members and activists of Hizb ut Tahrir are doing an intellectual and political struggle in a non-violent way for the re-establishment for Khilafah Rashidah (rightly guided Caliphate), and in this path they are following the method shown by our beloved Prophet Muhammad (saw) in every step. So, such a blatant lie against a sincere activist of Hizb ut Tahrir is absolutely unacceptable, and we strongly condemn it and demand his immediate release from the false case.

Hizb ut Tahrir, after its inception in 1953, as part of the method shown by RasulAllah (saw) to establish Khilafah, has been doing intellectual and political struggle against the agent rulers in various Muslim lands to expose the plan of the Kafir colonialists against the Ummah and to adopt the interest of the Ummah, and also has been calling upon the sincere officers in the Armed Forces so that they give nusrah (material support) to Hizb ut Tahrir for the re-establishment of Khilafah Rashidah. As a result, in Bangladesh like in other Muslim countries, the removal of the secular system and rulers which are forcefully implemented on us by the Kafir Imperialists and the re-establishment of the Khilafah are now very imminent, Insh’Allah.

Finally, we want to say to members of law enforcement agencies, any heinous act from you against the pious activists of Hizb ut Tahrir, only increase the hostility of Allah (swt) against you, RasulAllah (saw) said: «إِنَّ اللَّهَ قَالَ: مَنْ أَهَانَ لِي وَلِيًّا فَقَدْ بَارَزَنِي بِالْعَدَاوَةِ» “Indeed, Allah (swt) says: The one who humiliates my waly (pious servant) he has displayed hostility towards me…” [at-Tabaraani]. Don’t forget that, there is no obedience by disobeying Allah (swt). A small creation of Allah (swt), the coronavirus (COVID-19) has shown how weak human are! Do not be the foot solders of this downfallen secular regime. Take lesson, otherwise you have to face the same trial under the imminent Khilafah’s justice like this criminal regime as partner of their crimes. Allah (swt) says,

“Indeed in that is a reminder for whoever has a heart or who listens while he is present [in mind]” [Surah: Qaf: 37]