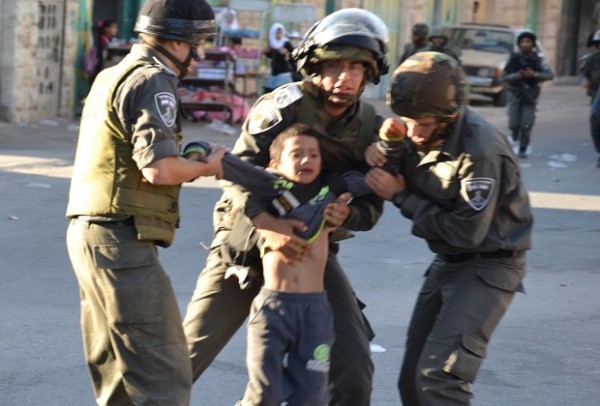 The Jewish entity’s mass arrests against Palestinians increased dramatically in December, the Palestinian Commission of Detainees and Ex-Detainees Affairs revealed yesterday, noting that 95 per cent of the new prisoners are youths. “Israeli forces’ violations and arbitrary measures against the prisoners have neglected the age differences,” the committee pointed out.

Ahmed Samirat, a 17-year-old Palestinian from the Hebron village of Yatta, was brutally attacked and tortured by 12 soldiers, leaving him unconscious for five hours,” the Palestinian committee said. (Middle East Monitor Online, 22/12/2017)

Ahed Tamimi (16 yr. old girl from Nabi Saleh) was grabbed from her home late at night by the Jewish forces on December 19, 2017 after her 15-year-old cousin Mohammad was struck point-blank in the face with a rubber bullet, which left him in a coma for 72 hours. (Aljazeera)

According to Defense for Children International, from the moment of arrest, Palestinian children are subjected to ill-treatment and torture at the hands of the occupying Jewish forces. Three out of four experience physical violence during arrest and/or interrogation. Many human rights committees point out the alarming number of Palestinian minors detained illegally without legal representation and without known charges in detainment centers of the Zionist entity. This is common information that the Jewish soldiers subject these children including girls to a horrifying range of abuse, harassment and rape. Yet the United Nations, which trumpets the call for child rights to the world, yet glaringly ignores any significant measures against this occupying force. Even worse the crocodile tears shed by the Muslim leaders, most prominently Erdogan, do not take tangible measures that would make the Jewish entity think twice before committing such atrocities. Yet recently we have seen the major media exposure highlighting the brave young girl Ahed Tamimi, that was snatched from her home yet to no surprise to our Ummah we have not heard any statement from the Palestinian Authority president; an accustomed characteristic of our rulers… pure failure and disappointment to our youth in the Zionists prisons. This is only one case however there are hundreds of minors still detained under their grip without the media exposure or legitimate government action.

Boys and girls are raped, molested, abused, beaten, bullied into succumbing into fake confessions then sentenced as adults only for these crimes to persist. Criminal interrogation used against the youth in order to traumatize them. We see little children playing with their bikes or footballs picked up and then CAGED in broad daylight for all to see as the images were posted from Hebron on social media.

These children are our children our honor our responsibility, where is the vanguard for these vulnerable youth?! We see the outrage from those who snap pictures of the widespread emboldened aggression and post them for others to witness. It is not enough to rally around the news coverage but to expedite stern action to firstly free these youth from their ongoing horrors and secondly to ensure that other children are never subjected to these circumstances from the children of the Quds, Hebron, Gaza, Ramallah and many other towns. Where is the strong action of the Muslim generals to give the orders to their armies to free our youth from the clutches of the Jewish entity and then obliterate the prisons over the occupiers’ heads?