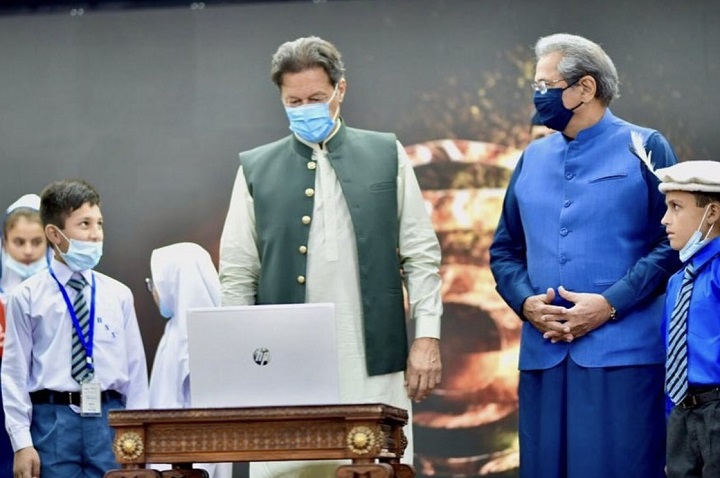 Prime Minister Imran Khan on Monday, 16 August 2021, launched the­ Single National Curriculum at a ceremony in Islamabad. He spoke about how cultural imposition is tantamount to ‘mental slavery,’ saying that Afghans had “broken the shackles of slavery.” His comments came as the Taliban effectively took control of Afghanistan, after days of rapid advances in the country. “When you acquire English medium education, you adopt the entire culture and it’s a major loss because you become slave to that particular culture,” he said.

Comment:
Since his retirement from international cricket back in 1992, and particularly since he joined politics in 1996, Imran Khan has been presenting himself as a truly enlightened individual, who understands the Western culture, but is not besotted or overawed by it, so does not consider his people as inferior to the Westerners. He severely criticized the establishment of the NATO supply line in Pakistan and supported the Afghan Taliban by saying that their cause is a just cause. He asserted that he will bring Pakistan out of alliance with America, pursuing an independent foreign policy. He condemned Nawaz Sharif for his closeness to Modi and as a traitor to the Kashmir cause. He warned of the grave dangers of the IMF and World Bank to the economy. He even claimed that he will make Pakistan a state like Madinah founded, by the Messenger of Allah (saw). So, he portrayed himself as one who was heavily exposed to Western education and deeply immersed within the atmosphere of the Western elite, but wholly unaffected by it, remaining Eastern and loyal to his people.

However, when Imran Khan became the Prime Minister of Pakistan, he turned his back on what he said previously. He deepened alliance with the US, facilitated talks with the Taliban to secure US influence after withdrawal and maintains the air and ground supply lines until now. Upon US dictation, he restrained Pakistan Army when Modi forcibly annexed Occupied Kashmir in August 2019, even going so far as to declare anyone crossing the LoC for Jihad, as a traitor. Instead of liberating Occupied Kashmir as Azad (Liberated) Kashmir was, by fighting, he referred the Kashmir cause to the international order and its guardian the United Nations, which intervened in 1948 to prevent the liberation of Occupied Kashmir in the first place. As for the IMF and World Bank, Imran Khan has destroyed the economy by following their every dictation. As for Islam, he has ignored calls to expel the French ambassador after Macron backed assault on the honor of the Messenger of Allah (saw) and has given the liberals free hand to pollute the society with their corruption. So, Imran Khan is acting exactly according to the intellectual hold of his Western culture and the dominating political influence of the Western elite over him. He has certainly not broken the shackles of slavery of the West.

As for now, after the fall of Kabul, the US has become a laughing stock on the world stage and so its agents, including Imran Khan, are trying to save face. So his saying that Afghans had “broken the shackles of slavery” is just to cover his regimes shear embarrassment in front of the Muslims of Pakistan, as they rejoice at the defeat of the US in Afghanistan. Indeed, he himself is the prime example of political and intellectual slavery to the West. Indeed, the Muslims must strive for the Khilafah (Caliphate) on the Method of the Prophethood which will implement Islam in all walks of life including education. Only then will we have rulers that will not be slaves of the West, rising to be an Islamic intellectual and political leadership for the entire world, leading the world towards prosperity and welfare of both worlds, the Dunya and the Akhira. Allah (swt) said,