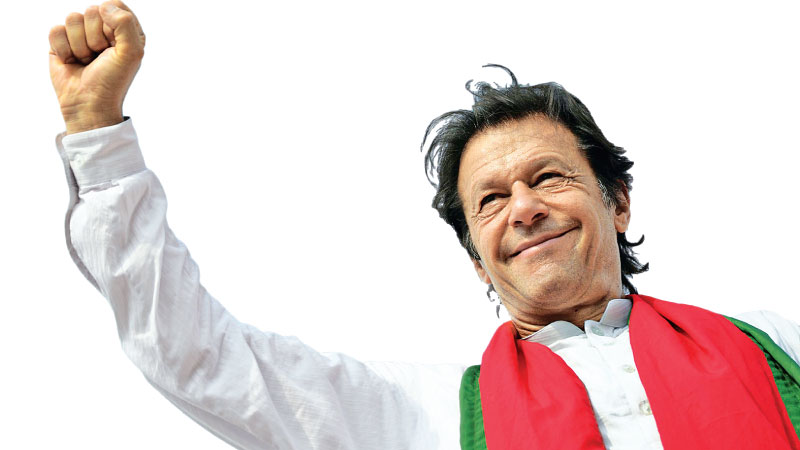 “When I came into politics, I wanted Pakistan to become the kind of country that our leader Muhammad Ali Jinnah wanted….Where Pakistan is standing right now, I am telling you that we will run Pakistan like it has never been run before….and we will start with ourselves….Thank god we have been successful and got a mandate.”

Euphoria has gripped Pakistan as former Cricketer turned politician Imran Khan and his Pakistan Tereekh-e-Insaf (PTI) party decimated the established parties. The worlds media all watched as the results trickled in showing the old pillars who have dominated the country’s political system seem to have fallen to the Tsunami Imran Khan always spoke about.

The electoral result is largely irrelevant as whoever won, they face multiple, multifaceted and deepening challenges. Whoever forms the government faces a colossal task of over three decades of gross mismanagement and plundering. If history is anything to go by, all the rulers of Pakistan for the past three decades, be they the military or civilian have all failed and left office leaving the country worse off than when they entered office.

Pakistan’s economy has for long not been fit for purpose. Successive regimes have run it into the ground and neglected to deal with urgent economic challenges. Pakistan has a population of 200 million, but its GDP is a mere 300 billion. Denmark and Ireland have smaller populations then Faisalabad, but have larger economies then Pakistan. 60% of Pakistan’s economy is service based (Transport, storage, communications, finance, wholesale and retail trade) but 42% of its labour force is employed in agriculture. Pakistan’s industry lacks much in the way of advanced manufacturing or heavy industry. Cotton textile production and apparel manufacturing are Pakistan’s largest industries, accounting for 66% of exports.

Pakistan is not built upon its strengths and for most of the population the economy does not serve them in anyway. This is why successive regimes always had trouble with government finances. 150 million of Pakistan’s 200 million population live on less than $5.50 a day. The new regime will need to bring the masses into the economy and not leave them in servitude as successive regimes have done, whilst they have been busy enriching themselves. The masses are in no position to pay any taxes, which would increase government revenues and the rich pay little or no taxes at all. The new government will need radical policies to alter this reality, a reality successive regimes have left unchanged and continued with more of the same policies that created the problem.

The biggest drain on Pakistan’s finances is debt. Pakistan spends over $11 billion – 30% of its budget in debt repayments every year. Pakistan’s external debt situation will reach the $100 billion mark at some point in 2019. As successive regimes failed to address the nation’s fiscal issues and the wider economy, successive regimes turned to IMF debt to survive. Since 1958 Pakistan has been on 16 different IMF programs, yet the economic conditions within the country remain dire and the debt continued to increase. There is not one example of a nation borrowing IMF money and turning its economic fortunes around. As Pakistan’s exports are on the low end of the value-added chain, they bring in little currency and do not help with government finances. When Musharraf strengthened his alliance with the US, she bankrolled his regime with reimbursements, remittances and aid. But then the handouts came with strings attached, successive rulers turned to the IMF and the debt situation has just got worse.

Unless the new regime deals with these fundamental economic challenges with new radical solutions, it will suffer the same fate as its predecessors. Turning to the IMF again will make things worse, as they have always done. Pakistan needs to restructure from services to manufacturing and build its own industry which will stimulate the wider economy. Privatising state assets, Foreign Direct Investment (FDI) and borrowing from the international markets has already been a recipe for failure. Pakistan’s own resources are ample enough to make such a change.

Politically, Pakistan has an entrenched and unelected “elite” group of people. Pakistan’s military leaders and Directorate for Inter-Services Intelligence (ISI), exert a controlling influence over most of Pakistan’s core policies. Around them, you then have a relatively small cadre of politicians, senior bureaucrats, and well-connected business families who have led, managed, owned and spoilt most of the country since its independence in 1947. These elites view Pakistan as their personal bank account that should serve them, rather than the people.

The elites have around them numerous opportunists, political parties and others who perpetuate this self-serving system. No amount of reform, elections and dictatorships will change this system – it has to be uprooted for real change to take place.

The challenge Imran Khan faces is these ‘electables’ who are the corrupt part of the countries system were all allowed to join Imran Khans party and this is what led him to office. The army leadership ensured Nawaz Sharif was dragged through the courts due to corruption and this cleared the way for Imran Khan’s victory. Imran Khan has now become part of the very same system he always said was corrupt. Imran Khan now faces the very same challenge Erdogan faced in 2002 when he won the elections and faces an entrenched and dominate army. He used the large electoral mandate to make constitutional amendments and turned the economy around and this allowed him to challenge the army leadership.

Whoever came to power in Pakistan would face this same reality and this has been the case since the very creation of Pakistan. If this entrenched system is not changed then Pakistan will remain the same, for the few, by the few.

One could question why foreign policy should be a focus of the new regime when the nation has huge domestic problems to tackle. Pakistan’s biggest failure since its inception has been to join the global powers in their political plans rather than charting its own course. Pakistan has never charted its own course as it’s never had a global mission. Despite being created in the name of Islam, the rulers have never used this to form its foreign policy.

In 1956 Iskandiar Mirza became governor general and subsequently President and sealed Pakistan’s fate with the US. He married his son to the US ambassador’s daughter and appointed General Ayub Khan as Pakistan’s first CMLA. Through the ambassador, the US was able to win the loyalty of General Ayub Khan and he overthrew the president three weeks later and exiled him to the UK.

This sealed Pakistan fate as a subservient state to the US and ever since Pakistan has taken part in all of America’s geopolitical strategies irrespective of its benefits or costs to the country. Pakistan became a bulwark against the rise of communism in South Asia, it became the bulwark against the Soviet invasion into the region in via Afghanistan in 1979. The US invasion in 2001 saw Pakistan execute the US plan of occupation and long-term presence in the region.

This servitude to the global power has cost Pakistan dearly. America’s war on terror has cost over £123 billion and 50,000 lives. Whilst the army leadership and rulers have personally benefited from US handouts, the country has been languishing in poverty. No amount of trying to gain crumbs from the US under slogans such as ‘Pakistan first’ can alter to damage being a slave to US has caused.

As global power is shifting from the West to the East, as China rises and challenges the US, as central Asian energy comes online and as India rises the region and much of the balance in the world is changing and it would be extremely shot-sighted to continue in the slave relationship with the US. This is the stark reality that faces whatever party or personality is in power in Islamabad.

Imran Khan had mentioned of establishing the fifth rightly guided Khilafah and establishing the Medina model of our Prophet (saw). No details or policies have ever been presented on this. However, whoever the rulers of Pakistan are would face the same question: do they want to be another footnote in Pakistan’s history or will they actually uproot the failed system and actually make real change? In Pakistan’s long and turbulent history, this is the challenge facing the current ruler.