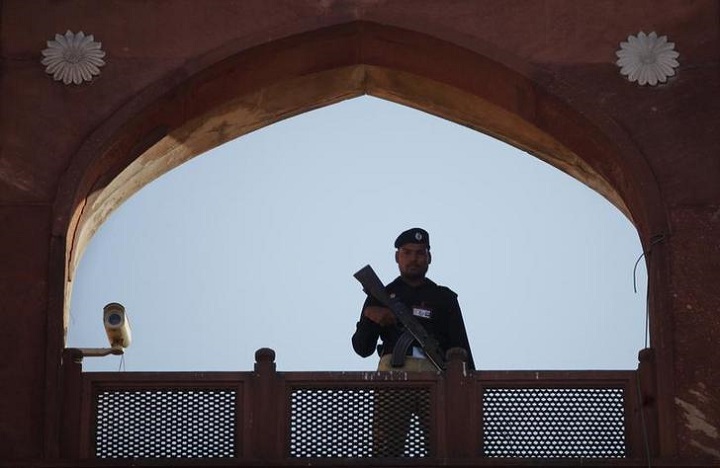 It is not the imported government in Pakistan alone that is na-manzoor, unacceptable, it is the imported system that enslaves Pakistan to the colonialists. Regardless of whether the government was removed due to a foreign conspiracy or an internal power struggle, some are trapped into discussing foreign interference superficially. They are more concerned about whether the right word to choose is interference or conspiracy, whether it was a letter by the US government or minutes taken by our own Ambassador, whether it was a formal meeting or informal, whether it was the opinion of Donald Lu or US State policy? They are debating all this as if US interference, or even better intervention in Pakistan’s politics is some kind of secret! Are they oblivious to the fact that not just Imran Khan’s government, but all previous governments, including that of NS, Zardari and Musharraf were directly taking orders from the US Government, be it for handing over Raymond Davis, Air Bases, or allowing night-time raids, drone attacks, supply lines, or air corridors. From hunting down Afghan Taliban fighters to stifling the Kashmir Jihad, all has been done on clear US directives without a shadow of doubt.

So why this debate then? Is there really anyone who sincerely believes that Imran Khan was any different? If so, have they forgotten that it was him who invited Trump to intervene on the Kashmir issue ? Or are they unaware of the op-ed that he wrote for the Washington Post in which he after claiming credit for bringing the Taliban to the negotiating table for the US lists the different modes in which he wants the US to get involved in Afghanistan ? What about the implementation of FATF’s 34 action points and 27 items in letter and spirit for which Imran Khan tasked Energy Minister Hammad Azhar ? Didn’t we reach new lows during Imran Khan’s period when the sovereignty of our State Bank was surrendered on the directives of the IMF by passing a law through the parliament after having appointed their employee as its Governor ? Wasn’t the US still controlling Afghanistan during Khan’s government through the same framework of cooperation in terms of Air Lines of Communication (ALOC) and Ground Lines of Communication (GLOC) in place since 2001 ? Wasn’t Hafiz Saeed sentenced to 31 years during his premiership ? And what to talk about the current government, who proudly announce being beggars and asking for Chinese loans, Russian-funded pipelines and access to European markets at any cost. Current Finance Minister Miftah Ismail’s recent trip of the US should be enough to assure the IMF of complete and continued subservience of their policies .

Now as both the opposition and government are no different in their subservience to the US, dictates and blatant interference has become the norm, what is the way forward for becoming truly independent? How can we truly tell them ‘No More’ in reply to ‘Do More’? What would an actual ‘Absolutely Not’ be like?

For this we will need to understand that the US interference in our countries goes far beyond the conversations of their Donald Lus with our Asad Majeeds. It is much more than Ilhan Omars meeting Imran Khans and Javed Bajwas. What is it then? It is a very sophisticated and intricate system of institutions which ensures our enslavement since many decades and continues to control us through these institutions.

There are four primary mechanisms of this sophisticated system which we need to understand if we are truly interested in becoming free from foreign interference and conspiracies. These four mechanisms are as follows:

Let’s start with international institutions, such as the United Nations (UN), International Monetary Fund (IMF), World Bank (World Bank), Financial Action Task Force (FATF), International Atomic Energy Agency (IAEA), Sustainable Development Goals (SDG), various Human Rights and Freedom rankings and indices and the judicial bodies like the International Court of Justice (ICJ). As a case in point, let’s consider IMF. How come are we a free country when the top bureaucrats from the Federal Board of Revenue, Finance Ministry, Energy Ministry, Petroleum Ministry, Power Ministry, Commerce Ministry take all our data and accounts to Washington so that they prescribe us where to give subsidies and where to withdraw them, fix the price of petrol, gas and electricity, decide the rate of income tax, import duties, export targets, fiscal deficit, primary balance, current account deficit and the list is unending! Similarly, our Kashmir policy is in the hands of United Nations. The World Bank decides which projects we are allowed to invest in and which we are not. IAEA controls and keeps check and balance of our nuclear assets, which are one of the world’s largest. ICJ prohibits us from dispensing justice by punishing the convicted Indian spy, Kulbhushan Jadhav, making a mockery of our judiciary and intelligence agencies.

The second mechanism used by the West is through the various systems and institutions which we have, over the years, voluntarily or involuntarily, adopted. Be it democracy, capitalist economic practices, common law, the education system, the penal code or many other such systems; they all strengthen the grip of the West on our countries. Even the Constitution, touted by some as a sacred document is written in a way to preclude the implementation of Islam and grant the rulers backdoors through which they can escape accountability. Take for instance democracy; it ensures that whatever wrongdoing is committed by the rulers lies within the ambit of law by legalizing it through the parliament. So pick-pockets, street criminals, swindlers and the like are not tolerated in this system, but the white-collar criminals sitting in the parliament, wearing Western dresses and putting on English accents can never be proven guilty because the whole system is actually designed to safeguard them. They legally collect and siphon out our country’s wealth into the coffers of the IMF and Western countries. Let’s take the much-hyped Sehat Card scheme as another case in point, which is nothing but a way to privatize healthcare benefiting insurance companies and private hospitals resulting in steep cuts in funding to public hospitals. Or take power generation which has been taken from WAPDA and given to private companies, who have such lucrative (legal) agreements that they receive ‘capacity payments’ meaning they get paid regardless of whether they produce or sit idle. The parliament was used to grant State Bank autonomy from the very same parliament on the dictates from the IMF. The capitalist economic practices have marred our economy for decades now. Interest (riba) is a cornerstone of the capitalist economic system and it is as much an integral part of our economy as it is theirs, despite the clear injunctions of Allah (swt) denouncing it as an open war with Him and His Messenger in Surah Al-Baqarah 275. Convicted killers and gangsters walk freely because of presidential pardons which is a right of the President enshrined in Article 45 of the Constitution. , As for the Education system, though it is alright to adopt in matters of science, which is based on facts and the study of reality but it is absolutely impermissible to take in matters which are a result of a specific worldview. Social Sciences, including Economics are a good example to understand this. The Western worldview deems resources as scarce and suggests more and more production as a solution whereas Islam views resources as enough and ensures that wealth doesn’t circulate among a few rich people, which is exactly what happens under capitalism. Similarly Sociology, Anthropology, Policy etc. are all subjects which when taught from a Western worldview take us further away from Islam. Unfortunately our top institutions today are those which have mastered these very subjects, be it LUMS or IBA.

The third mechanism is through their agents. It is important for us to understand what it means to be a Western agent. It is the ruling elite which is in awe of the above-mentioned Western institutions, systems, thoughts, ideas, ideals and solutions. They whole-heartedly believe in the intellectual superiority of the West and deem Islam and its solutions as something of the past. They see Westerners as their saviors and their systems as the only way forward. Their love for these Western systems manifests itself from the adjectives they use to describe them, such as progressive, modern, practical, evolutionary etc., whereas when it comes to Shariah law, the adjectives most frequently used are backward, old-fashioned, barbaric, regressive etc. Miftah Ismail’s recent mocking of the divine orders of Amr bil Maroof and Nahi anil Munkar in front of his US Masters is not one fringe incident rather the norm . This extreme reverence for everything Western and extreme hatred for everything Islamic is evident from all their actions and any aberration from this should be seen as a political stint to exploit people’s love for Islam. Be it their dress, education, training, residence, investments, references, solutions, thinking, everything is ‘imported’. They look at our problems through Western glasses. As if this was not enough of a crime, they are feeding the people with these insecurities as well.

Unfortunately, our military leadership is not lagging behind compared to their civil counterparts in their infatuation with the West, which can be seen from Bajwa’s recent statements during the Islamabad Security Dialogue . Even the sincere ones among this ruling elite are so intellectually enslaved by Western ideology that they are even more dangerous than the insincere ones. They are unknowingly undermining Islam by strengthening Western institutions and thereby harming the generations to come. Their foreign degrees are actually harmful because what they advocate has no foundation in Islam.

4. Physical presence in our Lands

The fourth mechanism employed by the West to ensure full control of our countries is their physical presence. When the above three mechanisms are well in place and working fine, this physical presence is limited to their embassies and consulates but when their control is shaky, they don’t hesitate to send boots on ground. Western troops in Afghanistan, US troops in Iraq, Russian jets in Syria and Indian troops, by the permission of the US, in Kashmir are just a few recent examples to mention. This interference needs to end, and embassies of belligerent countries should be completely ousted while those who are allowed to remain should be cut to size by clearly defined roles limited to visa issuance and other related matters. What else than housing mercenaries and marines like Raymond Davis does the US need a 37-acre compound in the heart of Pakistan’s capital Islamabad ?

We are living in unprecedented times where the challenges are enormous but so are the opportunities. The World is as divided and polarized as perhaps never before. We are on the brink of a third World War where an embattled Russia is weighing its options of a nuclear war. The sanctions imposed by the US and its allies are harming Europe as much as Russia. Relations between India and China have been worsening in recent months. The two world powers are facing off against each other along their disputed border in the Himalayan region. After Brexit and a far-right take-over in many European countries, Europe’s unity is an illusion. The world stage is set for another global order which would free the Muslim lands from this institutional colonialism and put us on the road to progress. What better time would be there for saying no to the West and establishing a global Caliphate which would unify the Muslim countries under a single leadership, free Kashmir from the clutches of India and liberate Al-Quds from the Zionist state? So let us reject the current system and work for the re-establishment of the Khilafah (Caliphate) on the Method of Prophethood.