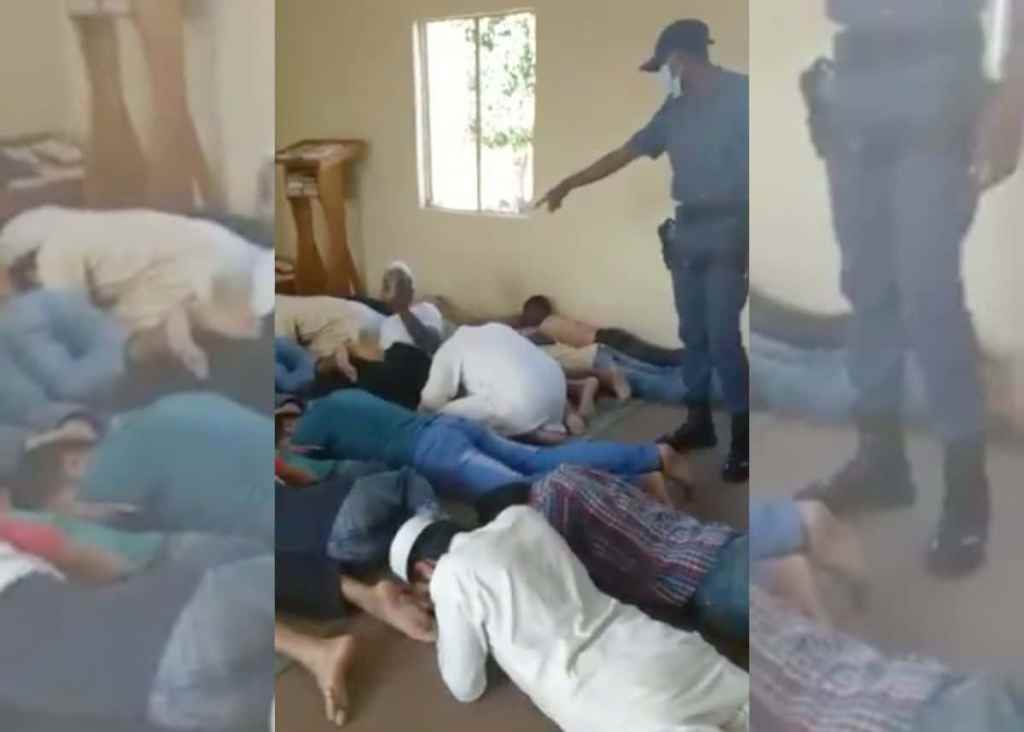 “If they meet you, they would be to you as enemies and extend against you their hands and their tongues with evil”

In the fight against the spread of the novel coronavirus, the South African police force raided a room on Saturday, 25th April, where about 20 Muslims were praying, and ordered them to the ground. The video footage posted on social media and authenticated by the state authorities, showed humiliation to Muslims with one police heard saying: “Are you bigger than President? Is Muhammad bigger than President?” According to Aljazeera, South Africa’s police minister Bheki Cele apologized for a “blasphemous” remark made by a policeman. Cele said an ‘urgent investigation’ was launched ‘to establish the identity of the person behind such sacrilege.’

It is crystal clear the capitalist regimes have been depressed in its war against the spread of the Coronavirus infection. As an attempt to conceal their failure and under the guise of stepping up against the infection of the virus, they now stretch their claws by ordering their security apparatus to cause mayhem against its own citizens. The police brutality witnessed in South Africa has also been seen in Kenyan policemen during the first days of Kenya’s dusk to dawn curfew. A Humans Right Watch has said at least six Kenyans died from the police violence during the curfew that now enters into second month. This situation exposes that security personnel under Capitalist regimes is primarily tasked to protect the secure the lives of the state officials and not the common man. It has further shown that brutality and torture are the only standard tool of the secularist governments.

The humiliation of Muslims along with the insult against the Prophet ﷺ comes in the wake of the closure of the Houses of Allah in which He has permitted His name to be raised. This affirms that Capitalists and their puppets spare no effort to harm the Muslims. Allah (swt) says: إِنْ يَثْقَفُوكُمْ يَكُونُوا لَكُمْ أَعْدَاءً وَيَبْسُطُوا إِلَيْكُمْ أَيْدِيَهُمْ وَأَلْسِنَتَهُمْ بِالسُّوءِ وَوَدُّوا لَوْ تَكْفُرُونَ “If they gain dominance over you they would be to you as enemies and extend against you their hands and their tongues with evil and they wish you would disbelieve.” [Al-Mumtahina: 2]

Sadly, despite this open hostility towards Islam and Muslims, yet some Muslims still take the opportunist Democratic politicians as their intimates who always under their rotten system of Democracy insult Islam, deprive the Muslim dignity as well mocking the Islamic sanctities. Allah (swt) says: يَا أَيُّهَا الَّذِينَ آمَنُواْ لاَ تَتَّخِذُواْ بِطَانَةً مِّن دُونِكُمْ لاَ يَأْلُونَكُمْ خَبَالاً وَدُّواْ مَا عَنِتُّمْ قَدْ بَدَتِ الْبَغْضَاء مِنْ أَفْوَاهِهِمْ وَمَا تُخْفِي صُدُورُهُمْ أَكْبَرُ قَدْ بَيَّنَّا لَكُمُ الآيَاتِ إِن كُنتُمْ تَعْقِلُونَ “O you have believed do not take as intimates those other than yourselves (believers) for they will not spare you (any ruin) they wish you would have hardship. Hatred have already appeared from their mouths and what their breasts conceal is greater. We have certainly made it clear to you the signs if you will use reason” [Al-i-Imran: 118]

For the Government claiming to seek an apology to Muslim community and that it will launch an urgent investigation, this has proved a high rank of mockery by the secularist rulers which after detaching Allah’s commands form the realm of life, they have gone beyond to mocking the servants of Allah who adhere to His rulings. Does it sound rational for the same regime which had ordered its police officers to demean Muslims then expected to bring the assailant to the book? The act of comparing the Noble Prophet ﷺ with corrupt Capitalist leaders who the curse their citizens and the citizens to curse them is considered a grave insult.

A criminal act against Muslims in South Africa will not deter them from abiding them to the religion. This act is one of the series of horrendous acts against the Ummah across the globe including the occupation of the blessed land of Filastin (Palestine), spilling of the blood of Muslims in the Middle East and the desecration of the Quran including many evils. Since the Ummah has lost its shield –Khalifah whose one of his responsibility is to protect the sacred of Islam then it has witnessed all these hostilities and miseries. The Khalifah – a devoted leader who shall issue the death penalty to anyone daring to insult the Messenger of Allah ﷺ. It is therefore mandatory for Muslims as they observe the auspicious of Ramadhan to double their efforts toward re-establishing the Khilafah (Caliphate) the only Government that is entitled to protect the dignity of the Ummah and its sanctities.