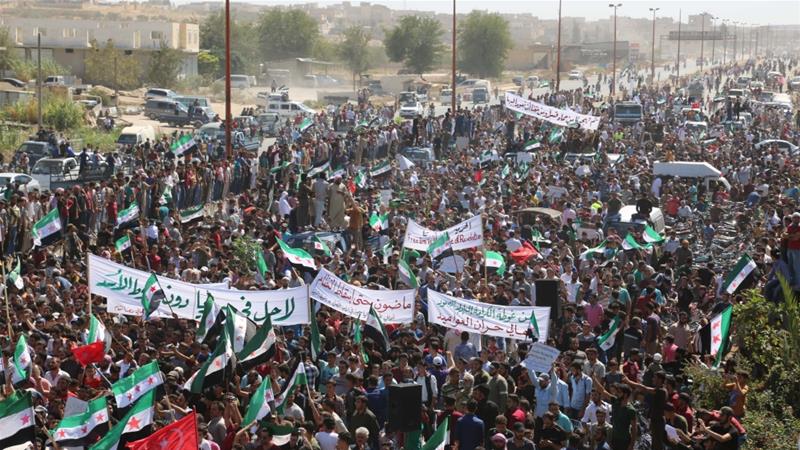 The drums of war are beating once again in the battle for Syria. Bashar al-Assad’s forces and his counterparts in Moscow and Tehran are gearing up for what is looking to be the final stand in this 7-year-old battle. There is now near daily news on air strikes, troop movements, Turkey criticising the on-going onslaught and the US threatening intervention if chemical weapons are used. All the participants in this battle have presented a narrative in order to hide their true intentions and to subvert what they are really doing. We know truth is the first casualty of war and this makes it even more important to separate fact from fiction.

Erdogan and his cronies have always presented their actions as helping the rebel groups against the dictator Bashar al-Assad. Turkey from the earliest days of the uprising housed defectors from the Syrian army and trained and armed them before sending them back as the Free Syrian Army (FSA). Through Operation Shah Euphrates and Euphrates Shield, Turkey has established a military presence in North Syria and in Idlib, it has multiple bases (although it calls these observation posts).

But despite this presence Turkey has done little to actually aid the rebel groups or Muslims of Syria against the regime. Turkey never provided any rebel groups with the heavy weapons that would make a difference, or the surface-to-air missiles and it used them to achieve its other narrower goals. In the battle for Aleppo Turkey forced the rebel groups it backed to leave the city and fight in the Euphrates Shield operation in the northern Kurdish areas. This weakened the rebel response in Aleppo, leading to the fall of the city. Earlier Turkey had pushed rebels in Idlib to co-operate with a de-escalation agreement it had negotiated with Russia and Iran.

Turkey has insisted any military solution for Idlib would be a catastrophe, but not because it would lead to the mass slaughter of the people, but for another reason which Turkish presidential spokesperson Ibrahim Kalin revealed in a meeting on Friday 14 Sep with representatives of France, Germany and Russia. Kalin revealed, “Everyone’s common point is that the solution must be political rather than military.” Kalin said there is a general consensus that the consequences of a possible attack on Idlib will be very serious and it will cause humanitarian crises and a new wave of migration. “Of course, a new wave of migration would not only put burden on Turkey. It could cause a new chain of crises from here to Europe.”[1] Turkeys concern is with the migration that will ensure, rather then the fact the Muslims of Syria are bring slaughtered. What confirms this further is the Russian airstrikes to soften ground targets for the impending ground invasion.

Russia has assembled a naval armada off the Syrian coast, comprising 25 ships, combat aircraft and the missile cruiser Marshal Ustinov. The fleet is ostensibly engaged in exercises. But Dmitri Peskov, the Kremlin’s spokesman, admitted the drills were directly linked to Idlib. Russia Sevastopol naval base in Crimea is over 600 miles away from Syria and between Crimea and Syria lays Turkey. These war machines all sailed through the Bosporus to get to Syria. Despite Turkey allowing passage, Turkish leaders are insisting they are supporting the rebel groups. Turkey leaders have supported the overall aims of the other powers in Syria, despite differences on operational details.

The most the US could muster on the upcoming slaughter was at a news conference in Jerusalem, where John Bolton revealed: “We are obviously concerned about the possibility that Assad may use chemical weapons again,” Bolton said. “Just so there’s no confusion here: if the Syrian regime uses chemical weapons, we will respond very strongly, and they really ought to think about this a long time.” Russia, Iran and Al-Assad have used siege tactics, starve and surrender tactics, indiscriminate targeting of hospitals, schools and infrastructure, but US officials could only bring themselves to criticise the possible use of chemical weapons, which rings hollow when the regime has used them so many times and the US merely threatened and did nothing to the regime. If there was any doubt, after seven years of war this has been the US policy – criticise the regime but do nothing, which in any scenario is implicit support and cover for the regime.

For Bashar al-Assad taking back Idlib would be a huge propaganda victory as it would mean, despite losing most of the country in 2015, he would now have taken nearly of it back and would use this as a symbol of his regime’s legitimacy. Syria, Iran and Russia regularly put out propaganda that they are fighting terrorists in the Idlib governorate for cover for their crimes. At the same time al-Assad has pushed the narrative that Syria and Turkey have opposing aims, Assad constantly accuses Erdogan of supporting the terrorist groups and has tried to develop a ‘them and us’ narrative. Whilst Erdogan and al-Assad do not see eye to eye on many issues, they are on the same page about the rebel (terrorist) groups, they just disagree on the method to deal with them.

But taking back Idlib will not be easy. It will be harder and more complicated than many of the other recent campaigns in the south of the country. It is a much larger region than the areas in the south, such as Daraa, Eastern Ghouta and Quneitra, that the Syrian army seized in recent months. It is, more heavily populated with rebels because many of the cease-fires brokered in the south allowed rebels’ safe passage out of these areas and into Idlib. Al-Assad would have to confront a far greater number of fighters in Idlib than he did in battles in southern Syria, making the fight bloodier, costlier and far less predictable. Although al-Assad has recently reconsolidated his hold over large portions of the country, a substantial segment of his army is not capable of carrying out offensive operations, since it’s mainly used for garrison duties. This means that the heavy casualties the Syrian army is likely to incur will be among Assad’s most experienced and well-trained contingents – which may encourage rebels to challenge the regime in other territories, knowing its resources will be stretched to the limit.

In conclusion the future of Syria has been largely taken out of the hand of the people of Syria. All the surrounding regional powers and global powers are vying for territorial control as a means to determine the final settlement to this 7-year-old conflict and maintain their influence within the nation. It is a great shame to see the Muslim world aiding and abetting the impending carnage of Idlib. At the forefront of this treachery is Turkey a country that has covertly conspired with Russia and America to make the destruction of Idlib a reality.