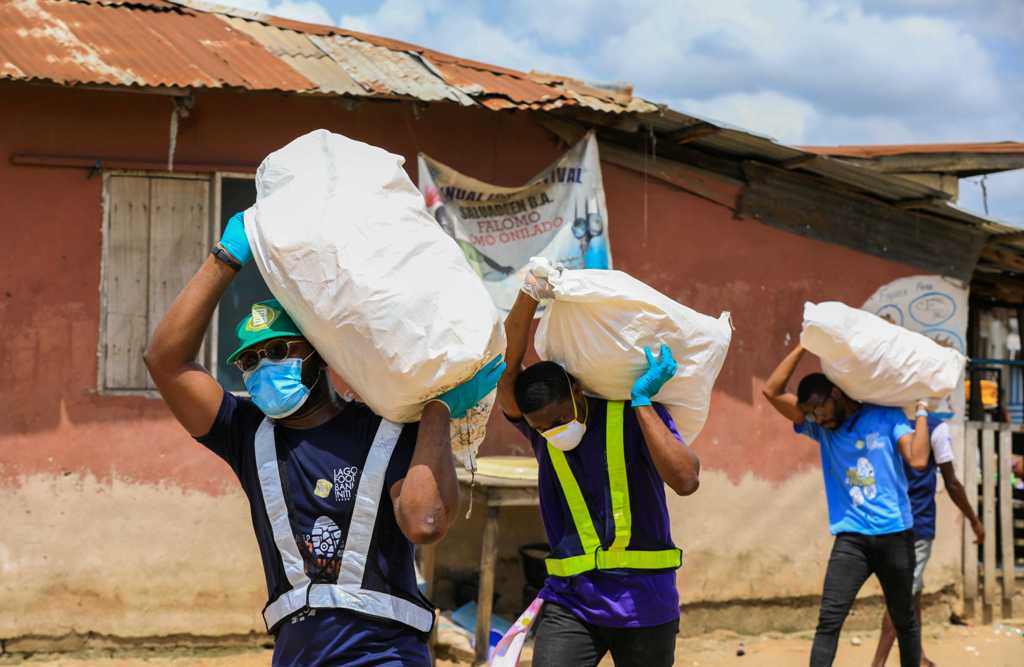 On the 5th of May, the media reported that the UN Humanitarian Chief, Mark Lowcock, warned that the number of people starving to death could double by the end of the year due to the economic fallout of the management of the coronavirus pandemic by governments across the world. In April, a report by the UN’s World Food Program (WFP) also warned that the world was facing a ‘hunger pandemic’ due to the crisis, with the prospect of famines in three dozen countries which could double the number of people suffering acute hunger, pushing more than a quarter of a billion people (265 million) to the brink of starvation.

The WFP Director, David Beasley, stated that the world could face multiple famines “of biblical proportions within a few short months” and that there was “a real danger that more people could potentially die from the economic impact of COVID-19 than the virus itself.” His words were echoed by Kurt Tjossem, Regional Vice President for East Africa at the International Rescue Committee, who stated that the effects of the lockdown measures, “may cause more suffering than the disease itself.” The national lockdowns imposed upon various populations have prevented people’s ability to buy basic goods, dried up work and caused sudden loss of income for millions who were already living hand-to-mouth. They also have the high potential of disrupting agricultural production and causing problems in the transportation of food to markets.

Of the ten countries singled out as particularly at risk of starvation due to the poor management of the crisis, half were those in the Muslim lands: Yemen, Afghanistan, Sudan, Syria and Nigeria. In Lebanon, people in its poorest city Tripoli defied lockdown measures earlier this month, due to hunger which is raging through its neighbourhoods, with crowds firebombing banks due to intense anger against the government for its criminal management of the economy and the pandemic. A journalist from the UK Independent Paper covering events in the country wrote, “Here in the poorest districts of Lebanon’s second largest city, the possibility of contracting coronavirus comes second to the certainty of starvation.”

These man-made famines resulting from the COVID-19 lockdown measures imposed by governments, simply magnifies the dire economic problems which were already existent under the disastrous capitalist system implemented within states across the globe. Even before this pandemic, a hunger crisis was already gripping the world. According to the international relief agency Mercy, 9 million people die of hunger every year (that’s almost 25,000 every day) – more than the death toll of AIDS, malaria and TB combined. The agency also stated that 1 in 9 people in the world go to bed hungry each night; 20% of children around the world are undernourished; and every 10 seconds a child dies from hunger. However, Mercy also states that there is 17% more food available per person globally than there was 30 years ago, and if evenly distributed would be enough for every person alive today to get more calories than the minimum required for proper health – highlighting food surplus rather than shortage in the world. This criminal level of global starvation is simply another toxic fruit of Capitalism and the huge inequality it creates in access to wealth and other resources, including food – both between and within nations. How can it be for example, that in Nigeria, Africa’s largest economy and top oil exporter and where almost 40% of its land area is arable land – that 40% of its population live below the poverty line, living on less than $1 a day (according to its National Bureau of Statistics)? It is a result of decades of flawed capitalist policies as well as endemic corruption which led it to become one of the top countries in the world prone to starvation. All this is proof enough of the abysmal nature of the capitalist system which destroys economies, impoverishes populations and is not fit for purpose with regards to governing humanity.

Furthermore, the blanket lockdown measures imposed within our Muslim lands were a result of trying to desperately prevent the overwhelming of their crumbling health care services which have suffered decades of chronic underfunding, again due to their flawed capitalist economies and the indifference of successive non-Islamic regimes to the needs of their people. These governments completely disregarded the disastrous impact that such extensive restrictions would have upon their people, choosing instead to ‘Copy and Paste’ the response of western capitalist states who have also plunged millions of their citizens into hunger and financial catastrophe, or blindly follow the advice of the WHO, an institution also born from the womb of a Capitalist world order. They failed dismally to carefully evaluate the extensive implications upon their populations of their measures or take steps to effectively mitigate the crippling economic impacts upon them.

O Muslims! For how much longer will we follow the Capitalist path that leads to nowhere but disaster? For how much longer will we accept for these corrupt and intellectually bankrupt regimes who care nothing for our wellbeing to rule over us? And for how much longer will we fail to see that our salvation from oppression and suffering lies only in re-establishing the System of Allah (swt), the Khilafah (Caliphate) based upon the method of the Prophethood, which alone embodies the sound principles and laws to successfully govern humankind for they are from the One Who has All-Knowledge and All-Wisdom. Allah (swt) says, ثُمَّ جَعَلْنَاكَ عَلَى شَرِيعَةٍ مِّنَ الْأَمْرِ فَاتَّبِعْهَا وَلَا تَتَّبِعْ أَهْوَاء الَّذِينَ لَا يَعْلَمُونَ “We have put you on the right way in the matter (of divine law (the Shariah)). So follow it, and do not follow the fancies of those who do not know.” [Al-Jathiya: 18] While this system, the Khilafah continues to be absent from our lands, our Ummah, and indeed humankind, will know nothing but oppression and suffering. Allah (swt) says, فَإِمَّا يَأْتِيَنَّكُم مِّنِّي هُدًى فَمَنِ اتَّبَعَ هُدَايَ فَلَا يَضِلُّ وَلَا يَشْقَى * وَمَنْ أَعْرَضَ عَن ذِكْرِي فَإِنَّ لَهُ مَعِيشَةً ضَنكًا وَنَحْشُرُهُ يَوْمَ الْقِيَامَةِ أَعْمَى “Whoever follows My Guidance shall neither go astray, nor fall into distress and misery. But whoever turns away from My Reminder (That is, neither believes in the Qur’an nor acts on its orders) verily, for him is a life of hardship, and We shall raise him up blind on the Day of Resurrection.” [Ta-Ha: 123-124]